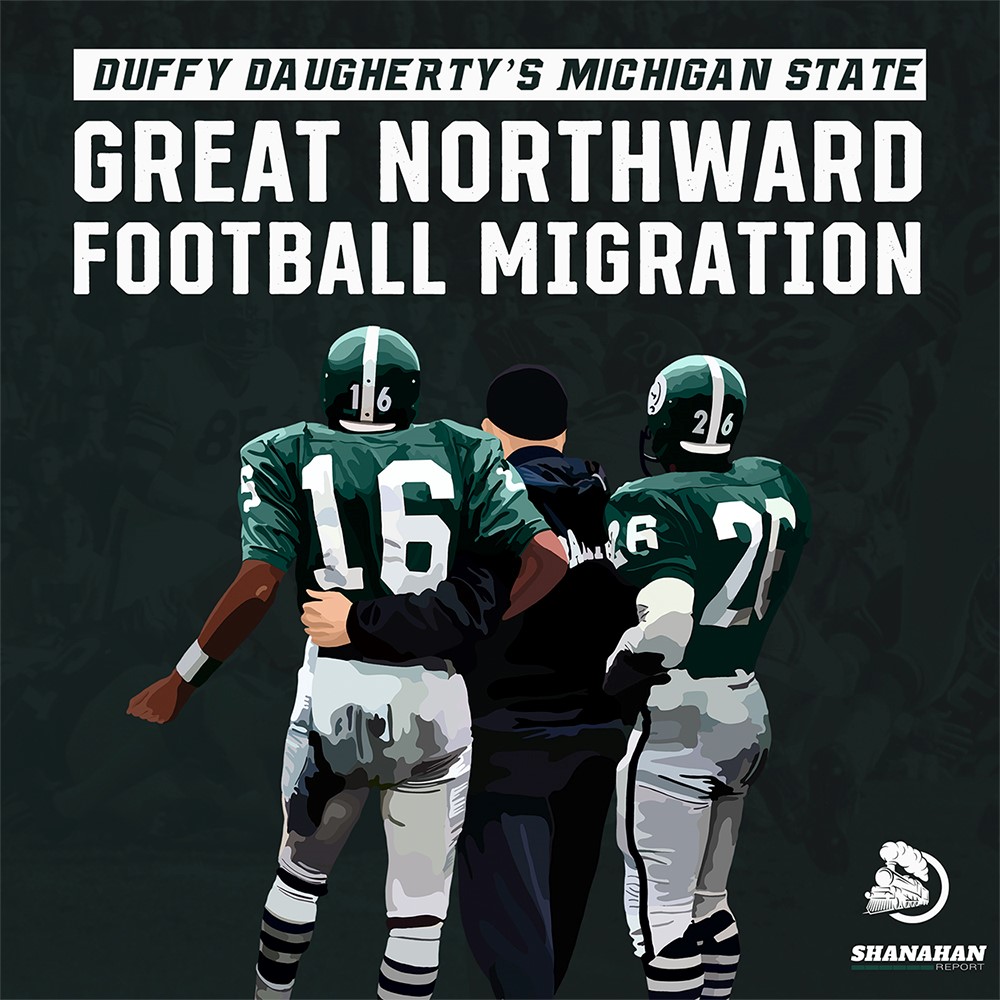 Research for these lists date to 2012 and writing “Raye of Light: Jimmy Raye, Duffy Daugherty, the 1965-66 Michigan State Spartans and the integration of college football,” August Publications. Foreword by Tony Dungy.

Duffy Daugherty’s Michigan State ground-breaking 1960s teams with a Great Northward Football Migration featured giants of the game recruited from the segregated South. They added to Michigan State’s history of Black stars leading Midwest-based rosters. Daugherty’s teams with players escaping the segregated South were called the Underground Railroad, a metaphoric nod to Harriet Tubman’s courage to use secret passages and safehouses to lead slaves to freedom.

Daugherty also was diversity pioneer with his Hawaiian Pipeline. The stars recruited from Hawaii launched tsunami wave of Polynesian talent that permeates all levels of football.

— 1959 to 1972, 44 passengers boarded, escaping segregation for East Lansing. Their hometowns in the South represented 10 of 13 Jim Crow states — all but Maryland, Tennessee and Alabama.

— 1965 national champion (10-1), named by United Press International (now USA Today), the National Football Foundation and as co-champions by the Football Writers Association of America (Alabama, 9-1-1, was voted Associated Press champion and FWAA co-champ). The Spartans had 23 Black players and 10 Black starters during a period with segregation in the South and a status quo at integrated schools limiting rosters to a half-dozen or fewer Black players.

— 1966 national champion (9-0-1), named co-champions by the National Football Foundation. Michigan State and Notre Dame played to a 10-10 in the Game of the Century and finished with 9-0-1 records. The Spartans were the future with 20 Black players and 11 Black starters and a starting Black quarterback, Jimmy Raye. Notre Dame was the past with one Black player.

— First pair of Black team captains as voted by players, without a white teammate sharing the role, George Webster and Clinton Jones.

— First Underground Railroad player, Clifton Roaf, Pine Bluff, Arkansas, 1959. Roaf never played a down due to a knee in spring football his freshman year. Yet, he said he remained “indebted to the people of Michigan State” for his degree. He returned home to Pine Bluff as a dentist for 40-plus years. “

— Academic record: Of the 44 Underground Railroad passengers, 30 graduated (68 percent). Only 10 earned All-Big Ten or All-American honors. Daugherty’s scholarship players were about more than football. By contrast, in the 1980s the national graduation rate for Black football players was 30 percent, forcing the NCAA to crack down on schools exploiting Black athletes.

— Black Coaches: Daugherty hired two pioneering Black college assistant coaches who went on to careers as NFL offensive coordinators, Sherman Lewis and Jimmy Raye. Daugherty hired Don Coleman among the nation’s first Black college assistant coaches in 1968, but Coleman didn’t stay in coaching. Coleman was a College Football Hall of Famer from Flint, Michigan. Lewis coached at MSU 1969-80, and 16 NFL seasons, with four Super Bowl rings, XIX, XXIII, XXIV, XXXI. Daugherty hired Raye at MSU 1971-75, and Raye coached 36 years in the NFL. He was one of the first Black offensive coordinators with the Los Angeles Rams in 1983. When the San Francisco 49ers hired Raye in 1977, there were only seven other Black assistant coaches among 28 teams.

— The Next Generation coaches: Two Black recruits in Daugherty’s final 1972 recruiting class entered coaching. In addition to Willingham, quarterback Charlie Baggett, who had been recruited by Raye out of E.E. Smith in Fayetteville, N.C., transferred from North Carolina to Michigan State in 1972 when he was moved from quarterback to wide receiver. Raye and Lewis mentored both Willingham and Baggett in their coaching careers at the college and pro levels. Baggett coached 14 seasons over two stints at Michigan State, including as an associate head coach, 1995-98. He coached 11 years in the NFL, including as an associate head coach with the Miami Dolphins, 2005-06.

— Final Underground Railroad class: Willingham was one of six Black players from the South in his final recruiting class. Six was more than entire rosters at the last three Southeastern Conference schools to desegregate in 1972, University of Georgia (3), Louisianan State University (one) and University of the Mississippi (one).

— First four Black players from the same class enshrined in the College Football Hall of Fame was another Michigan State milestone. They also formed the first four in the same class since from any school 1940.

— Bob Apisa was enshrined with the 2018 class. He is considered the godfather of Polynesian football as the first Samoan All-American player in the 1965 and 1966 seasons.

— Charlie Wedemeyer was enshrined with the 2021 class.

— Bob Apisa, Honolulu Farrington, was the first Samoan All-American player as a two-time All-American pick, 1965-66. He is credited with launching the wave of Polynesian talent that permeates football at all levels. Apisa was drafted by the Green Bay Packers when Vince Lombardi served as general manager, but knee injuries cut short his chances.

— National co-champions: Michigan State and Notre Dame played to a 10-10 tie before overtime rules and finished with 9-0-1 records. They were named co-champs by the National Football Foundation. Notre Dame entered the game ranked No. 1 and MSU No. 2. The AP, UPI and FWAA polls kept Notre Dame No. 1.

— NFF’s Vincent DePaul Draddy: “The reasons are rather obvious why we divided the award. It seemed like the only fair thing to do with a couple of excellent teams like Notre Dame and Michigan State.”

— Terry Hanratty, Notre Dame’s quarterback: “I still say to this day those are the two best teams to ever play each other. You look at the amount of talent that was on both sides of the field.”

GAME OF THE CENTURY QUARTERBACK QUOTES

— Jimmy Raye on Duffy Daugherty starting a Black quarterback: “Daugherty was one of the most courageous persons I’ve had the privilege to be associated with in my athletic career. I can only imagine the pressure he must have been under and received when he made the decision to make me the starting quarterback in the mid-1960s. Most of the things that happened to me in my coaching career — if not all — came as a direct result of the opportunities he gave me. I will be forever grateful for the courage he had and the kind of individual he was to give a chance to a young man who was denied a chance in the South to pursue and academic and athletic career.”

— Terry Hanratty on Michigan State as his second choice to picking Notre Dame: “Duffy Daugherty was such a wonderful human being. No one can ever turn me against Michigan State. When I told Ara (Parseghian) I was coming to Notre Dame, I knew I had to call Duffy. I’m thinking, ‘This is going to be horrible’ because you hear all these stories about coaches jumping on kids. I told Duffy, and he went on for 20 minutes about what great school Notre Dame was and what a great guy Ara was. He made that very difficult call for a 17-year-old kid special. I’ll always have a fondness for Michigan State because of Duffy.”

NOTE: None of the Underground Railroad players were sent to Daugherty by Alabama coach Bear Bryant. There have been many myths created to obfuscate Bryant’s foot dragging on desegregation, and they have been at the expense of Daugherty and other true 1960s pioneers. Bryant was forced to state in a 1969 deposition he was unaware of an African-American football recruits. He had been sued by the Alabama Afro American student association for failing to recruit Black athletes despite the campus having desegregated in 1963.

Here’s what Dunnavant and Bear Bryant’s Alabama apologists don’t tell you when they claim Alabama was robbed a third straight national title based on reverse racism. They say since Alabama won 1964 and 1965 national titles, voters decided a segregated team can’t be voted No. 1. This ignores that Texas was voted national champion in 1969 as the last all-white team. It also ignores Alabama’s 1964 and 1965 national titles were both split. The NCAA recognizes four organizations as designating an official national champion:

So, how does the three-year period add up for the teams?

With one point for each NCAA official national title designations for a total of 12, here are the numbers:

When the combined records for the three school’s with titles spanning two seasons, here are the totals:

By any accounting, Alabama didn’t dominate the 1964 and 1965 seasons as Bear Bryant’s apologists for his poor segregation record want college football fans to believe.

Another difference to consider is Alabama never played any of its 22 games in 1964 and 1965 above the Mason-Dixon Line and 21 of their 22 opponents were all-white teams. The same is true in 1966, when eight of 11 games were played within Alabama’s state borders. There were four at Legion Field in Birmingham, three at Denny Stadium in Tuscaloosa and one at Ladd Stadium in Mobile.