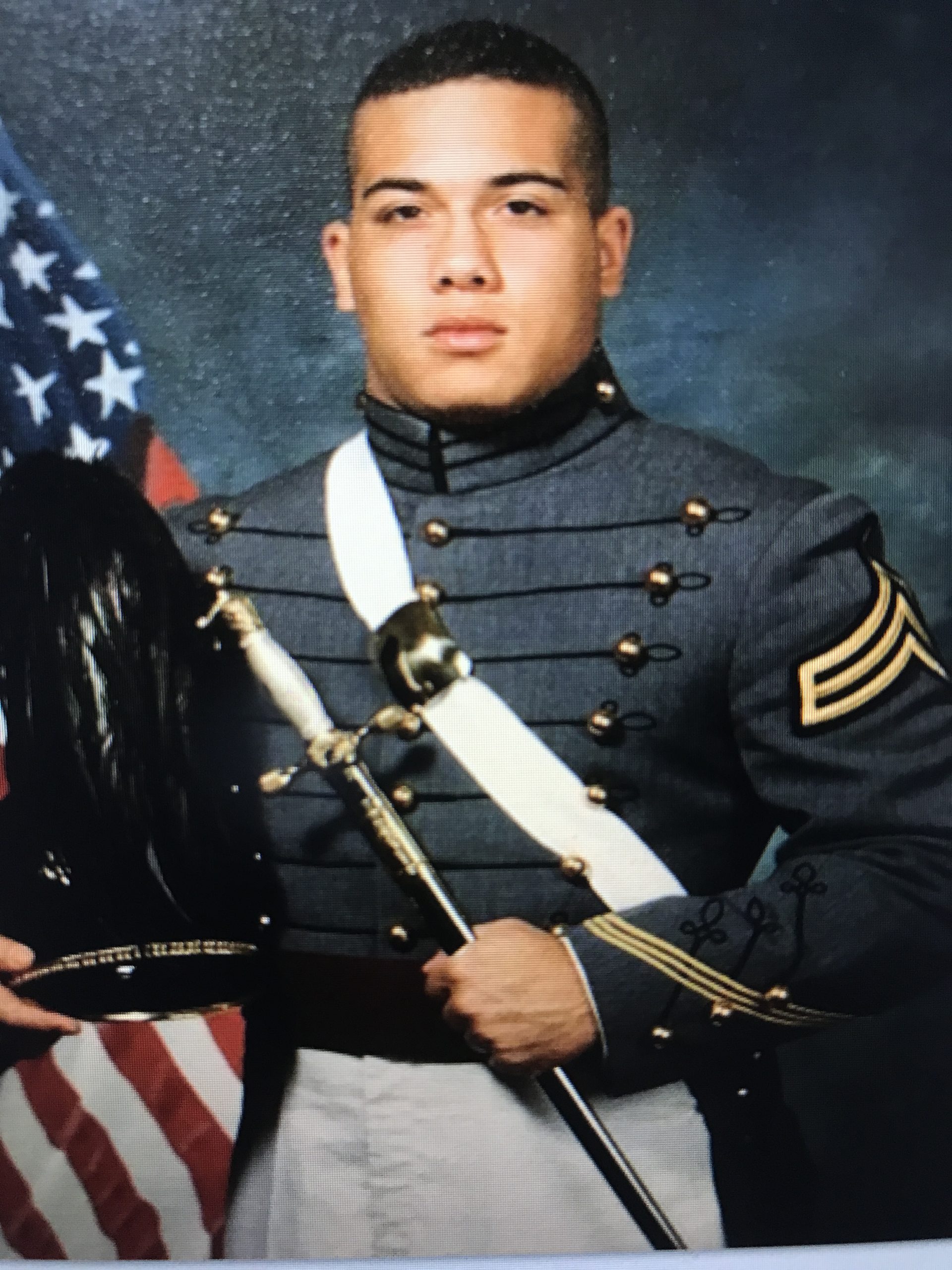 Ernie Pasteur recently returned from Memphis to his home near Michigan State’s campus, the center of his universe since he left the segregated South nearly 60 years ago. On the Memphis trip, his role was as a 76-year-old grandfather.

Memphis was the latest stamp in a passport to opportunity that Michigan State College Football Hall of Fame coach Duffy Daugherty presented Pasteur in 1963 in the form of a scholarship. Pasteur had grown up a University of North Carolina fan in Beaufort, N.C., but the Tar Heels weren’t an option for an African-American. UNC’s football program remained segregated until 1967.

“Not in a million years could I have dreamed of all things that have happened to me,” Pasteur said. “When I came to Michigan State, I was the luckiest person in the world. I’m blessed to have had the opportunities, especially coming from the segregated South with all the things we went through in those days.

“The highlight of my life was earning three Michigan State degrees. It allowed me to have a successful career in high school administration and to provide for my family. I was able to retire when I wanted and do what I want to do – not what I have to do.”

What he wants to do in retirement includes wintering in Florida or South Carolina, two states that didn’t want a younger Ernie Pasteur.

Although a shoulder injury hindered Pasteur’s playing time, his degrees set up his future and his family’s foundation with his Michigan State bride, Micki. The legacy of Daugherty’s ground-breaking teams that led college football with its first fully integrated rosters extends far beyond its star players.

It was about education and the Next Generation.

Ernest Green, the first member of the Little Rock Nine to graduate from Central High in Arkansas, wasn’t a football player, but as a Michigan State graduate, he described the school as a “launching pad for people of color.”

With Pasteur’s passport, he has crossed paths with many luminaries. He was reminded of this last winter upon hearing the news Gen. Lloyd Austin was named the first Black Secretary of Defense. The same then-Maj. Lloyd Austin that Pasteur met through his son, a 1991 West Point graduate.

Austin was E.J.’s West Point tactical officer in a company of 125 cadets. A tactical officer provides direction needed to meet demanding academic and leadership requirements to become an officer upon graduation. E.J. served five years, including stationed in South Korea, upon retiring as a Captain.

“We had great respect for Lloyd Austin and how he comported himself,” said E.J., who also was a star wrestler on Army’s Top 25-ranked teams. “He was a true professional. As a young cadet who looked like me, he was a great leader. I had my share of academic problems. If it weren’t for him, I might not have graduated. I wouldn’t have had the idea that people that looked like me could go to West Point and be successful.”

E.J., understanding his father’s history escaping segregation, was motivated through the days of doubt that all West Point cadets experience. On average, a quarter of West Point incoming classes don’t reach graduation.

“I wanted to be able to show I could make my own way,” E.J. said. “I didn’t want to be a financial burden on my parents.”

Daugherty’s Great Football Northward Migration included Pasteur among 44 Black recruits from the segregated South between 1959 and 1972, the coach’s final season upon retirement. It was an adaptation of what historians call the Great Northward Migration, 6 million southern Blacks from 1915 to 1970 seeking factory jobs and freedom from Jim Crow state laws.

Sportswriters in the 1960s referred to Daugherty’s teams as the Underground Railroad, a metaphor intended as an heroic nod to Harriet Tubman outwitting slave holders. She bravely navigated secret routes and safe houses to lead escaping slaves northward.

Michigan State’s reputation for providing opportunity to African-Americans was well known throughout the South. Southern Black high school coaches respected Daugherty and tipped him off to talent. Pasteur’s high school coach, Earl Tootle, contacted Daugherty with the help of a white coach, Norm Clark, in neighboring Morehead City. Daugherty’s 44 Black recruits from the South represented 10 of 14 southern states — all but Alabama, Tennessee, Maryland and Missouri.

Pasteur’s passport gained an international stamp when he and Micki traveled to watch their son E.J. compete in the 1993 Pan American Greco-Roman wrestling championships in Caracas, Venezuela. E.J. won the gold medal for his weight class, adding his prize to the family sports collection that includes Ernie’s national championship rings.

In 2018, E.J. and Ernie were both inducted into the Greater Lansing Sports Hall of Fame. E.J. for his wrestling career that included a University Nationals championship and a high school career with All-State honors in wrestling and football. Ernie was a member of the Lansing Stars semi-pro team that was enshrined for its 28-0 record in 1969 and 1970. Pasteur was among former Spartans, along with quarterback Charlie Wedemeyer, offensive lineman Jerry West and linebacker Charlie Thornhill, on the team.

E.J. is one of three children Ernie and Micki raised along with two daughters, Nicole Dandridge and Traceen Pasteur. They also have three grandchildren.

Nicole was a lawyer in Michigan and Florida and now serves as the CEO of Van Andel Industries, an Amway company.

Traceen is a Project Manager with Cisco in Apex, North Carolina. Talk about the circle of life: She took a job in a state that was segregated when her father left it behind.

A grandson, Jacob Zimmerman, works with software for electric cars at Ford Motor Company. Another granddaughter, Indira Dandridge, just graduated from Howard University with a degree in business and marketing.

Clearing paths are at the root of Daugherty’s teams.

The nation saw Michigan State was the future and Notre Dame the past when a record TV audience of 33 million tuned in to watch the unbeaten teams meet in Game of the Century on Nov. 19, 1966 at Spartan Stadium. The Spartans had 20 Black players, 11 Black starters, two Black team captains, Webster and Jones, and the South’s first Black quarterback to win a national title, Jimmy Raye of Fayetteville, N.C. Notre Dame had one Black player on its entire roster, Alan Page.

The game ended in a controversial 10-10 tie, but the result on the future was decisive. Schools from the North to segregated South and East to West began to reshape their rosters in the late 1960s based on Daugherty’s teams.

Even Alabama, with coach Paul “Bear” Bryant dragging his feet on integration behind 5-of-10 Southeastern Conference rivals, joined the 20th Century by 1971. Elsewhere, schools such as USC abandoned unwritten quotas. USC had only five Black players on its 1962 national title team ad seven on its 1967 national championship roster. But by USC’s next national title in 1972 with 23 Black players, Trojans’ coach John McKay had caught up to Michigan State.

Pasteur had embarked upon his post-football journey by the 1970s, first as a high school teacher at Lansing Sexton. He earned his Masters degree and became and assistant principal at age 27 at Grand Rapids Union. He has a picture of himself in his time at Union taken with President Gerald R. Ford while the 38th president was on a return visit to his hometown.

Pasteur moved on as a principal at a reform school and later Superintendent at Maxie Boys Training School for adjudicated youth. His final career stage was as consultant establishing charter schools throughout Michigan.

Daugherty’s influence was a key to Pasteur’s first administration job. Pasteur coveted the Grand Rapids Union job despite difficult times on the campus in the 1970s. Union, with its Dutch family neighborhoods long populating Grand Rapids, initially struggled accepting Black students through a court-ordered bussing program. The N-word and racial epithets were thrown around.

“You’re damn right my Michigan State background was important,” Pasteur recalled. “Runkle told me, ‘Ernie, we’ve got problems at Union. We need a Black assistant principal that can identify with the kids.’

“We worked hard at it. We got the parents to come in. We got the kids together. I didn’t have any problems relating to kids, Black, white or whatever. We talked about Michigan State sports. Union became one of the best schools around.”

Pasteur, though, admits with a laugh it wasn’t just the students that wanted to talk Michigan State sports. Runkle asked Spartans football questions the first 30 minutes he interviewed Pasteur.

Then Runkle got down to business. He told Pasteur he had the job. Grand Rapids was another stamp in a passport provided by the coach most responsible for advancing college football integration.

On Father’s Day 2021, Ernie Pasteur and his Next Generations are a long way from the segregated South of 1963.