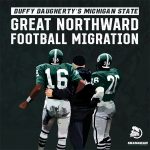 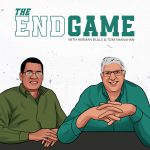 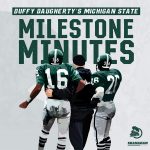 The Integration of Football

The Timing is Right to Reexamine the Bear Bryant Folklore 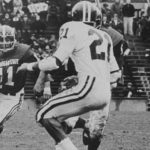 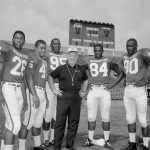 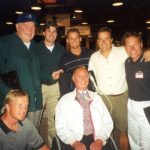 PHOTO: Charlie Wedemeyer’s athletic career spans his career at Michigan State, coaching at Los Gatos High in the Bay Area and his induction into the

All About
Raye of Light

When Jimmy Raye arrived at Michigan State University in 1964, he did more than just enrolled in a university hundreds of miles from his native Fayetteville, N.C.: he was part of a groundbreaking movement that changed college football forever.

His story, as well as his Spartan teammates and coach Duffy Daugherty, is told in Raye of Light: the first book to fully explain Duffy Daugherty’s Underground Railroad and its impact on college football. History has not accorded Daugherty, Raye, and the Spartans proper credit for their roles in the integration of college football. Too many view Daugherty as recruiting a couple of All-American players from the South, winning a bunch of games with his 1965-66 teams and then having it all come to an end.

The tipping point was Michigan State coach Duffy Daugherty’s Underground Railroad teams with the tracks laid by Black southern high school coaches. When Michigan State and Notre Dame played in the 1966 Game of the Century, a record TV audience tuned in and saw in Black and White the new standards Daugherty’s Spartans set with 20 Black players and 11 Black starters compared to Notre Dame’s one Black player on the roster. The Spartans’ pushed open wider doors of integrated programs. USC’s 1967 national championship with seven Black players grew to 23 by the Trojans’ next national title in 1972. In the South, schools began to lead the way. Maryland integrated the ACC in 1963. In the Southwest Conference, SMU recruited Jerry LeVias in 1965. In the SEC, Kentucky, Tennessee, Florida, Auburn and Mississippi State prodded Alabama iconic coach Bear Bryant into finally recruiting Black athletes. Bryant was among the second half of SEC schools integrating despite a cottage industry erroneously touting him as a leader.

Award-winning sportswriter and the author of “Raye of Light”. Tom spent the bulk of his career in San Diego writing for the San Diego Union-Tribune. He has covered NCAA Tournaments, Super Bowls, Rose Bowls, the NBA Finals and the World Series in a career that included helping launch the success of the innovative Voice of San Diego as an on-line newspaper. He contributes to the Detroit Free Press and Raleigh News & Observer and other newspapers. He covers the ACC and Duke for the Wilson Times in addition to writing on the ACC/Duke along with Army, Navy and Air Force football for All-Sports Discussion.com. He’s also written for NFL.com, Chargers.com, MLB.com, Rivals.com and the National Football Foundation’s Football Matters.

He won multiple first-place awards from the San Diego Press Club and first place from the Copley News Service Ring of Truth Awards. The National Football Foundation/San Diego Chapter presented him its Distinguished American Award in 2003. USA Track and Field’s San Diego Chapter presented its President’s Award in 2000.
The book Raye of Light: Jimmy Raye, Duffy Daugherty, the integration of college football and the 1965-66 Michigan State Spartans explains Duffy Daugherty’s pioneering role and debunks myths that steered recognition away from him to Bear Bryant.

To read more articles about this journey – take a look at Shanny’s Picks.