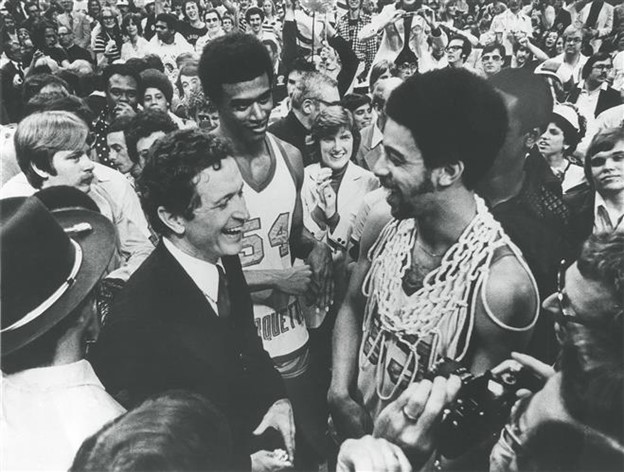 The basketball gods can turn quickly, even on a star athlete described as a “gentle giant.” March Madness is in full swing, making this a good time reflect on Marquette center Jerome Whitehead’s story.

From one NCAA tournament to another, he went from a hero, justly, to a goat (lower case), unfairly.

Whitehead emerged a Final Four hero in the 1977 NCAA tournament, scoring a buzzer-beating basket in the semifinals to beat UNC-Charlotte at The Omni in Atlanta. In a sequence involving three future NBA players, All-American guard Butch Lee threw a length of the court pass from under the basket, Whitehead wrested the ball from Charlotte’s Cedric Maxwell, he turned and scored for a 51-49 victory. Whitehead finished with 21 points and 16 rebounds.

A year later, though, the 6-foot-10, 220-pound center exited the 1978 NCAA tournament unfairly cast a villain.

The game’s momentum swung with Whitehead’s ejection, and No. 8-ranked Marquette suffered an 84-81 overtime upset loss to No. 18 Miami (Ohio). It was the first time a defending national champion fell in the opening round since the tournament had expanded to 32 teams in 1975.

Referee Pete Pavia whistled Whitehead for swinging his elbows and connecting with Miami point guard John Shoemaker, the two-sport athlete due to report the next day to the Los Angeles Dodgers’ spring training in Vero Beach, Florida.

Marquette coach Hank Raymonds, in his first year sliding over on the bench following McGuire’s retirement, objected vociferously. He contended it wasn’t intentional and thus not worthy of an ejection. Clearing space with elbows was a tactic given more leeway in a rougher basketball style played in the 1970s than now. A good comparison is baseball brushback pitches then and now.

“Jerome was the furthest thing from a dirty player,” said Jim Boylan, then a Marquette senior guard who went on to coach 32 years in college and the NBA. “He was one of the nicest persons you’d want to meet in your life. He was a gentle giant. For him to be vilified was an unjust classification.”

Controversial calls happen in sports, but Raymonds protested so long and hard, he was whistled with his first technical of the year. In the post-game press conference, Raymonds seemed to hint at a racial overtone.

I was there as a wide-eyed college kid for my first NCAA tournament experience working as sports editor of Michigan State’s student newspaper, The State News. Michigan State, with Magic Johnson, beat Providence in the second game. Mike Klocke, my State News colleague, and I soaked up the experience, taking in the Miami-Marquette game and press conference as a bonus.

I have never seen a coach so passionately feel the need to defend his player’s character. Long-time national journalist Terence Moore, then the senior sports editor of Miami’s paper, The Miami Student, told me recently his recollection of Raymonds’ reaction was similar to mine.

“There was no doubt about it,” Moore said.

This was long before teams played all of or the majority of their games on TV. Players these days have an identity, good or bad, from regular television appearances and ESPN highlights repeated on a loop. Also, this was long before sports-talk radio/TV shows that debated issues, shaped images or attempted to correct misinterpretations.

In the 1970s, fans were left with a snapshot of Whitehead. Most remember Marquette-Charlotte. Too many, though, remembered Miami-Marquette.

A couple months after the Miami-Marquette game, Shoemaker, having resumed his minor league baseball career, played a game for the Dodgers’ Class A affiliate Lodi against Salinas in the California League.

The Salinas public address announcer was the minor-league chatty type, not above offering some commentary. When the game began, he said over the loudspeakers, “Attention, John Shoemaker. Jerome Whitehead wants to meet you in the parking lot.”

That was how too many people remembered Whitehead.

When Whitehead died at age 56, he should have been remembered only for his 1977 heroics and an 11-year NBA career. He was found dead at his home in El Cajon, California, on Dec, 20, 2012 from gastronomical hemorrhaging.

I had crossed paths with Whitehead in the early 1980s. He enjoyed some of his best NBA seasons playing for the San Diego Clippers, and I was a kid reporter for a San Diego suburban newspaper, my first job out of college, that was later a casualty in the newspaper industry decline. With Bill Walton sidelined in the 1982-83 season, Whitehead started 63 games and averaged 13.8 points and 9.2 rebounds.

What would that pay in today’s NBA market?

I kept thinking back to Raymonds 1978 post-game hint at the elephant in the room: A Black player was more easily whistled as a dirty player than a white player. I’ve long regretted I failed at the task of a writing a “the real Jerome Whitehead story” in his Clippers days.

At the time, I needed more maturity as a writer. Also, I worked for a sports editor incapable of providing mentor guidance. Later, upon reading journalism memoirs, I understood what I missed out on. Since then, when asked, I’ve always given that advice to young writers — find a mentor.

This is an effort to close an uncompleted circle, and it’s a bit cathartic. Athletes have losses that haunt them. Writers have stories they missed, a loss, stay with them.

It started unintentionally while tracking down Shoemaker. I wanted to interview him for a book project I’m exploring on multi-sport athletes of yesteryear compared today’s specialization and repetitive motion injuries. This is Shoemaker’s 40th year of guiding Dodgers minor-league prospects – first as a coach, longer as a manager – and 44th with the franchise.

Naturally, our conversation drifted to the Miami-Marquette game. Later I talked with Moore and Boylan. Rehashing the game, nobody needed a video replay to jog their memory of the pivotal sequence of events.

“I had gotten the steal,” Shoemaker said. “I don’t know if you could classify it as a breakaway, but somebody (Boylan) was on my shoulder. I put up a shot and they pinned it or swatted it up on the backboard. The rest of the team came down, and Jerome got the rebound. One of our guys came over his back and probably fouled him, but they didn’t call it. I was behind Whitehead because I had just gone in for the shot.

“He’s out here doing all this stuff (demonstrates waving elbows with the ball), and I came in to try and to get a steal. You see guys try to clear people off and they never hit anybody. Well, just as he was coming that way, I was moving in. It wasn’t the point of the elbow or I would have been in bad shape. It was more the meat of the forearm. I went in and went down. I wasn’t knocked out, but I was dazed a little bit.”

Miami hit 3-of-4 free throws for Whitehead’s foul and Raymond’s technical. Miami retained possession and scored on the inbounds play to halve the 10-point deficit. Shoemaker hit two long shots that might have been three-pointers in today’s game on his way to finishing with 20 points and six assists.

Was Whitehead’s foul a dirty play?

Shoemaker called it a “basketball play.”

Boylan judged it a “a natural move”

In 1978, the game quickly moved on without the referees checking the monitor. Those reviews are now routine, growing into a monster that too often interrupts a game’s flow.

Boylan has added perspective from his coaching career. He played professionally overseas before starting his coaching career as a Michigan State assistant under Jud Heathcote and alongside a young Tom Izzo. He was later a head coach at New Hampshire and a long-time NBA assistant, including interim head coach of the Chicago Bulls (2007-08) and Milwaukee Bucks (2013).

In other words, he’s been around the game long to enough to know reviews can help and hurt the game.

“There is so much scrutiny now with the amount of the media and way games are analyzed – actually over analyzed,” Boylan said. “Now you have everybody watching15 different angles of a play. It’s across the board in sports. With technology comes a greater viewing for the fans. But at the same time, I think it takes way some of the naturalness s of the game.

“We’re microscopically refereeing the game. Sometimes, it can be frustrating. I find to it to be too much stoppage and going to the video. The game stopes. We analyze. Was it 6.8 seconds, 6.4 or 6.5 seconds? I understand it might make a difference. I understand that, but the flow of the game gets interrupted.

“But that’s the way game is today. The players learn to adjust, the coaches adjust, and the fans adjust. Things that happened 50 years ago no longer happen the same way. If you want to call it that progress, that’s progress.”

Was the ref’s whistle racial?

In those days, a coach or player stood at a lectern with a microphone. They weren’t comfortably seated at a table on a dais with a water supplied in a cup with an NCAA logo. Raymonds wasn’t looking for a seat or an early exit; he wanted to discuss Pavia’s whistle on Whitehead.

“My philosophy on that is when it comes to race, those type of things are done subconsciously and consciously,” Moore said. “Subconsciously, there could have been something there. People have biases.”

Americans are better enlightened about racial biases and stereotypes – or, at least more are willing to consider it. Look no further than veteran Creighton basketball coach Greg McDermott. He has remained in the news for using “plantation” as a metaphor to criticize his players after a Feb. 27 defeat. The school suspended him on March 4 for four days.

Would McDermott have been disciplined in 1978? Probably not. Would it have become a national story with legs until Creighton suspended McDermott? Unlikely.

Duke assistant coach Nolan Smith had criticized McDermott on Twitter prior to the suspension, asking about accountability.

Blue Devils head coach Mike Krzyzewski was already scheduled to meet with the media on March 4 in a Zoom call to discuss Duke’s upcoming game with North Carolina. He also was asked a question about McDermott.

“I think it’s up to their administration to hold people accountable, not just say something,” said Krzyzewski, who added, “Obviously the remarks are not appropriate. No one would say it was appropriate.”

Discussion and accountability – that’s the difference between the elephant in the room in 1978 and now.

Martin Luther King often said, “The arc of the moral universe is long, but it bends toward justice.”

It’s a good quote to remember when reflecting on progress we’ve made. America has shown itself more enlightened since the death of George Floyd in May. He wasn’t the first African-American killed at the hands of police, but his haunting death was caught on video. It triggered a tripwire that previously had been stepped over.

Basketball referees reviewing a monitor might have vindicated Whitehead without a snap judgment, possibly biased, hanging over the ejection.

We’ve come a long way since Jerome Whitehead was mischaracterized and buried with a label. We still have a long way to go before another veteran coach yells at his team without recognizing the insult of shouting a plantation metaphor — consciously or subconsciously.