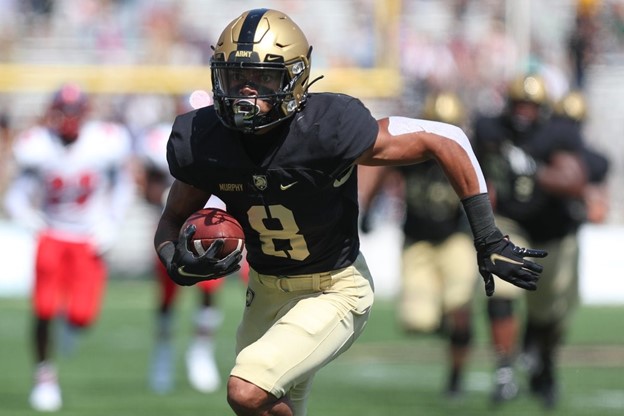 West Point turned out to be a popular destination this past year for NFL scouts. They graded senior outside linebacker Andre Carter, a third-team All-American pick last season rated as a potential 2023 first-round draft pick.

That’s typical. Scouts travel to all destinations in search of talent.

But there also were surprise visits to West Point this year representing the corporate NFL goliath. An NFL Films crew was on campus.

They produced a documentary on Army senior slotback Braheam Murphy. His is an inspiring story of his rise from basically homelessness to being on the cusp of graduation as a U.S. Army officer. The feature aired earlier this month on the NFL Network and Fox.

“I watched it,” said Army linebacker Spencer Jones, a junior from Austin, Texas. “Braheam has talked about his story in fall camp or team meetings. All of us know his story. We’re pretty moved by it. He’s a great guy and it was a good to see a special on him.

Murphy scored on a 75-yard run that gave Army a 20-17 lead with 8:20 left in the third quarter. Army needed a lift from him with slotbacks Tyrell Robinson and Ay’Juan Marshall injured. Murphy finished with a team-leading seven carries for 124 yards.

For the year, he has 40 carries for 224 yards and has caught four passes for 149 yards and one touchdown. The score was a 73-yarder against Coastal Carolina. He also contributes on kickoff and punt returns. And, of course, in the West Point triple option, blocking is in some respects more important to earning playing time as carrying the ball.

Murphy’s story, though, is inspiring without the football success.

His mother died when he was 5 years old. His father struggled raising four kids on his own, one of them handicapped. Braheam bounced between relatives. He was essentially homeless at times. He loved football but upon arrival as a freshman at Charlotte’s Harding University High in 2014, he was academically ineligible.

That’s enough adversity to seem like a lifetime ago, but in the big picture Murphy’s life story has seemingly flipped overnight.

He regained eligibility with the guidance of Harding coach Sam Greiner. He led the Rams, previously a perennial loser, to a 2017 N.C. High School Athletic Association 4A state title as a senior.

Although Murphy was ineligible, Greiner noticed in physical education classes other students were drawn to Murphy’s leadership. He took an interest in helping Murphy gain a foundation. He invited him home to dinner with his wife, Connie, and their two young children, who at the time were 2- and 3-year-old girls, Charli and Journi.

They noticed how much the 110-pounder ate. Eventually, they invited Murphy to live with them. As Murphy’s athletic career developed, Greiner steered him his college scholarship opportunities to consider West Point. He felt Murphy provided a future beyond four yearfs of football. Murphy spent a year at the Army prep school to improve his academics before arriving at West Point as a freshman in 2019.

The demanding and widespread schedules of Army’s football players made it difficult to call a team meeting to watch the film together, but Army defensive coordinator Nate Woody says it’s a film the coaches and players have managed to see on their own.

“Braheam is a story of how he has come across as a winner not just on the football field but in life,” Woody said. “It’s a tremendously inspiring story. Every day you always get 100 percent from him. It’s great to see people can recognize from NFL Films what we see every day from Braheam.”

— Tom Shanahan earned first place from the Football Writers Association of America for Enterprise Story. He is the author of Raye of Light, a book on Michigan State’s leading role in college football integration under Duffy Daugherty in the 1960s.

Duke dressing up Cameron without the Crazies; Spartans won’t recognize it during pandemic visit