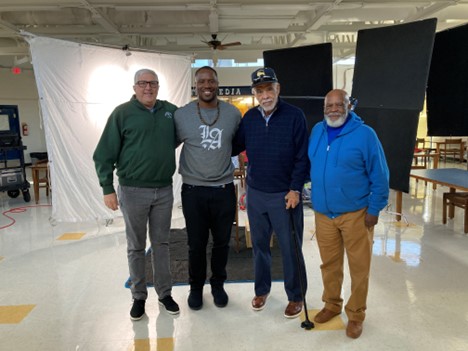 I invite you to visit my website homepage, TomShanahan.Report

I enjoyed spending the day, Tuesday, November 22, at E.E. Smith High in Fayetteville, N.C., at the invitation of NFL 360 director/producer Osahon Tongo.

He invited me down as the author of “Raye of Light” for interviews on a documentary on Jimmy Raye, Michigan’s pioneering Black quarterback and pioneering Black coach in both college and the NFL. E.E. Smith is Raye’s alma mater.

NFL 360 is a division of the National Football League and the NFL Network.

Edgar Farmer is Jimmy Raye’s brother-in-law. He also played at E.E. Smith and later at Johnson C. Smith University, a Historically Black College and University in Charlotte, N.C. He was the older brother of Raye’s late wife, Edwina.

Donald Raye was Jimmy’s younger brother who succeeded him as the quarterback at E.E. Smith when Jimmy left for Michigan State.

Prior to Tongo’s position at NFL 360, he worked at the Black Entertainment Network and has produced short films. He played football at Georgia Tech.

Duffy’s 1972 QB option and last hurrah with upset of No. 5 Ohio State