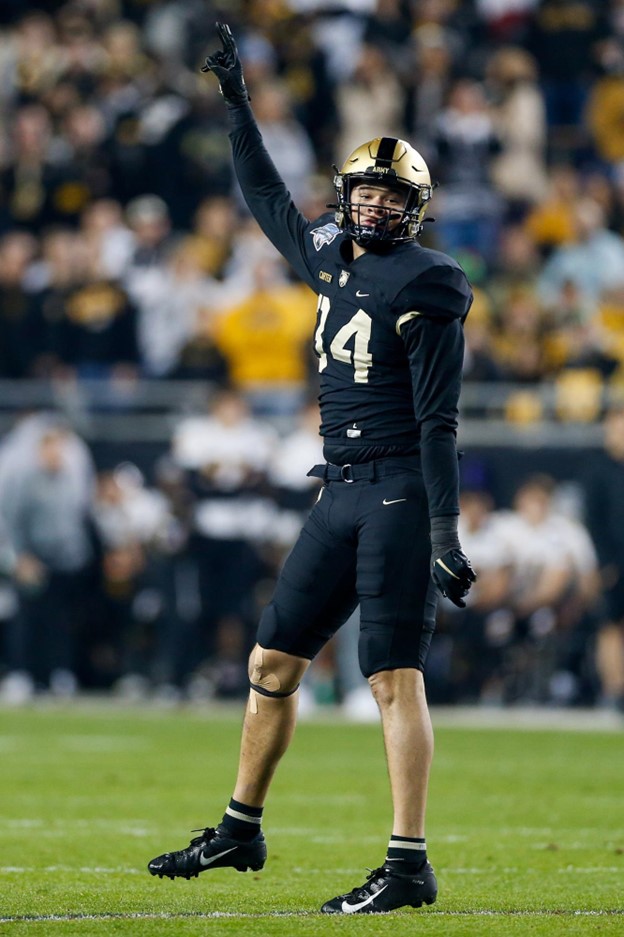 Nobody waves the flag better than the NFL, so imagine the league’s draft day stage if Army West Point All-American linebacker Andre Carter’s name is called as a first-round pick.

The cameras find Carter, who has been projected among the top 50 picks and as high as 22nd in mock drafts. The 6-foot-7, 260-pounder climbs the stage’s steps in his brilliant West Point dress uniform. Yankee Doodle music blares. Confetti falls.

But there were shortsighted people higher up than NFL commissioner Roger Goodell and the league’s 32 owners – yes, they exist – who nearly spoiled the show. A bill introduced by Wisconsin Republican Congressman Mike Gallagher revoked a policy in place since 2019 that has allowed Army, Navy and Air Force players to defer their active-duty commitment to pursue a pro career.

In other words, Carter was having the rug pulled out from under him.

Andre Carter was lightly recruited as 4-star player’s backup. Only one on way to NFL now.

Once Carter’s story hit the media, the bill was revised. Gallagher and his ilk must have realized how unpatriotic they’d look denying an All-American athlete. They reworded bill, revealing on Tuesday a grandfather exception for the next couple years.

It helps to have Congress on your side over patriotic issues, unless you’re Colin Kapernick equating patriotism with free speech. In his case, the NFL blackballed him while President Trump applauded and Congress remained silent.

For us to better understand the ramifications of Carter’s case, let’s go back to a simpler time.

In the early 1960s, the college and pro football worlds were yet to be altered by the divisive Vietnam War changing attitudes about military service and the NFL and AFL bidding wars escalating salaries to life-changing money.

Before the paradigm shift, Army, Navy and Air Force were able to recruit against the nation’s top civilian college program. In the fall of 1961, one such star quarterback was Roger Staubach. He chose Navy. Another talented quarterback was Rollie Stichweh. He picked Army.

Staubach and Stichweh were rivals and friends who led their teams in epic 1963 and 1964 Army-Navy Games. Navy won 21-15 in a 1963 game credited with helping the nation heal from President John F. Kennedy’s assassination two weeks earlier. A year later Army avenged the loss with an 11-8 victory.

Upon graduation, Staubach and Stichweh fulfilled their military commitments as lieutenants, including time in Vietnam. But Navy granted Staubach latitude, allowing him to attend training camps with the Cowboys before returning to duty. Stichweh didn’t enjoy the same privilege, even though the Oakland Raiders and New York Giants wanted to sign him.

You know the rest of the story.

Stichweh, serving in the jungle highlands along the Ho Chi Minh Trail, was twice decorated for valor during the 1968 Tet Offensive. He finished his military career as a captain and then entered the corporate world.

In 2017, I wrote a story for the National Football Foundation about Stichweh and his devotion to West Point. I asked him if he was bitter he was denied an NFL opportunity. As an Army officer, retired or not, he didn’t go so far to criticize his superiors, but we can read between the lines.

“I give Navy credit – the Navy really supported Roger,” Stichweh said. “He was able to go training camp with the Dallas Cowboys. The Navy has gotten a good return on its investment. He’s been a Navy ambassador for 50 years.”

Nobody wishes Stichweh gained an opportunity more than Staubach. When Staubach learned Stichweh was to be enshrined in the Army West Point Sports Hall of Fame in 2012, he altered his plans to attend. He also spoke, telling the audience:

“I think Rollie Stichweh, besides being a terrific person, was one of the best football players and athletes I ever saw – without a doubt he could have been an outstanding pro.”

In other words, Captain America says Stichweh would have been a great Army ambassador.

And consider this: Once the NFL gets a taste of waving the flag over Carter as a draft pick, it will hunger for more opportunities.