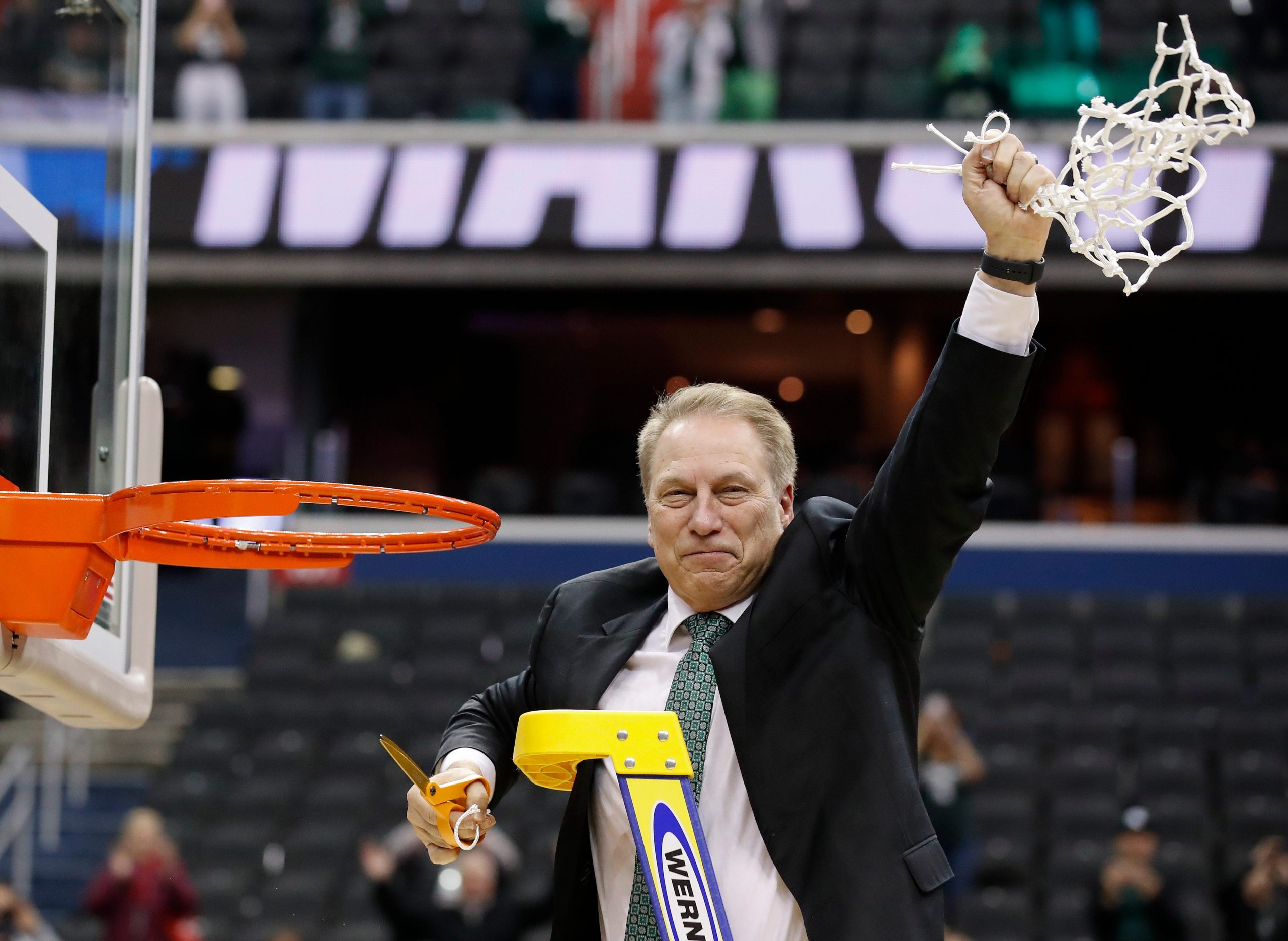 PHOTO: Tom Izzo has cut down many championship nets, but it’s not a number as great as the total of Big Ten coaches he has outlasted.

That’s how many Big Ten basketball coaches have come and gone since Izzo took over Michigan State’s program 26 years ago, the 1995-96 season.

The total surprised Boylan, even though he understands the revolving door nature of coaching. He moved on from East Lansing as the head coach at New Hampshire prior to 26 years as an NBA assistant, including earning an NBA championship ring with the Cleveland Cavaliers (2016) and two interim head coach stints in Chicago and Milwaukee.

“The first thing it says about Tom is he’s old,” said Boylan, who, like Izzo, is 66. “That’s No. 1, and No. 2 it’s an acknowledgement of his coaching skills and his people skills.”

The Big Ten’s revolving coaching door has settled after spinning out three more the past season: Penn State’s Patrick Chambers at the start and Minnesota’s Richard Pitino and Indiana’s Archie Miller at the end. Chambers resigned after an internal investigation found “inappropriate conduct.” Pitino and Miller were fired for not winning enough games.

“I never thought it would be a great move for him to go to the NBA.”

In other words, Izzo’s consistency and success have spared Spartan Nation a lot of basketball disappointment, even misery.

How did he do it?

“Tom has an honest and sincere presence,” Boylan said. “So, when you meet him, right away you like him. When he’s recruiting, you feel like he’s on the up and up, he’s telling a parent the real deal about what their son can do in his program. You needed honesty and integrity at a high level to maintain a job at one school for a long time.”

Izzo has taken the Spartans to 23 straight NCAA bids (24 if the canceled 2020 tournament is counted) along with titles represented by the nets he has cut down. His success eventually drew NBA offers, but Izzo has resisted the temptress.

“I never thought it would be a great move for him to go to the NBA,” Boylan said.

Izzo turned down the Atlanta Hawks prior to the 2000-01 season and the Cavaliers before 2010-11. He has said he received other offers that didn’t become public. Boylan explained college coaches that jump to the NBA mistakenly believe they’ll enjoy the luxury of on only having to draw up X’s and O’s.

“College coaches think, ‘Oh, the NBA is strictly coaching.’ That’s why you see guys jump and most of the time it ends in failure. In reality, in the NBA you have to put up with a lot of crap. It’s a players’ league. You have to navigate relationships but still be demanding. It’s a tough balancing act. In college, you have the final say. In the NBA, you don’t.”

When Izzo turned down Atlanta, the Hawks gave the job to Lon Kruger, who was then the head coach at Illinois. Kruger was fired three years later. Kruger returned to the college ranks at UNLV for seven seasons and retired last month after 10 more years at Oklahoma.

Kruger is one of only three coaches to take five teams to an NCAA tournament, but with NBA failure interrupting his college stops, how is he remembered? Is he from Oklahoma, UNLV, Illinois, Florida or Kansas State? And that’s not counting his first job, Pan American. He’s not in the Basketball Hall of Fame. Izzo was enshrined 2016.

Izzo, who has been at Michigan State 38 seasons overall dating to his 12 as an a Heathcote assistant, has advanced from Yooper to whippersnapper to wunderkind to elder statesman.

The 53 coaches Izzo has outlasted:

Final Four/national title: 2/1 (both as an ACC member).

Michigan State also has been spared ugly scandals that have stained six programs with a fired coach.

From Clem Haskins to Bo Ryan, seven coaches have taken a Big Ten school to a Final Four during the Izzo era. None are still coaching at their same school.

— Thad Matta Ohio State, 2007 and 2012 FFs: mutually agreed with school to resign for health reasons while program declined; out of coaching.

Looking back at Coach K and the early lesson