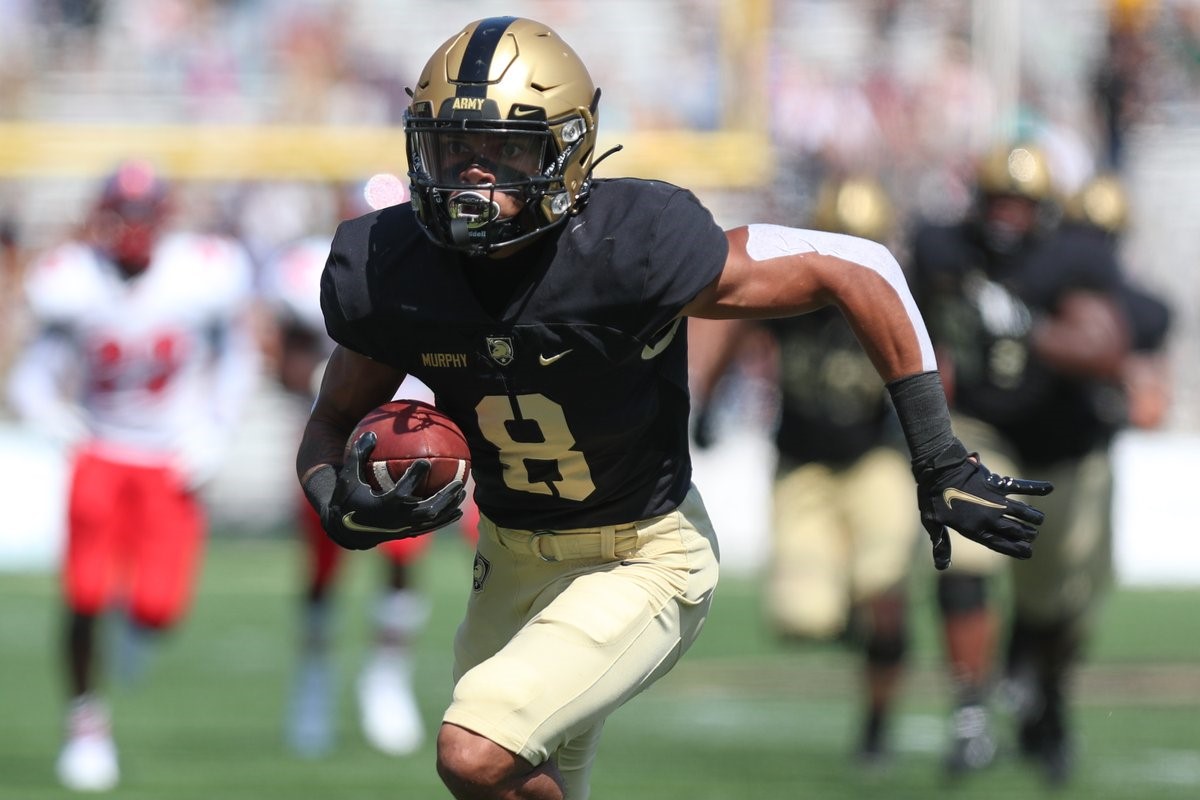 PHOTO: Braheam Murphy is in the clear on his 40-yard TD run with Western Kentucky defenders trailing him.

“The West Point Story” was a late 1950s TV series that aired on both CBS and ABC as a drama. Episodes included unknown actors such as Clint Eastwood, Chuck Connors and Leonard Nimoy on their way to iconic stardom.

The plots were written from actual events, with the names changed. The Department of Defense cooperated, but it’s necessary to keep in mind the time period. The stories were vanilla, reflecting only white America.

A new “West Point” TV series in the 21st century would better reflect America. Army slotback Braheam Murphy’s path to West Point would be a gripping tale. No need to send the script to rewrite to embellish the story. Certainly, it’s a better plot than the contrived reality shows these days that dumb down network programming.

Murphy’s mother died when he was 5 years old. His father struggled raising his kids on his own. Braheam bounced between relatives. He was homeless at times. He loved football but upon arrival as a high school freshman at Charlotte (N.C.) Harding University in 2014, he was academically ineligible.

That’s enough adversity to seem like a lifetime ago, but in the big picture Murphy’s life story has seemingly flipped overnight.

He regained eligibility with the guidance of Harding coach Sam Greiner. He led the Rams, previously a perennial loser, to a 2017 N.C. High School Athletic Association 4A state title as a senior. The inspiring story gained the attention of CNN for a feature in 2017.

His play also caught Army’s interest, but he needed to spend a year at the U.S. Military Academy Prep School to improve his academics and then gain West Point admission. Not all such recruits make it through the prep school or even their plebe year upon admission, but Murphy has defied the odds.

“Army took a chance on me,” said Murphy after practice this week. “I was committed to Army once they offered me my junior year. From there on, I knew I had to lock in, to tame my lifestyle to be cadet and be a good leader. All of that comes before football.”

Murphy, a 5-foot-10, 185-pound junior, has scored two touchdowns on receptions in Army’s 2-0 start. He caught a 32-yarder from Jemel Jones at Georgia State and a 40-yarder from Christian Anderson against Western Kentucky last week at Michie Stadium.

If anybody deserved to celebrate a college touchdown with a dance in the end zone sans a penalty flag, it was Murphy. But that wouldn’t befit a West Point cadet. Nor the teamwork the Black Knights pride themselves on to overachieve.

“It’s not me,” Murphy said of his touchdowns. “It’s the guys in the slotbacks room. We prepare every day. We go by what coach Davis (Brent, the offensive coordinator) and coach Monken (Jeff, the head coach) say. It happens at practice. It doesn’t happen in the games. We practice hard every day and it translates to the field.”

Spoken like a future officer – or a unknown Clint Eastwood in a 21st century episode of “The West Point Story.”

“Braheam is so special,” said Greiner, who is now the head coach at West Charlotte. “He is the greatest leader I’ve seen. I had some great athletes that played with him — and he wasn’t very big then — but they all looked up to Braheam. He’s a born leader, the type of guy who could become a General.”

Murphy came to Greiner’s attention in a morning physical education class his freshman year. Greiner noted Murphy was often late for school as he learned the backstory. Although Murphy wasn’t eligible to play, Greiner also saw how smoothly Murphy interacted with his classmates.

So, one night he invited Murphy home for dinner. He and his wife Connie saw how much the 110-pounder ate. Murphy was only a sophomore, so he wasn’t yet a star that has been the usual key element when hearing stories about coaches giving kids a second chance. But he and his wife were moved by Murphy’s struggles and his potential. They invited him to move in, even though they were young parents then with 2- and a 3-year-old girls, Charli and Journi.

“My wife made the final say so,” Greiner said. “I saw Braheam going through difficult times. I saw how passionate he was and how he wanted to play football. I saw how it broke him up inside not being able to play. The more I learned about his situation, I realized this guy needs a little help.”

Murphy played his senior year as a 160-pounder, and his size left him under the recruiting radar of Division I football coaches. But Greiner understood the military academies develop overachievers.

He contacted Jay Bateman, who is now North Carolina’s defensive coordinator but at the time was Army’s DC recruiting the state of North Carolina. Bateman offered a visit. Murphy loved West Point and committed, undeterred by the 180-degree turn to a military lifestyle that faced him.

As Murphy’s playing star rose during his senior year at Harding, Group of Five and Football Championship Subdivision recruiters grew interested. Greiner, though, didn’t let them talk to Murphy.

“I told them he was committed to Army,” Greiner said. “I didn’t want them filling his head with stories about how much easier it would be. He’s like a son to me.”

Murphy’s first adjustment to a military lifestyle was to sacrifice himself for the good of the team. Not long after arrival at the Army prep school, he was converted from quarterback to slotback.

That’s not as easy as it sounds. He went from being the voice of the huddle to one of 11. Also, the fullback and quarterback gain most of the carries in the triple-option offense. Slotbacks have a primary responsibility of blocking the linebackers and defensive backs.

His 40-yard TD reception against Western Kentucky started out disguising him as a blocker. He was lined up in the left slot and sealed a linebacker with the play behind him flowing left.

Then, he released up the left hash mark before cutting to the right to open green space.

“The safeties bit on the run and came down hard,” Murphy said. “It was a blessing Christian saw me open. We practice every day looking the ball in. The play came up for me on Saturday. Practice made it happen.”

Murphy’s score spotted Army to a 14-0 lead early in the second quarter against a Conference-USA member that had a 3-0 record against the Black Knights in recent years. The Hilltoppers’ explosive passing game eventually sparked a comeback with 21 fourth-quarter points, but the Black Knights held on for a 38-35 victory.

Murphy isn’t the first kid Army has taken a chance on and won’t be the last to change a life trajectory.

Quarterback Ahmad Bradshaw, who led Army to its first win over Navy in 13 years in 2016 and its first Commander-in-Chief’s Trophy in the Army/Navy/Air Force rivalry in 21 years in 2017, was steered to West Point out of one of the Chicago South Side’s deadliest neighborhoods by James Brown, his Gwendolyn Brooks College Prep coach.

Quarterback Kelvin Hopkins, who led Army to its third straight win over Navy and second consecutive C-i-C in 2018, was encouraged to consider Army by his Charlotte Independence coach, Joe Evans.

Slotback Kell Walker of Decatur, Georgia, said his senior year he would be the first in his family to graduate from college and “end this family curse.”

Army is seeking a 3-0 start against Connecticut (0-2) at noon Saturday at Michie Stadium. Murphy may not score, but his blocking will be important.

“He was small in high school, but West Point looked at his heart,” Greiner said. “That’s why West Point is able to play and beat teams with bigger recruits. They look for something different in their guys.”

He’s but one tale fit for an episode of “The West Point Story.”

Daly’s stories on James Bond, Duffy, Biggie, breakfast with The Bear and quotes Bryant’s apologists don’t want you to hear