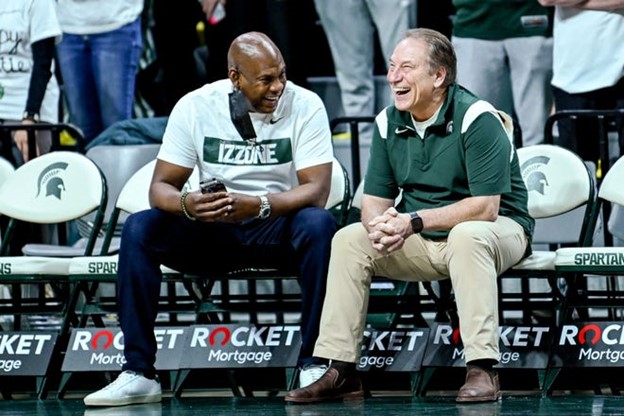 John Calipari’s comments that Kentucky is a basketball school at the expense of his school’s improving football program not surprisingly drew an angry reaction from Wildcats’ coach Mark Stoops. It’s not that Calipari’s statement isn’t true.

Kentucky has long been considered a basketball school.

The problem is Calipari uttered a smarmy, self-serving comment. He didn’t build Kentucky into a basketball school. He inherited the elite job.

Adolph Rupp took his program to six Final Fours with four NCAA titles, 1948, 1949, 1951, 1958. He retired with a then-career record of 876 wins. Successors Joe B. Hall, Rick Pitino and Tubby Smith added three more titles and seven Final Four trips. If Calipari wanted praise for building a basketball school, he should have stayed at Massachusetts. Or Memphis.

The timing of Calipari’s boasting at the expense of a campus colleague also is interesting when compared to Michigan State coach Tom Izzo signing two days earlier a five-year extension.

Earlier this century, Izzo earned the right to grandstand for elevating MSU basketball. Prior to Izzo, the Spartans claimed one NCAA title and two Final Four trips. Izzo has one NCAA title (2000) to go with eight Final Four trips spanning 1999 to 2019. He has elevated the program to a brand name. Michigan State annually plays in the Champions Classic along with blue bloods Duke, Kansas and Kentucky, thanks to Izzo.

Izzo is a football player at heart from his Iron Mountain High days with former NFL coach Steve Mariucci, his close friend and high school teammate. They were roommates at Northern Michigan when Mariucci convinced Izzo to give up his two-sport college plans to focus on basketball. Izzo enjoys attending football games and has had close relationships with Saban and Dantonio and now with Tucker.

“Supporting the football team was an easy decision,” Izzo said in a 2011 news release. “Coach (Mark) Dantonio is a man of character, building a championship program. But what makes football special is that it truly benefits everyone across the university. Spearheaded by football’s success, there is great momentum throughout all programs.”

Izzo, in fact, continues to deflect praise over his career record compared to his mentor, Jud Heathcote, who hired Izzo in 1983 as a graduate assistant. That was reflected in Izzo’s football donation quotes from 2011.

“Jud Heathcote taught me long ago that the only good deal was one that benefits both parties, and that perfectly describes my relationship with Michigan State University,” Izzo said. “My wife Lupe and I, along with our children Raquel and Steven, have dedicated our lives to this university, because we believe in intercollegiate athletics and the positive role it plays in so many lives.”

Don’t expect a Kentucky basketball player from the Calipari years to make a donation with money designated for the John Calipari Football Building.

Tom Izzo is content to have added a basketball reputation to Michigan State’s football reputation. There’s a lot of Duffy Daugherty in Tom Izzo. Daugherty turned down lucrative deals from Texas A&M in 1958 and Notre Dame in 1964 to remain 19 years in East Lansing. It was his only job as a head coach.

Izzo is entering his 28th in his only job as a head coach.

Not much changed in NFL for Bieniemy