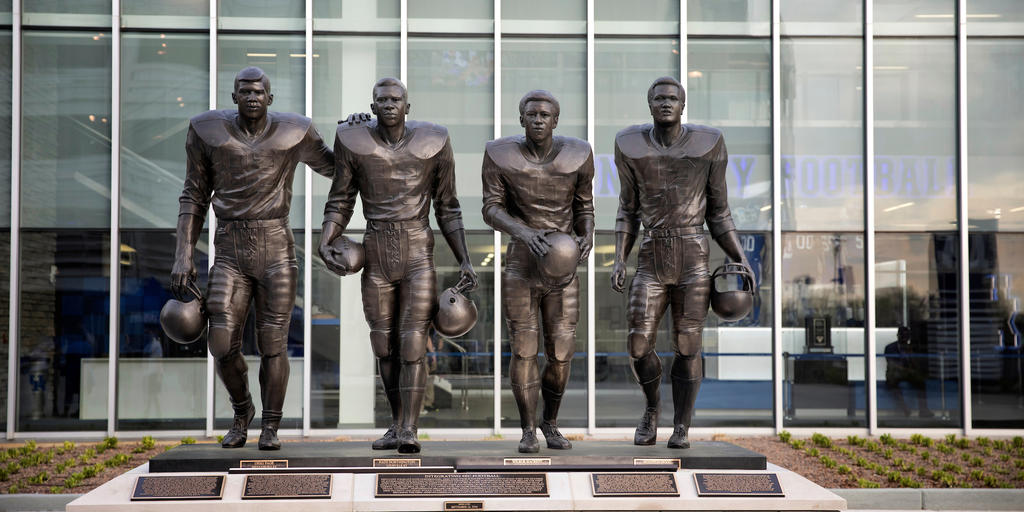 There’s one more storyline to consider regarding John Calipari’s self-serving comments that Kentucky is a basketball school. And I’m here to explain it.

“This program wasn’t born on third base,” said Stoops, correctly noting the contrast of Calipari inheriting a blue blood program, while Stoops has steadfastly lifted Kentucky football from doormat to national rankings.

But the news cycle has moved on. Stoops should have made a more lasting statement. He should have offered to teach Calipari a history lesson on Kentucky athletics.

Kentucky most certainly is a basketball school, but the school’s football program under Charlie Bradshaw owns a sacred place in social progress history — particularly in the Jim Crow South. Kentucky basketball, under legendary coach Adolph Rupp, resides in place of disgrace.

Rupp’s all-white program has been infamously tied – and rightly so — to the 1966 NCAA championship game. Kentucky lost to Texas Western (now UTEP), a team led by five Black starters.

Here’s a fact overlooked in Kentucky history: That NCAA title game was played on March 19, 1966. By then, Bradshaw had already led Southeastern Conference desegregation. Nate Northington and Greg Page, Kentucky’s first two Black recruits, were recruited as seniors in the fall of 1965. They arrived on campus in the fall of 1966.

Stoops could have explained all this history while inviting Calipari to stroll down from Rupp Arena (named for a coach history has judged a racist) to Kroger Stadium and the football complex. Outside proudly stand four bronze statues of Northington, Page, Hackett and Hogg.

And, Cal, if you’re thinking basketball should duplicate the great idea, uh, not so fast. You’re better off not dredging up Kentucky’s basketball integration history, especially since some of those attitudes still linger with your fans. They were upset when your Black players took a knee during the national anthem at a 2021 game. Shut up and dribble, they said. Your most famous fan, Ashley Judd, was distressed enough in 2017 to take to facebook, stating Kentucky fans had harassed her for opposing the policies of Donald Trump.

Rupp finally gave up resisting integration when he signed his first Black player in 1969, Tom Payne. There will never be Payne statue outside Rupp Arena. Payne was in and out of prison from 1972 to 2019 on rape charges and parole violations.

In addition to Calipari not appreciating Kentucky’s football history, my guess is he’s among the millions of fans who believe Alabama coach Bear Bryant was an integration crusader and USC a model integrated program. All such fans have been duped by myths and fiction surrounding the 1970 USC-Alabama game. Those myths were crafted in the 1990s and spread to this day with the cooperation of national media outlets that tend to follow each other.

Many of those media members, similar to Alabama’s fans, want to believe Bryant was John Wayne. He wasn’t. He didn’t sign a Black recruit until 1970. That was a YEAR after Rupp at Kentucky. The Alabama campus desegregated in 1963.

Bradshaw was a Kentucky player (1946-49) on Bryant’s all-white teams and an Alabama assistant (1959-61) on Alabama’s staff coaching all-white rosters. But Bradshaw, unlike Bryant, had evolved by 1966. He was a true 1960s pioneer of SEC football integration.

Sadly, though, if you asked the average fan who led SEC desegregation, too many would say, “Bear Bryant.” And if you mentioned Charlie Bradshaw to them, they’d say, “Who?”

Calipari needs to understand the difference between Kentucky football and basketball is more noble than which coach inherited a blue blood program.

The Charlotte Touchdown Club got this award right