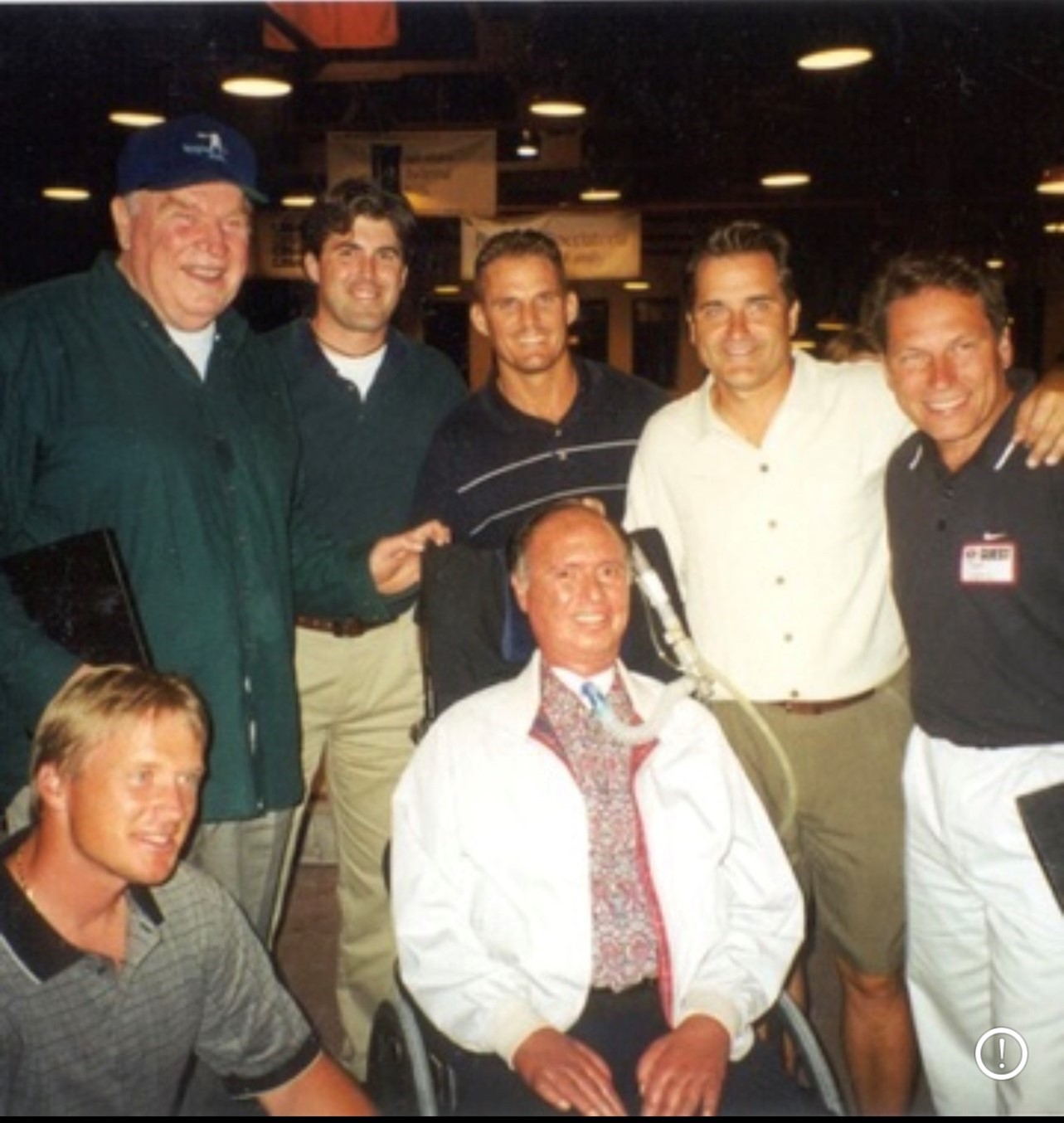 PHOTO: Charlie Wedemeyer’s athletic career spans his career at Michigan State, coaching at Los Gatos High in the Bay Area and his induction into the Polynesian Football Hall of Fame in Hawaii. He was joined in this photo around him left-to-right: NFL coaches Jon Gruden and John Madden, two family friends, former 49ers coach Steve Mariucci and Michigan State basketball coach Tom Izzo.

A high school coach’s invaluable role too often is lost in a sports world focused the attention that the College Football Playoff and the Super Bowl attracts. The immense payoffs overshadow the game’s grass roots.

But each season the San Francisco 49ers remind Bay Area fans the importance of a high school coach. They bring back to life Charlie Wedemeyer’s inspirational story of coaching the Los Gatos High football team while fighting Lou Gehrig’s disease.

Two decades ago, Steve Mariucci inaugurated the San Francisco 49ers’ annual Charlie Wedemeyer Prep Coach of the Week and Coach of the Year awards while he was the 49ers’ head coach, 1997-2002.

“What better way to honor high school coaches and to honor Charlie for his contributions to the Bay Area,” said Mariucci, who is now an NFL Network analyst. “Every one of our players in the NFL had a person who influenced them and mentored them as they were coming up.

“Hopefully parents provide influence, but sometimes it’s a particular coach or two. I know how important my high school coaches were to my development and maturity in my upbringing. My coaches, in football, basketball and track, were, outside of my dad, the most influential people I knew.”

Wedemeyer’s relentless spirit finally gave way to his body’s fight with amyotrophic lateral sclerosis at age 64 on June 3, 2010. But the franchise has remained committed to honoring coaches in Wedemeyer’s name through his death and the franchise changing head coaches. Wedemeyer’s widow Lucy presents the plaques.

But this year, in addition to the 49ers, honoring Wedemeyer includes a post-season.

His island “shaka spirit” with Hawaiian/German ancestry returns home to Hawaii for his posthumous induction into the Polynesian Football Hall of Fame on Jan. 21 in Hawaii. Lucy, daughter Carrie and son Kale (Charles in Hawaiian) are attending the enshrinement at the Polynesian Cultural Center.

“This is pure joy for our family,” Lucy said. “More people can know about someone that faced adversity and never gave up. He’s being honored beyond his success for his athletic ability. His legacy has lived on for how he carried himself and for the love he had for his players and other coaches. He had such great respect.”

Wedemeyer was a legendary high school athlete at Punahou School in Honolulu until he joined Michigan State coach Duffy Daugherty’s Hawaiian Pipeline. Wedemeyer, a sophomore backup quarterback and holder, was one of three Hawaiians on the Spartans’ 1966 national championship team along with senior kicker/punter Dick Kenney and junior fullback Bob Apisa.

Wedemeyer, upon earning his Masters degree at Central Michigan University, settled into a teaching and coaching career at Los Gatos, but he was diagnosed at age 32 with ALS in 1978 shortly after he was named the head coach at Los Gatos High. He was eventually forced to coach from a golf cart. When he lost his voice to the insidious disease with no cure, Lucy, his high school sweetheart at Punahou School in Honolulu, read his lips to relay play calls.

The first was the 1988 CBS-made-for-TV movie, “Quiet Victory: The Charlie Wedemeyer Story.” Michael Nouri played Charlie and Pam Dawber played Lucy. The second was the 1990 Public Broadcast System Emmy Award-winning documentary, “One More Season,” on his ninth final season in 1985.

Wedemeyer enters the Polynesian Hall for his coaching career, but his athletic fame in Hawaii dates to the 1960s as Hawaii’s Prep Athlete of the Decade. Wedemeyer played quarterback on the football team along with basketball and baseball at Punahou, the alma mater of President Barack Obama.

Indiana high school basketball has its Bobby Plump, the real-life Jimmy Chitwood, in the movie “Hoosiers.” Hawaii of the 1960s had its Charlie Wedemeyer, “The “God of Lightning,” – the Hawaiian translation of Kalekauwila (or Charles in English). Wedemeyer ruled like King Kamehameha on Oahu less populated than now and one without an NCAA Division football program until 1974.

“Charlie never had to pay,” said Lucy of their favorite restaurant stop.

Another restaurant, Flamingo’s on Mapunapuna Street, always set aside a banana cream pie to be available when Wedemeyer arrived after Friday night games.

The Polynesian Hall induction brings full circle one more aspect of Wedemeyer’s life. On the same night, Hawaii legend Tommy Kaulukukui will be enshrined. Wedemeyer was named to the Class of 2021, but the ceremony was postponed due to the COVID-19 pandemic and later combined with the 2022 class that includes Kaulukukui.

“Tommy Kaulukukui was a mentor to all of us who went to Michigan State,” said Bob Apisa, who was enshrined in the Polynesian Hall in 2018 as the first Samoan All-American player with the Spartans in 1965 and 1966.

Apisa is considered the godfather of Polynesian football that launched the wave of Polynesians now permeating all levels of football and spreading from coast to coast on the mainland. He was one of 11 Hawaiians Kauliukukui steered to Michigan State – 10 under head coach Duffy Daugherty, 1954 to 1972, and one under Muddy Waters, Carter Kamana, 1981-84.

Kaulukukui was a Hawaii legend as a player and coach of the Rainbows.

Daugherty struck up a friendship with Kaululukui when the Spartans played at Hawaii, in 1947. When Daugherty was promoted to head coach in 1954, he told Kaulukukui to inform him of Big Ten talent in Hawaii.

Kaulukukui stocked Michigan State’s 1966 national championship roster with three Hawaiians who faced Notre Dame in the Game of the Century, Nov. 19, 1966 at Spartan Stadium. Wedemeyer was a sophomore backup quarterback/holder; Apisa, a junior fullback; and Dick Kenney, a senior kicker/punter. A record TV audience of 33 million tuned in, including the first live broadcast of football game in Hawaii, thanks to new satellite technology.

The game ended in a controversial 10-10 tie with Notre Dame (9-0-1) and Michigan State (9-0-1) named national co-champions by the National Football Foundation, although the Associated Press, United Press International and Football Writers Association of America named the Irish national champion.

Lucy said Daugherty stayed in touch with Wedemeyer throughout his post-Michigan State days.

“Everything he did was with great determination,” Daugherty says in the 1990 PBS film. “He was the finest blocker on our team. At 5-8, 175 pounds, he would knock those big 6-4, 258-pound ends flat on their backs. He had that explosiveness. No one was too big for him to attack.”

The Polynesian Football Hall of Fame enshrinement brings it all together – Hawaii, Punahou, Michigan State, Los Gatos and a courageous fight against a disease with no cure.

Small world: My story in the Honolulu Star Advertiser