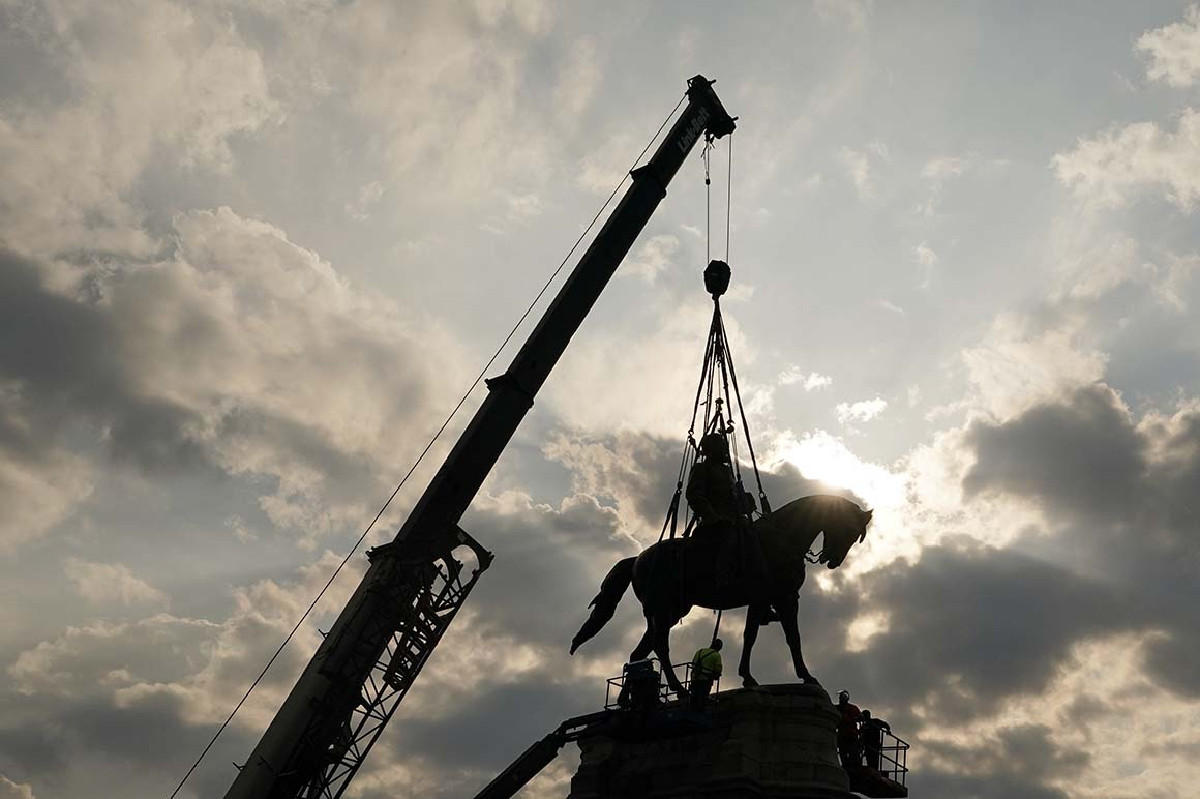 Some of those myths were crafted duplicitously. The purpose was to obfuscate Alabama coach Bear Bryant’s long history dragging his feet on integration and to embellish USC’s role in the 1970 USC-Alabama game.

By the time you finish those stories, Bryant was transformed to a crusader. The same Bear Bryant who maintained an all-white roster until the 1970s despite his campus desegregating in 1963 and the Civil Rights Acts of 1964 and 1965. And USC, which followed unwritten quotas limiting Black athletes in the 1960s to a half-dozen or so, was portrayed as a model program.

The success of those stories taking root in college football lore has swept aside the true 1960s pioneers who made it possible to play the 1970 USC-Alabama game without incident. So, where to start citing the chapters of misleading information?

Davis played football at Tennessee in the 1980s and is now a TV analyst for the NFL Network. But in 2019, Herzog & Co., which produced the series for ESPN, gave him free rein as a Fox college analyst to misrepresent the legacy of Michigan State coach Duffy Daugherty. Davis, apparently, is utterly unaware Daugherty assembled college football’s first fully integrated rosters in the 1960s.

In 1962, the Associated Press reported Michigan State’s 17 Black players was the most in major college football history. Daugherty smashed the unwritten quotas by taking the same chances on some Black players as he did with White athletes. That same 1962 season, USC won the national title with five Black players. The Trojans were selective, taking only Black players who were, in today’s vernacular, 4-star recruits, to maintain its quota limitations.

In Southern California — home Jackie Robinson, who broke the Major League Baseball color line in 1947 with the Brooklyn Dodgers, as well as Woody Strode and Kenny Washington, the first Black players in the NFL in 1946 with the Los Angeles Rams — a coach has to work at keeping his roster limited to five Black athletes.

Nevertheless, here’s how Davis cynically summed up Daugherty on film:

“But for Duffy Daugherty, it wasn’t just him trying to be Mr. Progressive and Abraham Lincoln. Duffy was about winning football games.”

SAY WHAT??!! A pioneer blazing a trail other schools failed to follow until a decade later shouldn’t be viewed so disparagingly. That should be left to someone who was late getting on the bus and deserved to have his hypocrisy exposed (read: Alabama coach Bear Bryant; USC coach John McKay).

Herzog was guilty of sloppy research by allowing Davis to say that on the air. Or maybe it was sloppy editing if Davis said it but in a different context.

— A) Daugherty recruited 44 Black players from the segregated South between 1959 and 1972 aboard his Underground Railroad.

— C) The Underground Railroad’s graduation rate was 68 percent in an era prior to athletic academic support systems essential recruiting pitches.

If that quote sounds familiar, Herzog used it in Episode 3, Integration, at the 17:39 mark. As I previously stated in Part II of this series about the Integration episode, there was no mention of Apisa’s Samoan heritage. Apisa was the first Samoan All-American player who launched the wave of Polynesian talent. Daugherty also was ahead of his peers recruiting Hawaii. Apisa is in the Michigan State Hall of Fame and the Polynesian Football Hall of Fame.

I think Herzog’s team assumed Apisa, based on his dark skin and short black hair, was another one of Daugherty’s African American recruits. I asked Bob about my suspicion, and he agreed with me. He expressed disappointment his Samoan heritage wasn’t recognized in the film.

Apisa is considered the godfather of Polynesia football, and he’s proud of Polynesian contributions to football at all levels.

Davis, though, deserves credit for singling out Michigan State’s Jimmy Raye for his pioneering role as a Black quarterback. Raye played frequently as a sophomore backup to All-America senior QB Steve Juday in the 1965 national title season, he was a starter on the 1966 national co-championship team and a second-year starter in 1967 as a senior. Raye, recruited from segregated Fayetteville, N.C., was the South’s first Black quarterback to win a national title.

“The one I really lock in on is Jimmy Raye,” Davis said. “Because Jimmy Raye played quarterback. That’s the position they told us we couldn’t play. Minnesota did it with Sandy Stephens.”

Uh, Charles. Minnesota only had five Black players. There was an unwritten quota limiting Black athletes.

At that point, Herzog’s writers and editors should have featured Raye, who also has a prominent identity as a pioneer Black college assistant coach – hired by Daugherty — and as an NFL assistant over five decades.

In the 1972, Daugherty added Raye to his staff. He had hired Don Coleman in 1968 as one of college football’s first Black assistants, but Coleman decided after one season coaching wasn’t in his blood. Daugherty replaced Coleman in 1969 with Sherman Lewis, his first Underground Railroad All-American player in 1963.

With Lewis and adding Raye in 1972, Daugherty had two Black assistants at a time other schools were hiring their first assistant of color. Lewis and Raye were two histrically positioned candidates to interview about Black coaches coming on the scene, but they don’t appear in such films due to the media and public lack of awareness. Both Lewis and Raye went onto long-time NFL careers, including as pioneer Black offensive coordinators.

On June 30, Raye was among five long-time assistant coaches the NFL honored with its “Awards of Excellence” at a ceremony at the Pro Football Hall of Fame in Canton, Ohio. The master of ceremonies was Pro Football Hall-of-Fame quarterback Dan Fouts. But we never hear from Raye. Nor any other Michigan State African American player, including two College Football Hall of Famers from the 1965 and 1966 teams who are still with us, Gene Washington and Clinton Jones (Bubba Smith and George Webster have passed away).

Another pioneering Black assistant coach overlooked was Houston’s Elmer Redd, who was hired in 1970 by Bill Yeoman, a former Michigan State assistant under Daugherty. Redd was one of the most successful Black high school coaches in Texas during segregation prior to Yeoman bringing him onboard for 17 seasons. Houston named its training facility for him, Elmer Redd Sports Performance Center.

But Herzog chose to highlight Bryant hiring John Mitchell as his first Black assistant coach in 1973. Mitchell had been a Crimson Tide senior in 1972. Herzog focusing on Bryant hiring Mitchell sticks to the convenient script of portraying Bryant (falsely) as a crusader. Focusing on Mitchell is either sloppy research or purposedly positioned to obfuscate Bryant’s poor Civil Rights record.

I learned from writing “Raye of Light” it’s not enough to do tell what Duffy and other 1960s pioneers did while overcoming resistance. It needs to be pointed out they have been shoved aside by the myths and fiction surrounding the 1970 USC-Alabama.

Click here for Part I College football integration lore, in the form of traffic, has been steered down a fairytale exit

Who are the brave pioneers?

But network producers and print writers continue to regurgitate an unvetted story. It’s easier to sell. Their audience wants to believe Bear Bryant was John Wayne.

But let me back up with praise for the “Recruiting,” episode. The film opens and flows nicely with background on the origins of coaches chasing athletes.

Ed Sherman, a long-time Chicago Tribune sportswriter and author of “This is Big,” a 351-page Big Ten history book, appears at the 5:40 mark. Sherman tells the 1903 story of Walter Eckersall, a quarterback at Hyde Park High near the University of Chicago campus. Chicago, then a Big Ten power coached by Amos Alonzo Stagg, and Michigan, led by coach Fielding Yost, made their pitches to Eckersall.

Sherman explains recruiting was previously considered “unthinkable,” but after Eckersall chose Chicago, “everything kind of grows from there.”

Good stuff. So, why not continue using Sherman on film to discuss the Big Ten’s role in integration? Sherman’s book has a chapter on the conference’s history leading integration, “Race in the Big Ten.”

On Page 51, Sherman writes, “There were unwritten agreements about quotas limiting the number of African American players in the first half of the 20th century. Duffy Daugherty changed all that at Michigan State.”

But Sherman doesn’t appear again. Instead, we hear from southern college football historians who piggybacked on the fiction coming out of USC. They took a page from the 1920s southern historians who successfully shifted the narrative on the Civil War to a fight for States Rights rather than to end slavery.

At the turn of the century, President Teddy Roosevelt said America’s three great heroes were George Washington, Abraham Lincoln and Ulysses Grantt. However, by the 1920s, southern historians cast Confederate General Robert E. Lee, a traitor, as a gallant hero, and Grant, the Union General and 18th President, as a butcher and drunk.

As author and historian Ta-Nehisi Coates says in the History Channel’s 2020 documentary on Grant, “And so, the Confederates lost the Civil War, but they certainly won the war of myths. And Grant was on the wrong side of that myth.”

To paraphrase, “And so, Bear Bryant dragged his feet on integration until the 1970s and USC followed quota limitations, but their apologists won the war of the myths. And Daugherty and the true 1960s pioneers were on the wrong side of the myths.”

I will put up my Duffy Daugherty research on his contributions to college football integration compared to Bear Bryant’s dismal record against anybody, anytime, anywhere.

Dedication page: “To all the true 1960s pioneers of college football integration, Black white, North and South, whose courage and legacies have been unjustly overshadowed by myths and fiction crafted around the 1970 USC-Alabama game. The true 1960s pioneers include Michigan State coach Duffy Daugherty’s teams and players opening doors, Duffy’s assistant coaches following his blueprint at their new schools, Duffy’s Chief Engineer for the Underground Railroad, Willie Ray Smith Sr., and the pioneers who were the first Black players on their otherwise segregated campus. The 1960s barriers they broke down cleared the way for the 1970 USC-Alabama game to be played without incident.”

Put simply, celebrating Bear Bryant mythology became a cottage industry at the expense of the true 1960s pioneers. They have been reduced to footnotes, displaced from history. Books and films profit off the 1970 USC-Alabama game myth, spreading fictional roles Bryant played to embellish the game’s significance and obfuscate Bryant dragging his feet on integration.

It has been my experience, through freelance pitches, major media platforms fear challenging the established legend of Bear Bryant. They know their audiences want to view Bear Bryant as John Wayne. One editor told me Bear Bryant gets too much credit yet rejected my story. Another who turned down my story during COVID-19 cutbacks claimed it would be unfair to pay me pennies on the dollar. The gilded story of Bryant waving a wand to end segregation has been easier to sell.