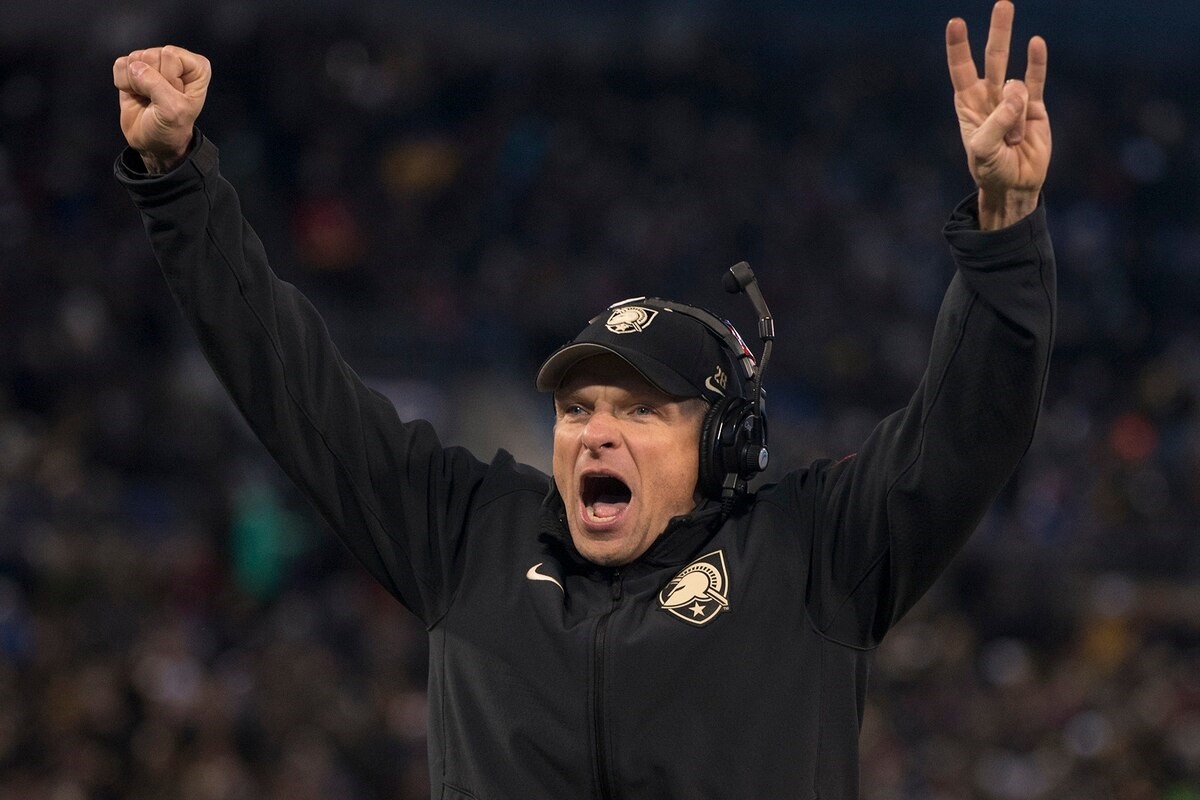 Army football coach Jeff Monken can thank Wake Forest coach Dave Clausen — his old colleague as 25-year-old assistants in 1992 at the University of Buffalo — for another chance to knock off a ranked Power 5 school.

Preseason projections pegged Wisconsin as Army’s Top 25 upset opportunity in 2021, but the Badgers started only 2-3 by the time the teams met last week. The Big Ten power survived with a 20-14 victory at home before 76,314 fans in Madison.

But with unexpected opportunity this week, Army (4-2) faces a tougher opponent. Wake Forest (6-0) presents itself as Power 5 school ranked at No. 16 in the AP poll and No 15 by USA Today. The teams meet at noon Saturday at West Point’s scenic campus.

“We’re playing a Top 25 team and team that is atop the ACC,” Monken said on his Monday in a Zoom call. “They’re well coached. Man are they impressive. They do a great job in all phases. That’s credit to Coach Clausen and his staff. To play a Top 25 team everyone is talking about is a huge challenge and opportunity for us.”

The unanticipated “big game” is approaching a sellout at 38,000-seat Michie Stadium.

“We’ve played them three times since I’ve been here and every game has been a real fight,” Monken said. “We were fortunate to win one of them. I know Dave really well. It will be a tough game for us.”

Monken and Clausen are both in their eighth year as head coaches at their respective program after climbing the ladder as a head coach at previous schools.

“I don’t’ know if we ever discussed (becoming head coaches), but Dave was really smart and had a high football IQ,” Monken said of the year together Buffalo. “When we watched film or in the course of the game, he could see things. He was much better at that than I was. I really admired him for that. That’s why he’s had so much success as an offensive coordinator and now as a head coach.”

Monken has revitalized Army’s program with a 53-41 record since taking over in 2014. His teams have won the Commander-in-Chief’s Trophy three of the last four years in the round-robin series against Navy and Air Force. The Black Knight hadn’t won the C-i-C – the No. 1 goal for all three service academies – since 1996. His Army teams have also won three of four bowl games in the past five seasons after West Point had earned a bowl bid only once (2010) between 1996 and Monken’s first bowl bid in 2016.

Clausen (46-45) is in his eighth year at Wake Forest after a taking over a program that had five straight losing seasons. He went 3-9 his first two years, but since then he is 40-27 with five straight bowl trips.

In recent seasons, Army, with a roster of largely two-star overachievers that are coached up, has been willing to schedule elite Power 5 schools with 4-star talent while in search of a signature win. Such a victory would be a throwback to when the Black Knights played among the nation’s elite prior to their recruiting pool thinned by the Vietnam War era and escalating NFL salaries.

One of the spectators at Oklahoma that night was Barry Switzer, the Sooners’ retired College Football Hall of Fame coach. Switzer said in an interview on his way out of the stadium he was besieged by bewildered Oklahoma fans asking, Coach! What happened?

Oklahoma was scheduled to travel to Michie Stadium last year until the COVID-19 pandemic forced schools to tear up schedules and put together a season on the fly. However, Army did earn a Power 5 date against unranked West Virginia in the Liberty Bowl. The Black Knights lost 24-21 to finish 9-3.

Monken said his players have gained confidence they can do more than compete with ranked Power 5 schools, even though they fell short against Oklahoma and Michigan. Although Army finished 2018 with an 11-2 record, Monken blamed himself for the Black Knights – 1-0 entering the Michigan game – fading to a 5-8 season.

“I think the 2019 game loss to Michigan taught me a lot,” Monken said. “The way that we reacted to that loss wasn’t positive. We should have found a way to positively respond. I’m confident this team will respond. That doesn’t mean we’ll beat Wake Forest, but I don’t think we’re going to suffer any setbacks emotionally, mentally or physical or to our spirit (from the Wisconsin loss).

“We’re disappointed, but I think our guys are highly motivated to perform and improve from their last game. We have to have a chance to beat Wake Forest, but it will take a tremendous effort.”