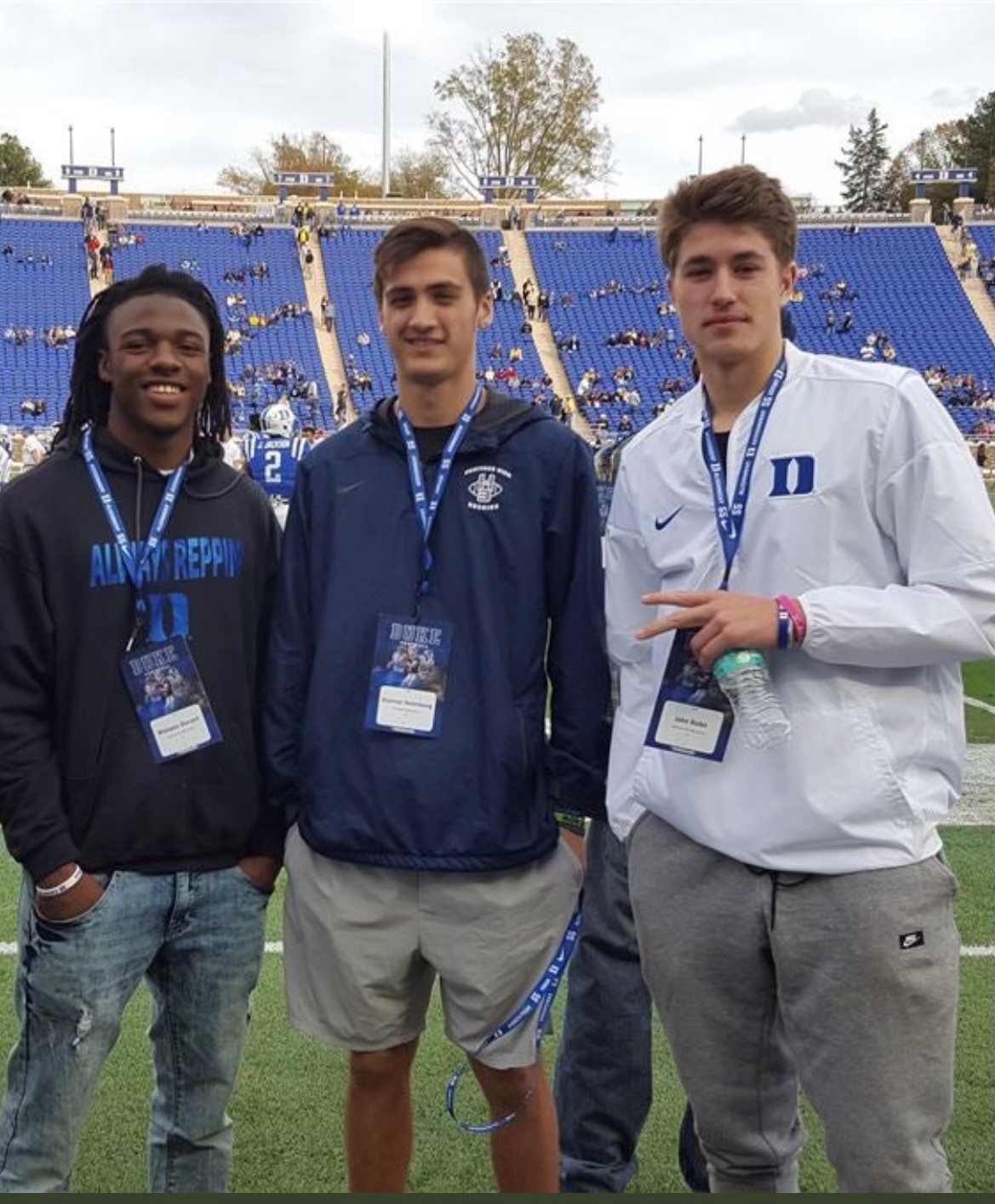 “Three Amigos” was a 1986 movie with Steve Martin, Chevy Chase and Martin Short that the Denver Broncos latched onto quicker than a John Elway pass. Wide receivers Vance Johnson, Mark Jackson and Ricky Nattiel formed a tough combo of options to slow down Elway.

Three Amigos may be an old movie, but it’s a fresh combination at Duke this season through a 3-1 start. In the last two wins over Northwestern and Kansas, the Blue Devils have combined for explosive 300/100/100 balance.

— Quarterback Gunnar Holmberg threw for 314 (31-of-44) with one touchdown and one interception against Northwestern and 328 (22-of-29), Kansas. He’s in his first year as a starter.

— Running back Mataeo Durant ran 22 times for 102 yards and a touchdown against Northwestern and 21 for 124 and one TD, Kansas. He was the ACC’s leading returning rusher, but he’s in his first year as the featured back.

— Wide receiver Jake Bobo caught 11 passes for 109 yards against Northwestern and seven for 105 with a career-long of 48 against Kansas. He’s leading the team with 34 catches and 385 yards as a second-year starter. He also is a semifinalist for the Campbell Trophy, college football’s academic Heisman.

“All three of us have worked our tails off,” Bobo said. “Over the last couple of years, we’ve definitely seen that with Taeo last year and this year as well. And then Gun, to see him come into his own this year. To be able to do that together – obviously Gunnar and I were roommates freshmen year, really good friends, and Taeo the same – it’s kind of always been the three of us. At least through four games, and we plan on doing it the rest of the year together. It’s cool to me, and I hope they would say the same, but cool to see it play out.”

Duke needs more explosion on offense and fewer explosive gains against its defense when the Blue Devils open ACC play against North Carolina (2-2, 1-2 ACC) at noon Saturday at Kenan Stadium in Chapel Hill.

The Three Amigos arrived together in 2018, although Holmberg, a 6-foot-3, 205-pounder is now a graduate student with junior eligibility; Durant (6-1, 195) and Bobo (6-5, 215) are both seniors that played as freshmen. When they met on a 2017 recruiting trip, there was a quick bond. Bobo traveled the furthest from Belmont (Mass.) Belmont Hill; Holmberg from Wake Forest Heritage and Durant Plum Branch (S.C.) McCormick. They posed for a pre-game photo snapped by Holmberg’s mother, Jennifer.

Too late, Jake. There are no secrets in the digital world.

“In recruiting, you look at the school aspect, you look at the football aspect and then you look at the people,” Bobo added. “I had similar schools and similar options. It came down to I liked the school, I liked coach Cut (David Cutcliffe) and the program he’s heading. I liked those guys and the guys that were coming in with me. They were a point of emphasis. I’m happy to see the way it’s playing out.”

Explosive were needed after last year’s 2-9 record. One way the Blue Devils have been making that happen beyond running and throwing was on display against Kansas. Two of the touchdown paths to the end zone were examples of textbook downfield blocking.

Midway through the second quarter, Holmberg hit Jalon Calhoun at about the 10-yard line. Calhoun followed a block from wide receiver Jarett Garner into the end zone to regain the lead, 21-17. Garner’s sustained his block, pushing the defender back on his heels for two or three steps, until Calhoun had an unimpeded path to the end zone.

Early in the third quarter, with Kansas leading 27-21, Holmberg was flushed out of the pocket running to his right. He escaped the grasp of a tackler – the kind of play he made routinely in high school — and found Durant as his sideline dump-off option

Durant took the pass and burst down the sideline. Key blocks opened enough running room to gain 53 yards to the 8. His final 20 yards were the result of sustained downfield blocks from wide receiver Eli Pancol and tight end Jake Marwede. Not just blocks, but sustained blocks as they kept pushing back the defender without knowing the magic Durant was working behind them.

“We have a phrase for it here,” Bobo said. “Body on body and not looking back when ball is moving, especially with 21 (Durant). You know he’s going to go ahead make something shake out of nowhere.

“It’s something we harp to get body on body, as we say, to create lanes for the runner. You definitely saw that on Saturday on Taeo’s run on his catch and on that Jalon screen as well. It was definitely cool to see it on film after we’ve been harping on it all season and all offseason.”