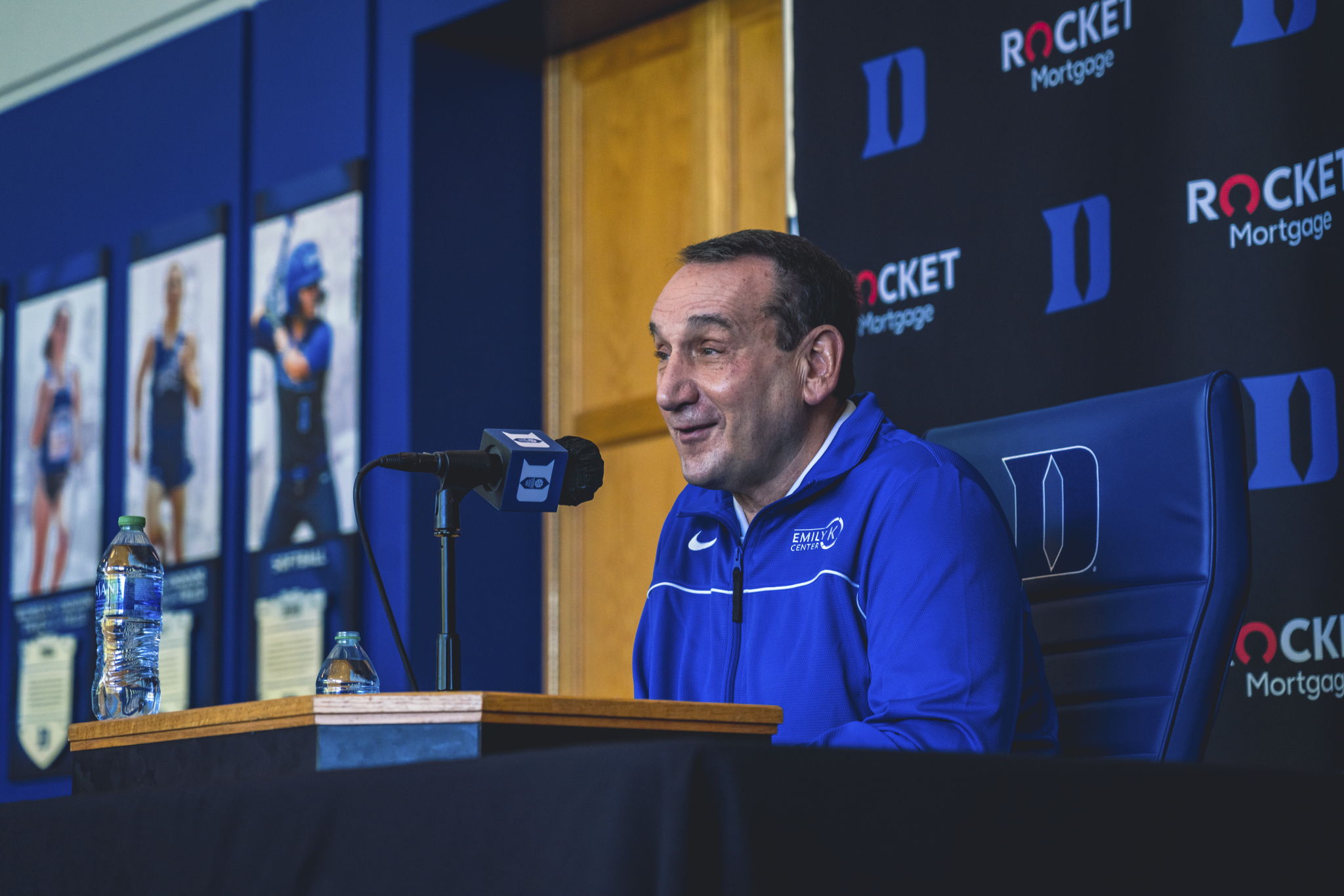 DURHAM – The “L” word is part of college basketball. Everybody loses games, even Duke in each of its five NCAA championship seasons. There hasn’t been an undefeated college basketball national champion since Indiana (32-0), 1976.

But the “L” word is most definitely banned from Duke basketball this year. The “L” word as in “last.”

It is never to be mentioned, by orders of coach Mike Krzyzewski, the retired U.S. Army captain as he enters his final season before he’s a retired Basketball Hall of Fame coach.

No one is to say “this is the last year this” or “the last time this” in the 2021-22 season. He wants the focus on the moment, working toward a national title – just as it has been throughout Krzyzewski’ career.

“Nobody has used it yet,” grinned Duke assistant coach Nolan Smith seemingly when asked if the punishment was running laps. There seemed to be a hint of trepidation in his smile.

Coach K met with the media Tuesday for first day of practice. The season begins Nov. 9 against Kentucky in the State Farm Classic at New York’s Madison Square Garden.

“I’ve told my staff and everyone around me not to use the word ‘last,’” Krzyzewski said. “This is my 47th year and my 42nd at Duke. I’m going after it the way I’ve gone after it every year. As soon as you start savoring – remember this thing – you open the door to rationalization, to not putting all out. In other words, it’ll be OK not to do it at this level. I know this can take place. We’re not going to have any of it. I’ll savor it in May or whatever.

“Right now, I want to live – not savor. Being in the moment is something I’ve tried to do my entire career. In order to have continuity and success, you can’t savor anything. You have to be in the moment you’re in. For the last four decades, we’ve made a mark on college basketball. I’d like to make another mark before I leave this decade.”

The returning starters are junior guard/forward Wendell Moore, a 6-foot-5, 213-pounder who has lost seven pounds and feels more athletic; sophomore guard Jeremy Roach (6-1, 172), who has point guard experience; and sophomore center Mark Williams (7-0, 142), who is expected to build on his strong second half to last season.

Coach K’s retirement announcement in June included naming top assistant Jon Scheyer the head coach in waiting. Krzyzewski said not much will change in practice preparation or on game day. He will seek input from Scheyer just as he always has and Scheyer will speak up just a as he always has.

“His suggestions have been there for a while,” Krzyzewski said. “The other two guys (assistants) are good, too, Nolan (Smith) and Chris (Carrawell). I’ve got an outstanding staff – not a good one.”

He added the continuity has aided recruiting, although he enjoyed not being on the road. Scheyer has top commitments for the Class of 2022: 5-star forward Dariq Whitehead; 5-star center Dereck Lively; 5-star forward Kyle Filipowski; and 4-star guard Jaden Schutt.

“If we didn’t do that (name a successor in place) we wouldn’t’ have the recruiting class we’re having – maybe the next two recruiting years,” Coach K said of business as usual. “My guys have worked so hard on the road and on the visits. We’re hand in hand.”

Krzyzewski, though, did make one concession to his last regular-season game against North Carolina, March 5, at Cameron Indoor Stadium. He put up for auction four tickets to the game at the Jimmy V Wine Celebration in Napa, an annual cancer-fundraising event he has helped organize the past 12 years.

“It went for $1 million,” Krzyzewski said. “Part of it was – the people who did it – was to say thank you. That’s good thank you note.”