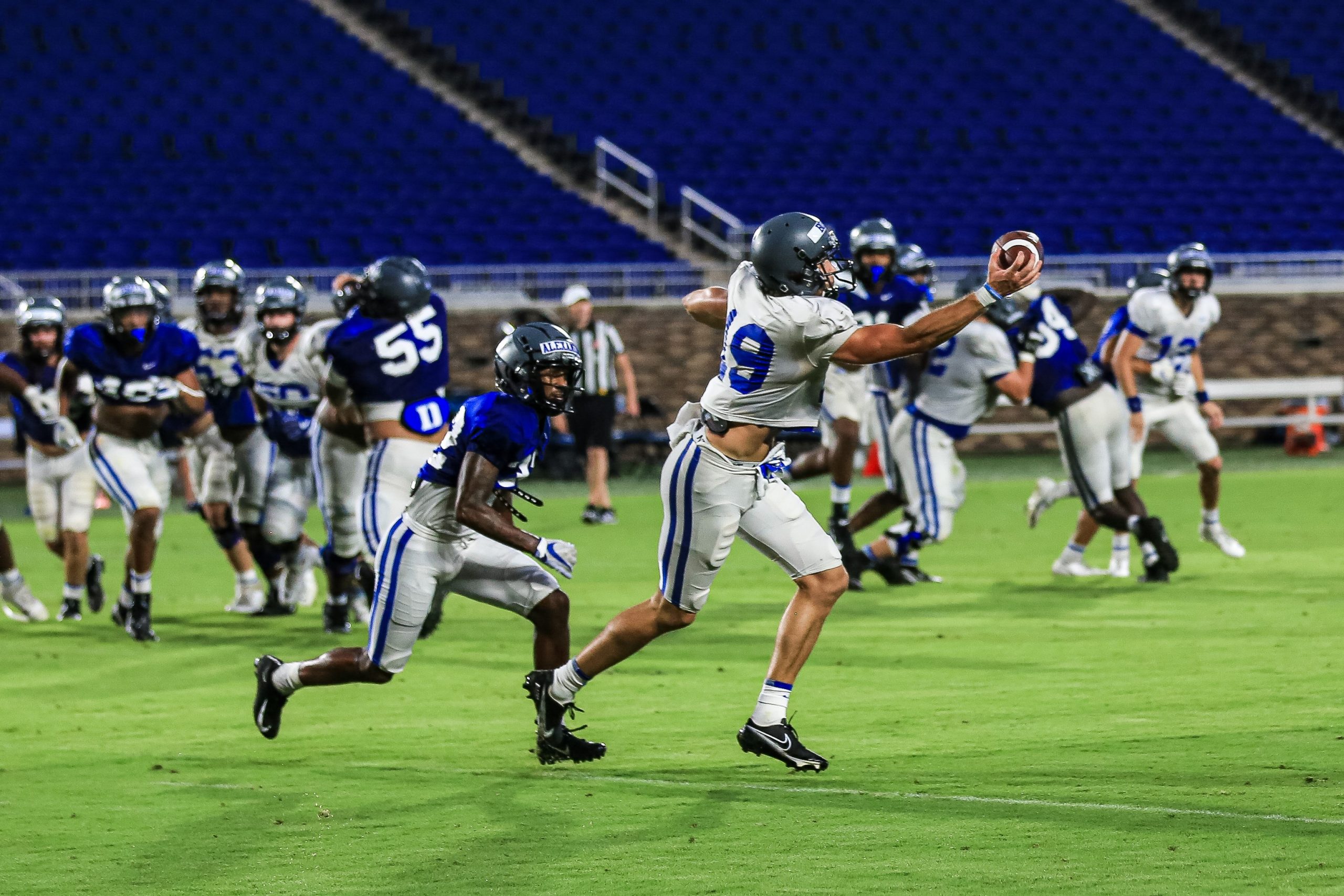 DURHAM – Duke quarterback Gunnar Holmberg rolled to his left for some running room in Saturday night’s first scrimmage when he was tackled near the sideline. He said he was eager for some live action.

The Blue Devils open the season Sept. 3, a Friday night, against Charlotte at Jerry Richardson Stadium. It will be Holmberg’s first career start after redshirting in 2018, missing 2019 with a knee injury and seeing limited time last season as a backup.

Duke coach David Cutcliffe liked enough of what he’d seen by then. He had Holmberg wear the “hands off” green jersey for the final quarter of the 85-play scrimmage. Holmberg finished 3-of-8 passing for 36 yards and ran eight times for 15 yards.

“I thought we had some outstanding plays early from the offense running the football,” Cutcliffe said. “I thought Gunnar had a good day. He was efficient throwing the football and took care of the ball.”

Duke shuffled its lineups mixing first- and second-unit players rather than 1s vs. 1s or 1s vs. 2s. Cutcliffe said that was to spur competition for starting jobs, although he added that will make for a long night reviewing film.

“The only way to get true evaluations is mixing what’s good against good,” Coleman said. “A guy may look great working against a lower level player and then you put him against the best. That’ while it will be an all-nighter evaluating for us.”

Two players that were limited in their playing time were senior running back Mateo Durant and center Jack Wohlabaugh.

Durant, a preseason All-ACC choice, was limited due to missing practice earlier in the week with a non-COVID illness. He carried four times for 44 yards. In his place, redshirt sophomore Jaylen Coleman led the ground game with eight carries for 80 yards.

“I thought they all looked good, but Jaylen Coleman’s speed show up,” Cutcliffe said. “He’s explosively fast. You got to remember in high school he was a track star. But I’m not displeased with any of those backs.”

Wohlabaugh,a 6-foot-4, 305-pouinder, is recovering from knee surgery that cost him the 2020 season. He was pulled early after Cutcliffe liked what he saw. Casey Holman (6-4, 290), who has started at tackle in the past, worked at center along with redshirt frehman Addison Penn (6-3, 300).

Freshman quarterback Jordan Moore put up the biggest numbers highlighted by a 65-yard touchdown run. The 6-2, 180-pounder, who enrolled early, ran seven times for 128 yards and completed 4-of-7 passes for 39 yards. He displayed quick feet, senses pressure from the pass run and then running for 22 yards.

“He stuck out with his explosive speed, absolutely,” Cutcliffe said.

The defensive line is replacing three starters, four if Fry’s move from tackle to his natural position of defensive end is factored. Frye is one of the two anchors in the rebuild along with redshirt sophomore DeWayne Washington (6-3, 300).

“I saw Michael Reese flash a lot,” Cutcliffe said. “We know what DeWayne can do. Michael made a real move in the right direction. Ben plays every down like it’s the last one. I think if we keep on that path, we’ll be fine on the defensive front.”