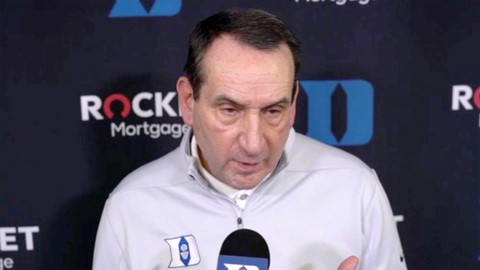 Duke basketball fans obviously felt relief to watch the recruiting train continue delivering the goods sans the usual lure of a chance to play “for the best coach in America” – the frequent comment from players announcing their commitment to the Blue Devils.

Krzyzewski and Scheyer might have felt relief, too, no matter the confidence they felt with the succession plan that was announced in early June.

“I like the fact were off to a really good start in recruiting,” Coach K said in a Zoom call Wednesday with the media.

Perhaps, no one was less surprised with the two early big-time commitments than senior Joey Baker and his returning teammates.

“Honestly, I think it will be seamless,” Baker said in the same Zoom call. “Coach Scheyer does such a good job building relationships. He was the main recruiter when I was in high school. The relationships he was able to develop – I’ve trusted him fully. That’s similar how these other players that committed feel. He’s such a genuine guy, he knows his basketball and he has everyone’s best interests. It should be seamless transition.”

Coach K is hosting his 18th annual Coach K Academy, an event for fans to learn basketball from him, although for a hefty fee. Coach K uses it as a fund-raiser for his charity causes, such as the Emily K Center that supports Durham students seeking help on a path to college.

“We service about 2,000 kids now,” Krzyzewski said. “We want to service every kid in high school in Durham if they need it.”

Coach K added stepping back from recruiting has allow more time with the returning players – valuable time missed last year due to the COVID-19 pandemic – and studying film.

“I was ready not to be on the road,” he said. “It’s not like I hated recruiting. It’s the amount of time you have to spend and commit to be really good every year. I knew I wasn’t going to do that anymore. But as far time preparing the team, I’ve been watching tape.”

Krzyzewski says the Blue Devils will be a bigger team that can play with physicality it lacked last year.

Mark Williams, a 7-foot, 242-pounder, will be a year-long presence inside after experiencing a breakout in last season’s final month and a half. In the final 14 games, he led the team in rebounding, 6.1; field goal percentage,.684, and blocked shots, 28. He also was named All-ACC Tournament second team after averaging 18.0 points and 10.0 rebounds in wins over Boston College and Louisville.

Even the Blue Devils aren’t immune to the a new era of quickly changing rosters. Duke lost Jalen Johnson to the NBA draft at midseason when he quit the team and Matthew Hurt and D.J. Steward to the NBA the traditional way at the end of the season. They lost Jaemyn Brakefield and Jordan Goldwire as transfers.

“The fact I’m  not thinking about recruiting all the time has been good,” he said. “It’s given me time to concentrate on this team. I like that a lot. I’m excited about this year. It’s been good.”

Coach K frequently said he liked “my guys.” When he talks “my guys,” you know he’s happy camper.