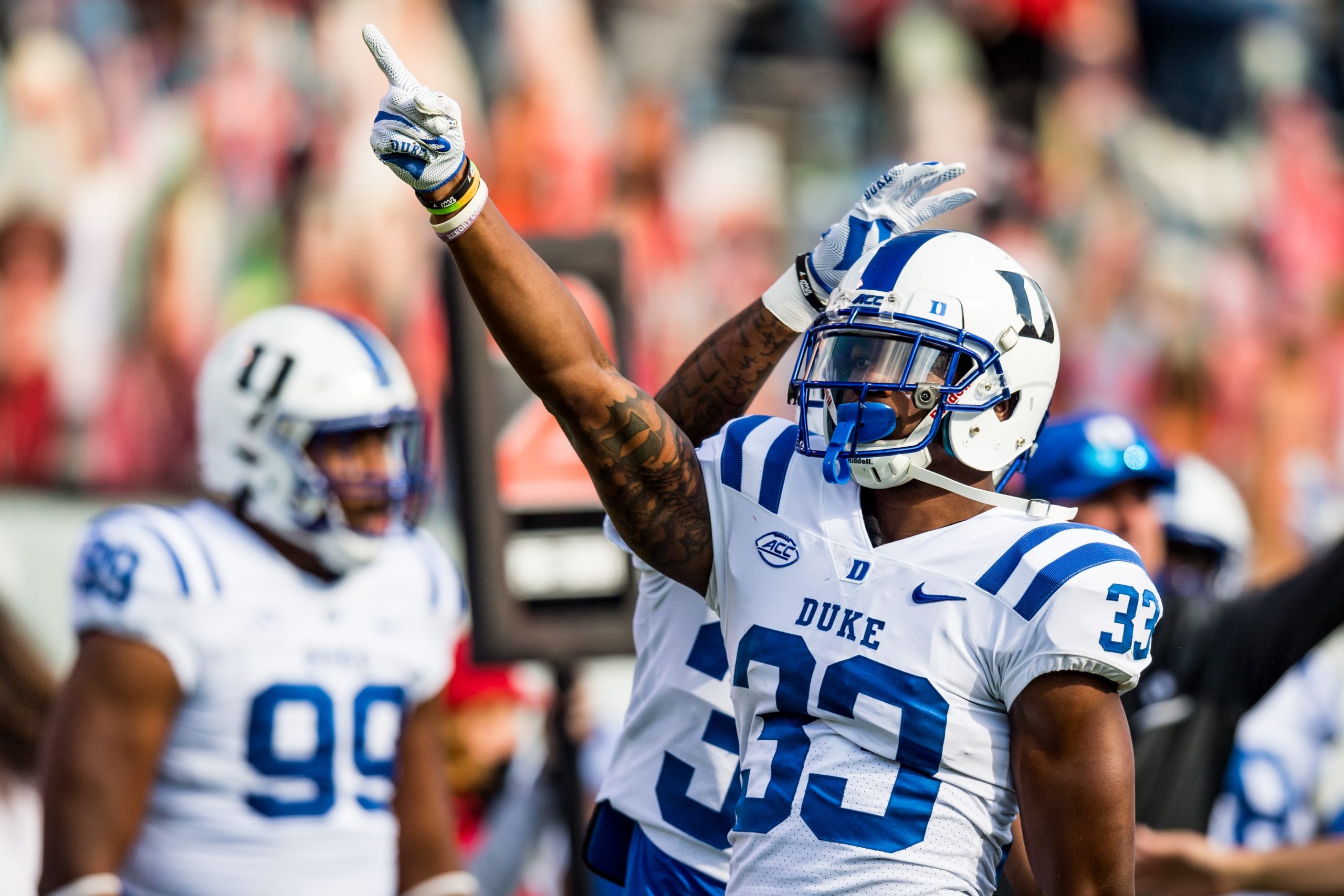 DURHAM – Two NFL rookie defensive backs from Duke are impressing their respective teams with their training camp and preseason play – Michael Carter II with the New York Jets and Mark Gilbert with the Pittsburgh Steelers.

Nobody is watching them closer in preseason games, texting them and calling them than redshirt senior Leonard Johnson, Duke’s third-year starting cornerback.

“That’s motivation,” Johnson said after Monday’s practice. “Seeing those guys out there balling and playing. I’m cheering them on. I’ve watched every game those guys have played.

“I still talk to those guys. I send them clips of my one-on-one work. ‘Hey, Mark. Hey, Mike. How can I get better? What did I do wrong? How do you critique this?’ Those guys, they made it. If they give me any advice, I embrace it – take it all in.”

Carter played in all 11 games in a 2-9 season on a defensive that gave up too many big plays, but he earned third-team All-ACC honors. Gilbert was only able to play two games before shutting it down due to past injuries.

But the team’s disappointing performance didn’t prevent the NFL from finding them. Carter was a fifth-round draft pick, while Gilbert signed as an undrafted free agent.

For Gilbert, though, this has been a comeback. He was gaining notice as a potential first-round pick following his 2017 sophomore season as a first-team All-ACC cornerback. He was off to a fast start in 2018 until suffering a career-threating hip injury in his second game. He was unable to play in 2019 and then shut it down after only two games in 2020.

The message Johnson takes from their NFL opportunities was he’s receiving proper coaching for a shot at the next level.

“I’m not thinking too far ahead,” Johnson. “I know (the NFL) will be based on the games. How I play will determine if the next level comes.”

Johnson, a 6-foot-1, 190-pounder from Hayden, Alabama, first broke into the starting lineup in 2018 with nine starts. His playing time increased with Gilbert’s injury. Johnson also gained experience with the versatility of playing safety and nickel back before earning his spot at cornerback.

“It’s, wherever coach needs me in the best position for the team to win,” he said. “If they want me at corner to shut down half the field because we play so much man, I’ll do that. They need me to play safety, I’ll do that. Or if I need to play nickel, I can do that.”

“They remind me of when I came in with our group of defensive backs that stuck together,” Johnson said. “That’s how they are now. They’re building chemistry and learning to be versatile.”

Something they may also learn with their time at Duke is the value of special teams not only to help the Blue Devils but how it has helped Carter and Gilbert in their first NFL training camp.

“I try to get on any special teams,” Johnson said. “Your film is your resume.”

Daly’s stories on James Bond, Duffy, Biggie, breakfast with The Bear and quotes Bryant’s apologists don’t want you to hear