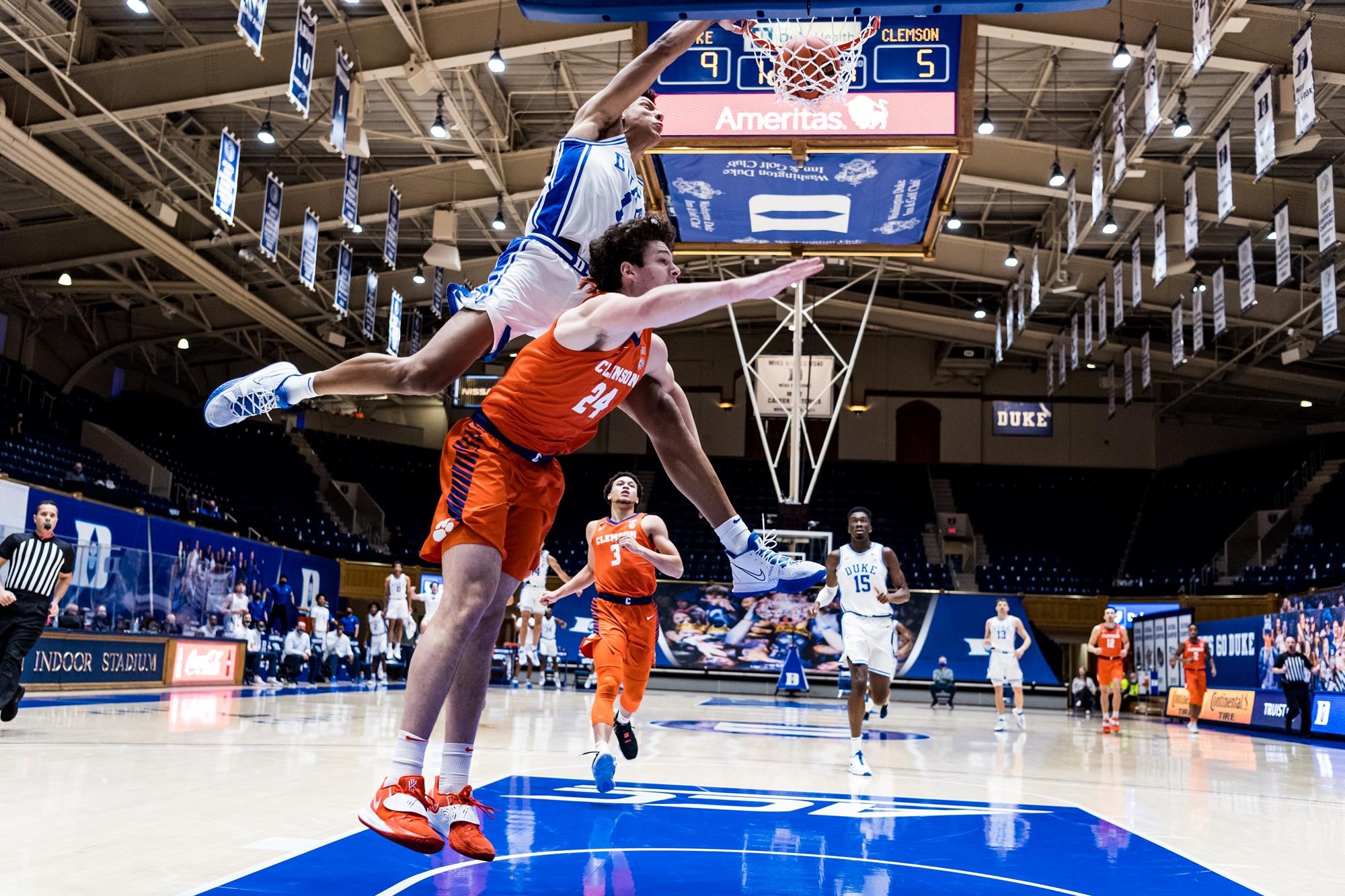 Plenty of guys saw the floor because the game was in hand the final 30 minutes. Duke toyed with Clemson, winning 79-53 Saturday at Cameron Indoor Stadium.

It wasn’t Duke’s first romp, but Clemson isn’t Bellarmine. The 26-point margin was the largest of the year, surpassing a 22-point win on Dec. 4 over Bellarmine, 76-54. But Clemson was a 10-win team that has been projected as an NCAA Tournament qualifier – an identity Duke is still chasing.

Freshman Jalen Johnson, who started, was one point shy of double-digits with nine points, eight rebounds, five assists and two steals. But he also sparked a 13-3 run with a steal and a spectacular dunk . The Blue Devils’ lead jumped from 9-5 to 22-8.

“We’re getting familiar with each other,” Krzyzewski said. “We’re just putting this team together where everyone is healthy in the last couple of weeks. Jalen makes you like passing. Mark’s emergence in understanding the physicality of the game. He really has understood that in the last week in practice.

“Nate James was working with our big guys at 8 a.m. this morning. They’re putting in extra work. Jalen’s familiarity, our familiarity with each other and then passing to Mark is different than passing to anyone else on our team. Our guys are unselfish kids so they’re looking for one another.”

Surging Duke (7-5, 5-3 ACC) has now climbed ahead of slumping Clemson (10-5, 4-5 ACC). After three narrow losses in winnable games that raised questions about whether Duke could come together in time, the Blue Devils have won two in a row. Next up is Miami (6-9, 2-8 ACC) on Monday in Coral Gables.

Krzyzewski used his eighth starting lineup in 12 games, inserting senior guard Jordan Goldwire back among the starters with Moore, Hurt, Johnson and Steward.

Goldwire came off the bench in Tuesday’s win over George Tech, an effort Coach K called Goldwire’s best of his career. He only scored four points, but his leadership and other numbers are what drives Duke. He contributed six rebounds, five assists, no turnovers and recorded two more steals. He leads the ACC in steals and assist/turnover ratio. He has had two or more steals in 11 of 12 games. The last five games his assist/turnover ratio is 30/5.

Steward, who was 4-of-7 from the field and 2-of-4 from three-point range, was asked if it was Duke’s most complete game.

“I would say so. Our offense was really good, our defense was good. Everything was just clicking for us today. We really followed the game plan we executed it.”

Krzyzewski opened his post-game media session with a tribute to John Chaney, the Temple coach that died on Friday at age 89.

“He absolutely was one of the best coaches ever. He served as a great example. He knocked down a lot of barriers. In the late 80s and early 90s, he, John Thompson and George Raveling … those guys were giants. On conference calls during that period of the time they were fighting for rights of African-American kids. We had some of the most emotional phone calls that lasted to 1 or 2 in the morning. You know how elegant john Thompson was and George. When John Chaney spoke you could feel there were other people he was talking about. It sent chills through you.

“God bless him. We had a moment of silence for him before the game. That’s the most important thing today, to remember him.”

Duke playing like it is already advancing in the NCAA tournament