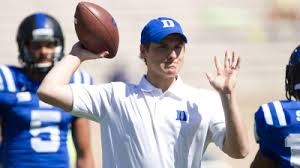 Duke coach David Cutcliffe announced he’s shuffled his coaching staff following a 2-9 season, but the most significant move involved the head coach. He’s given up the play-calling duties and going back to a CEO role.

This time last year Cutcliffe took over the play-calling duties while planning for the 2020 season. But that was before the COVID-19 pandemic wiped out spring football, off-season training and limited time working with a new quarterback.

It wasn’t so much the play-calling that concerned Cutcliffe as the season unfolded. It was realizing he needed to to spend more time overseeing the program under the unusual circumstances.

Duke is preparing for 2021 facing many of the same limitations since the COVID-19 protocols are likely to remain in place for several months. The vaccination process toward herd immunity is underway but with a long way to go.

“The biggest change is me coming out of that (offensive planning) room and getting back to being our head football coach,” Cutcliffe said. “I did a really poor job. If I had to critique one thing from the short time that we had was I needed to be across the board the head coach.

“I’ll be involved the offense, the defense the kicking — all the phases of the program. That will take the focus of my attention on to building our team. That’s the most important job I have. I could not be more excited. I just had a team meeting. I believe they’re excited about this new beginning.”

The staff changes start with Jeff Faris taking over the play calling duties while sharing the offensive coordinator role with Re’quan Boyette. Faris will coach the quarterbacks after directing tight ends a year ago. Boyette moves from coaching running backs to wide receivers.

Zac Roper moves to tight ends after coaching the quarterbacks the past four years and calling plays two seasons ago. The lone addition to the staff is on the offensive side of the ball with Calvin Magee to coach the running backs. Magee, a former NFL tight end, formerly coached at Ole Miss, South Florida, West Virginia, Michigan, Pitt, Arizona and New Mexico. Greg Frey remains with the offensive line.

“It’s not necessarily the play calling in itself,” Cutcliffe said of the change. “It’s the preparation that goes into getting the offense ready. It’s all the hours and hours of staff meeting and film study. We critiqued this. I don’t think the play calling was our problem except maybe trying to do too much. Pressing a little bit.”

Faris will be working with a new quarterback following Chase Brice’s departure for Appalachian State after his one season as a graduate transfer from Clemson.

Gunnar Holmberg, last year’s backup, returns as a 6-foot-3, 205-pound redshirt junior. Luca Diamont (6-3, 180) was a freshman last year that will benefit from spring football. He was an early enrollee last year planning on spring ball until the pandemic hit.

The incoming scholarship quarterback is Jordan Moore (6-1, 175), a three-star dual-threat prospect from Towson, Md. He has enrolled for spring football that begins Feb. 27. The other quarterbacks on the roster are Robert Nelson (6-3, 205), Jack Colyar (6-3, 190) and Gavin Spurrier (6-4, 2015). Spurrier is the grandson of former Duke coach Steve Spurrier, a College Football Hall of Famer and the 1966 Heisman Trophy winner.

“I feel good about the people in the room. The athleticism in the room has taken a big jump and that prove to be good for us.”

My MSUings on loss to Indiana