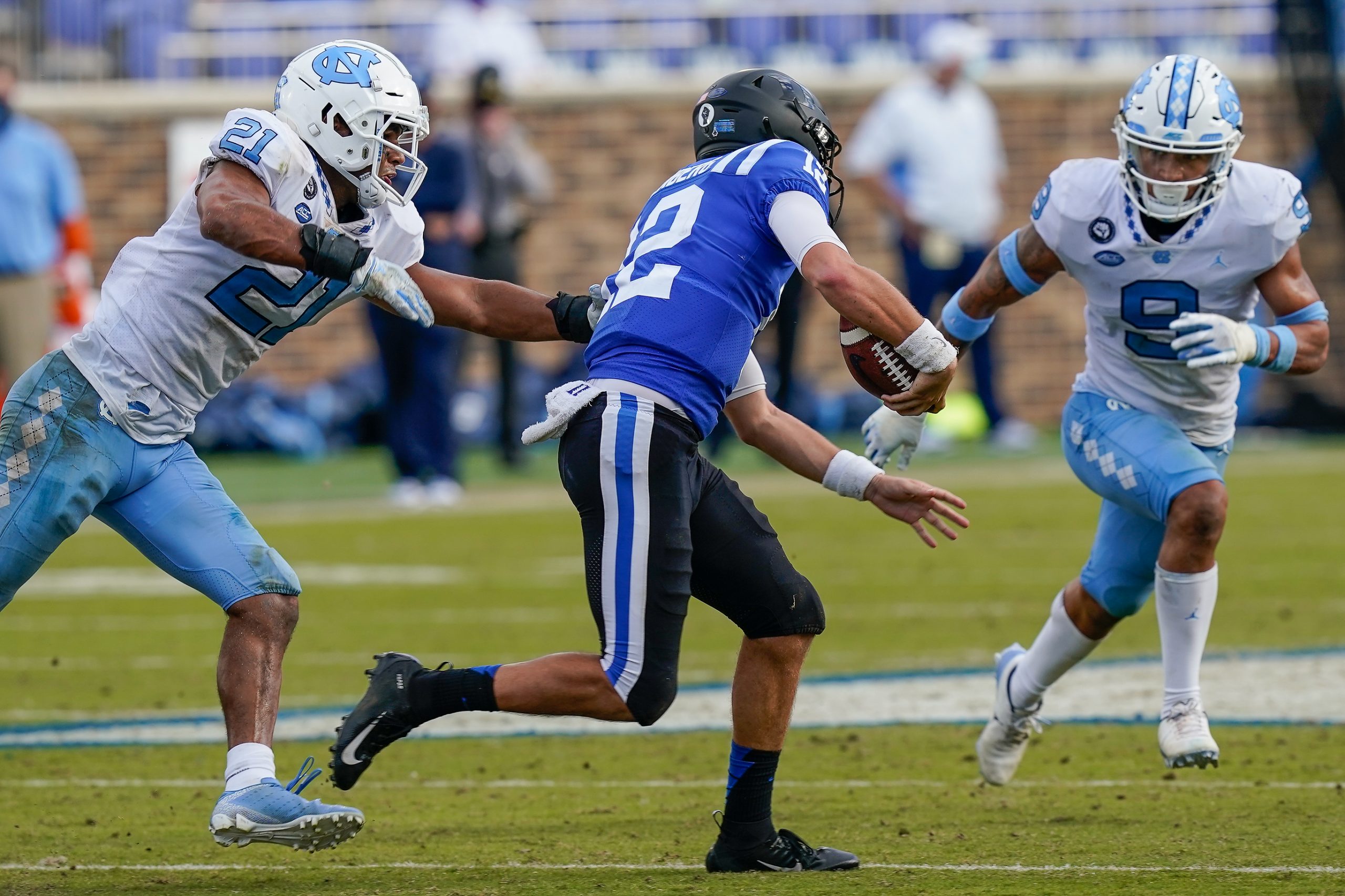 North Carolina rang the Victory Bell on its rival’s field Saturday at Wallace Wade Stadium. The bell tolled for Duke.

The Tar Heels (5-2, 5-2 ACC) ringing a 56-24 victory meant they remained alive for one of the two berths in the ACC Championship game. With the 2020 reshuffled schedules, due to the COVID-19 pandemic, the first- and second-place teams advance to Charlotte.

The bell tolling for the Blue Devils (2-6, 1-6 ACC) was more than one-sided loss to their rival. Whatever slim hopes they had of finishing the year near a .500 record have been replaced by just seeking a third victory to a disappointing season.

The two teams were as close entering the game as recent weeks had suggested. UNC had lost two of three, while Duke had won two of three.

But a favorable condition of North Carolina’s hopes was that No. 1-ranked Clemson knocked off No. 4 Notre Dame later in the day. It didn’t happen. The Irish won 47-40 in double overtime. Notre Dame (7-0, 6-0 ACC), playing as a full ACC member due to the pandemic, remained two games ahead of the Tar Heels in the ACC standings. North Carolina’s hope had been to upset of Notre Dame in two weeks when the Irish visit Chapel Hill. That would earn the head-to-head tiebreaker for the second-place berth.

North Carolina doesn’t have that opportunity to tie Clemson (7-1, 6-1 ACC). The Tigers aren’t among the Heels’ remaining three conference games against Wake Forest, No. 14; Notre Dame, Nov. 27; and at Miami, Dec. 5.

North Carolina’s bounce-back victory from a loss to Virginia was again fueled by their 1-2 punch on the ground. Javonte William finished with 12 carries for 151 yards and three touchdowns and Michael Carter added 17 for 85 and one touchdown.

“The combination of those two has been powerful for us,” North Carolina coach Mack Brown said. “I do think we may have the best combination of running backs in the country.”

The Tar Heels rolled up 338 yards rushing and 573 total yards. Sophomore quarterback Sam Howell was 18-of-27 for 235 yards with three touchdowns and one interception.

Duke was stunned by UNC’s fast start and coach David Cutcliffe was further stunned by how his team’s reaction to the quick punches.

“I addressed it at halftime,” he said. “Our guys expected to come out and play well. I did as well. When you expect to come out and play well and then play poorly, it escalated. I told them at halftime you can’t expect go there when stunned. You got to run back to what stunned you. I thought we tried to do that in the second half. I thought we competed and continued to compete.”

Mataeo Durant ran 11 times for 132 yards with a 46-yard touchdown run, but otherwise the Blue Devils were unable to sustain drives. Porter Wilson punted for times; Duke turned the ball over twice on quarterback Chase Brice’s interception and Deon Jackson’s lost fumble. Brice was 11-of-23 for 155 yards without a touchdown. The Blue Devils have coughed up the ball 25 times this season.

With the game out of hand, Cutcliffe began to prepare for the upcoming bye week with giving younger players some experience. Redshirt sophomore quarterback Gunnar Holmberg finished 7-of-9 passing for 71 yards.

The players let down their coach: “It’s a damn shame”