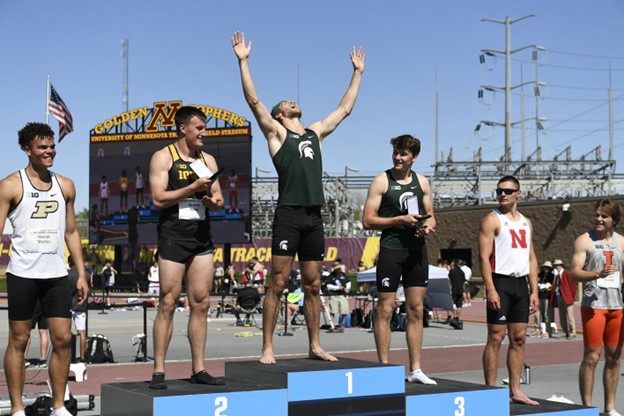 Michigan State’s 2022 track and field season opened with Ryan Talbot essentially a newcomer to the decathlon, the 10-event all-around athleticism test. The COVID-19 pandemic wiped out his first college season, 2020. He was injured in 2021. By 2022, his career goals of a Big Ten title and school record remained only a vision.

“I guess I have to set some new goals,” said Talbot, a surprise story who ranks sixth in the nation.

Next up, he can add to his emerging identity while competing in his first NCAA Championships at Oregon’s famed Hayward Field. The decathlon begins Wednesday afternoon with the 100 meters and ends Thursday evening with the exhaustive 1,500 meters. The men’s and women’s meet continues through Saturday.

Talbot’s rise has been rapid, but unfortunately for him he has come along at a time his sport doesn’t command the prestige it once owned on the American sports landscape. When Talbot returns to campus in the fall, will he be any more recognizable than, say, Michigan State bespectacled punter Bryce Baringer?

The question is enough to make Jim Thorpe roll over in his grave. Thorpe, upon winning the 1912 Stockholm Olympics decathlon gold medal, was called “the world’s greatest athlete” by Sweden’s King Gustav V.

Jenner, who beat the Soviets at the height of the Cold War, landed on breakfast tables in the form of iconic Wheaties cereal box covers. When NFL general managers explained an obscure late-round draft pick was “the best athlete available,” cynical sportswriters wrote, “What about Bruce Jenner?”

But American sports tastes change. The career of Dwight Stones, a long-time track TV analyst, dates to the bygone era as a high jump world-record holder and two-time Olympic bronze medalist, 1972 and 1976.

“I think it’s getting worse for the decathlon,” said Stones, who will be working ESPN’s coverage of the NCAA meet. “The big guys with speed can make millions playing football. When I was competing, I didn’t make a lot of money, but we competed before big crowds and that was fulfilling.

“Track has done nothing to capture the imagination of the casual sports fan. Track is married to tradition. We’re stuck in the mid-20s in sports popularity.”

“I didn’t know there was a time when girls didn’t have sports,” said Sally of her 1980s career at Caledonia High and as a 1990 Academic All-Big Ten track athlete.

Sally had more expertise than a typical parent while watching Ryan as a 16-foot pole vaulter in high school. Ryan also eagerly competed in other events to contribute team points. When Sally noticed Ryan grew frustrated with a lack of progress in his specialty, she reminded him of his potential in the decathlon. Ryan also was a veteran of Parkour, a competition of acrobatic flips off buildings and navigating obstacle courses, and a diver on the high school swimming team. In other words, he’s fearless.

“I had mentioned the decathlon to him before, but this time he was ready to listen,” Sally recalled. “I told him you can do 10 events.”

“You can do all that?” perked up Ryan.

Then Ryan queried his coaches.

“I learned it was considered track’s toughest competition, and the Olympic gold medalist is called the world’s greatest athlete,” Ryan said. “That was very enticing.”

“At meets, I’ve met a lot of moms of decathletes who were also multi-event athletes,” said Sally, a physical therapist who owns and operates Health Motion Physical Therapy in Grand Rapids.

After all, the era of kids learning about the decathlon from sports and Wheaties box covers appears long gone.

Ironically, an important step to Talbot’s college success was the spring college sports was shut down due to the COVID-19 pandemic. When the 2020 season was canceled and campus closed, Ryan was able to return home to what was essentially family gym based on equipment accumulated through his mother’s career.

“My passion is working out,” he said. “I like to set crazy goals.”

Talbot added he has benefitted from teammate Heath Baldwin, a junior from Hackett Catholic Central. Baldwin was third in the Big Ten meet with a personal best 7,650 points to advance to the NCAA meet.

“He’s strong in events that are my weaker events,” Talbot said. “We learn from each other. It’s a symbiosis.”

Talbot’s Michigan State roots include his father, Mark, an MSU swimmer until a shoulder injury. His great uncle, Glenn Burgett, competed for the Spartans in the 1950s in football and track. His great uncle represents another bygone era — one when multi-sport athletes were common.

Brad Van Pelt, Michigan State’s 1972 All-American linebacker/safety, is considered the Spartans’ greatest all-around athlete. The College Football Hall of Famer was a three-sport letterman in football, basketball and baseball. He was drafted in both football and baseball, but he chose football, enjoying a 14-year NFL career as a five-time Pro Bowler.

Van Pelt played college football as a 6-5, 221-pounder, a profile the 200-pound Talbot, who is still growing into his body, could fit. But in today’s college football, a player with the height of Van Pelt or Talbot would be asked to pump up to 235 or 240. Such weight would be too bulky for Talbot in track. Hence, another reason the lack of crossover in modern football and track.

But that’s not all that has changed about track and field. The sport is behind the times in name, image and likeness deals now legal for college athletes.

“Not yet,” Talbot said of a signing a deal. “I’ve got to start reaching out. I’ve got to get my name out there.”

Duke’s Three Amigos proving to be a balanced combination