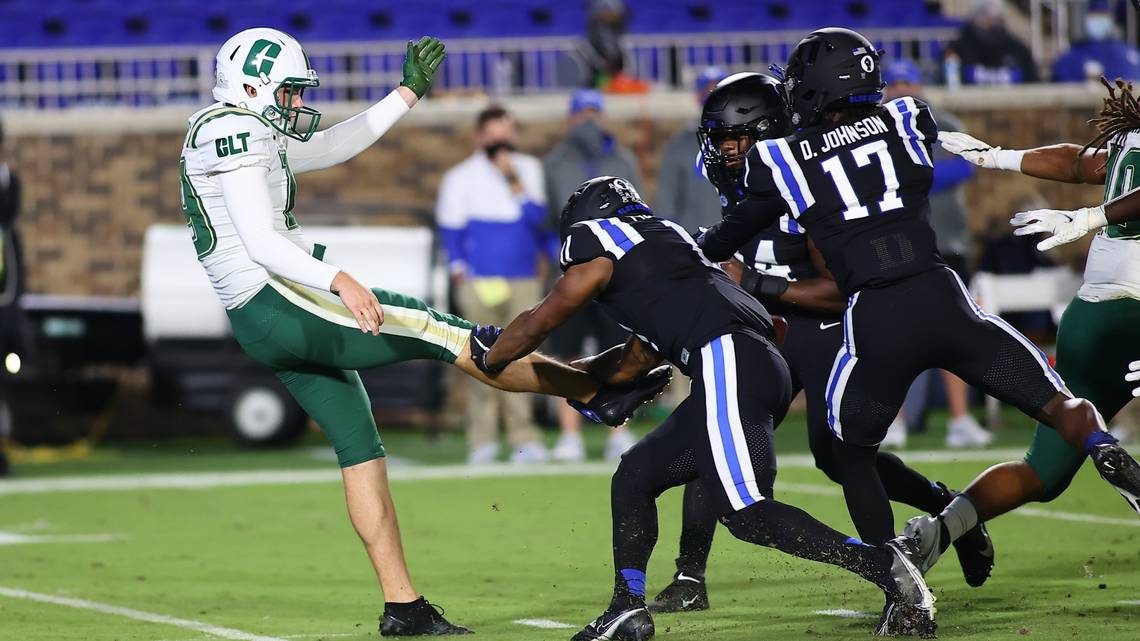 Duke’s credibility was at stake as an ACC member and Power 5 football program facing an upstart.

The Blue Devils had suffered enough frustrating losses with turnovers and inconsistent play wasting opportunities to beat Boston College, Virginia, Virginia Tech and N.C. State. They couldn’t afford a loss to an instate, Group of Five opponent playing only its eighth year of football.

The Blue Devils responded with more than a win. They dominated the scoreboard and had big plays on both sides of the ball.

“One of the great things about winning is it’s going to reinforce the quality of the practice,” Duke coach David Cutcliffe said. “They know where the emphasis has been. They see the result of the emphasis. Now they have to build on it.”

Mataeo Durant and Deon Jackson both had 100-yard games, scored and broke off a long run. Durant ran 12 times for 104 yards and two touchdowns with 60-yard gallop. Jackson carried 10 times for 101 yards without a loss and a 65-yard score. Waters broke off a 70-yard run for a TD to finish with 78.

Defensive end Chris Rumph II had three sacks for 21 yards, linebacker Shaka Heyward 12 tackles with a sack and two tackles for a loss.

On special teams, freshman safety Isaiah Fisher-Smith blocked punts twice. He’s has three in the last two games after recording his first one against N.C. State.

“We know the next half of the season is important to us,” Rumph said. “We wanted to start off on the right note. We had a lot of guys make plays. All over the field you could find guys that made plays. It wasn’t just me. It was a great team win and a great team effort.”

The Blue Devils scored on its second play of the game, Jackson’s 65-yard run, and 17 points in the first quarter. The 17-0 lead was their largest of the season.

The second possession ended with a punt after only one first down and an incomplete third-and-6 pass, but they scored with the ball the next two times.

The third possession was set up by a blocked punt recovered at the Charlotte 31-yard line. Duke scored in four plays on a 17-yarder to Darrell Harding Jr. and runs of 9 and 3 yards by Durant before Durant scored on a 2-yard pinball dive into the end zone.

The fourth possession was set up by a short, 36-yard punt to Duke’s 45 that Jontavis Robertson returned 21 yards to the Charlotte 34. Duke advanced the ball 26 yards before Chris Ham converted a 32-yard field goal.

POINTS ON THE BOARD

Cutcliffe spoke during the bye weekend and during game-week preparation about finishing drives. The Blue Devils’ were leaving points on the field with too many turnovers and red-zone failures.

This week there was only one turnover after 22 in the first six games. The interception was thrown by backup quarterback Gunnar Holmberg. Starter Chase Brice was 8-of-14 for 106 yards with one touchdown. He was sacked only once.

The Blue Devils had converted only 8-of-21 red-zone touchdown opportunities. Against Charlotte, they were seven for seven while settling for a field goal only one of the seven times. Chris Ham hit a 32-yarder with 2:01 left in the first quarter.

Cutcliffe also had been concerned about third-down conversions on both sides of the ball. The Blue Devils were only 3-of-7 against Charlotte, but they avoided third downs with big plays.

Duke is home again when it hosts North Carolina (4-2, 4-2 ACC) at noon Saturday at Wallace Wade. The Tar Heels last Saturday at Virginia, 44-41.