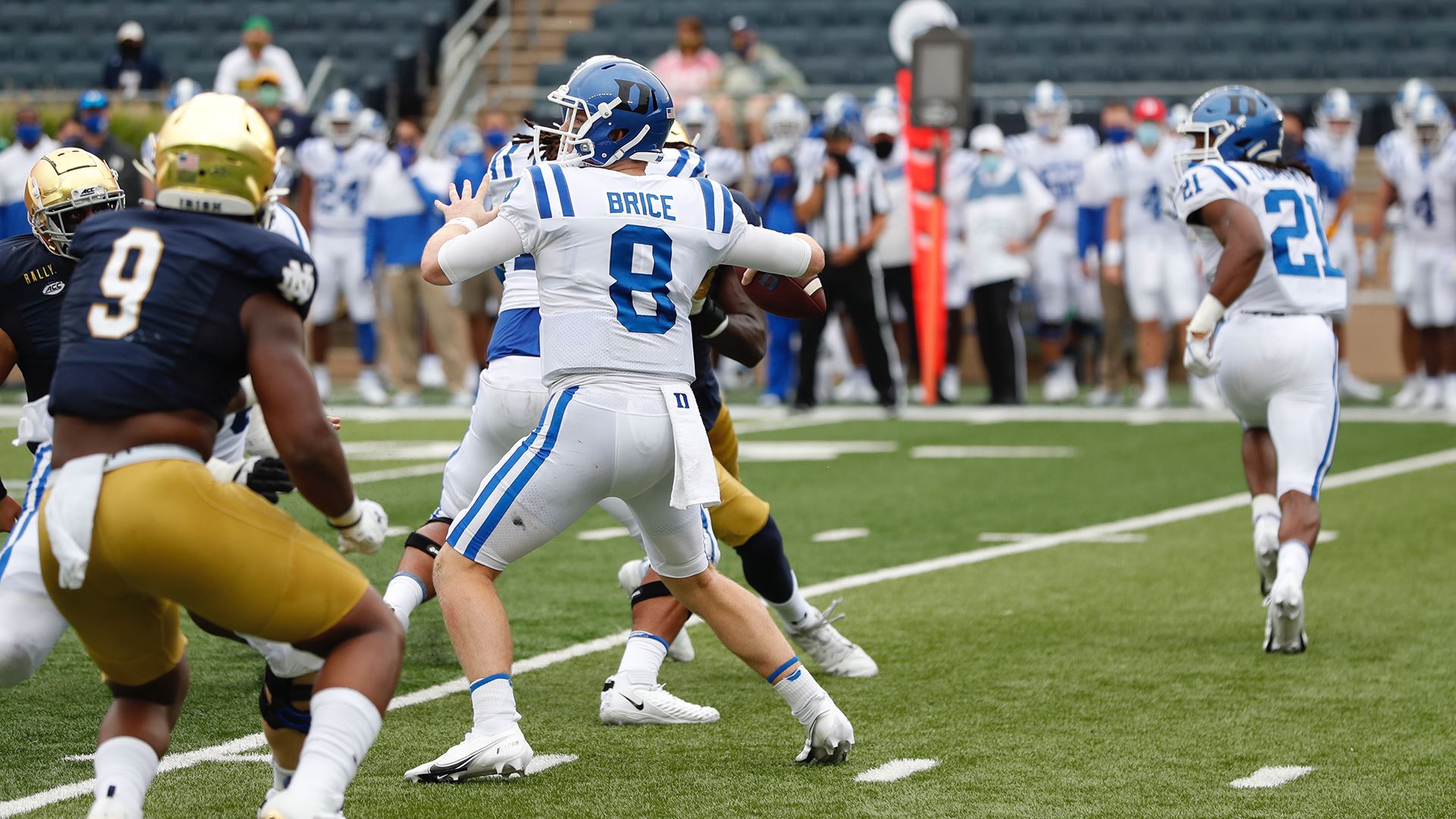 Duke is again 0-1 after opening the season against a Top 10 team, but the similarities to 2019 stop with the record as the Blue Devils prepare for their home opener at noon Saturday against Boston College.

Duke only stayed with No. 2 Alabama last season for a quarter in a 42-3 loss. This time the Blue Devils’ defense forced No. 10-ranked Notre Dame to resort to a fake punt. The Irish, an ACC member this season due to COVID-19 ripping up schedules, needed the trick play to jump start a 27-13 victory and avoid losing their first conference game in school history Saturday at Notre Dame Stadium.
A year ago, Duke only stayed with No. 2 Alabama for a quarter in a 42-3 loss. This time the Blue Devils’ defense forced No. 10-ranked Notre Dame to resort to a fake punt to jump start a 27-13 victory Saturday at Notre Dame Stadium.
“I don’t think it’s Notre Dame is not strong,” said head coach David Cutcliffe. “I think we’re a better team than a year ago.”
Against Alabama, you could have turned off the TV in the third quarter when Nick Saban’s team added three touchdowns to a 14-3 halftime lead. Duke-Notre Dame was a one-score game, with the Blue Devils trailing 17-13 into the fourth quarter, until the Irish mounted a 15-play, 83-yard touchdown drive with 10:58 left in the game.
Alabama outgained Duke 512 to 204 with 30 first downs to 11. Notre Dame’s edges were closer, 441 to 334 and 24 to 19. Quarterback Chase Brice, making is first start since high school as a Clemson grad transfer, was 20-of-37 for 259 yards with a rushing touchdown. Notre Dame’s fifth-year senior quarterback, Ian Book, was 19-of-31 for 261 with one TD and one interception.
This time Duke’s post-game comments weren’t about regrouping from a sobering performance. They were about how the Blue Devils measure up against the remainder of their schedule that doesn’t include Notre Dame’s NFL talent.
“I felt the O-line did a tremendous job throughout the game,” Brice said. “In certain situations, they knew we had to push the ball down the field and gave us some exotic looks that gave our O-line some trouble. But for the first 3 ½ quarters we were in striking distance.”
The defense recorded three sacks and two other tackles for a loss against Notre Dame’s offensive line that Cutcliffe judged to have five future NFL players.
“There were a lot of things to be proud of,” said defensive end Chris Rumpf II, who had five tackles. “The secondary did a tremendous job giving us time to get to the quarterback. He is a savvy and did a good job of moving around the pocket. It was 10-6 at halftime. We were fighting and scrapping the whole 60 minutes.”
The only remaining ranked opponent on the schedule at this point is No. 18 North Carolina (1-0), a 31-6 over Syracuse. The Tar Heels have a better quarterback than Notre Dame with NFL prospect Sam Howell, but not an overall more talented depth chart.
You didn’t have to study NFL draft projections to understand that. Enough was learned through commentary from Tony Dungy, the Pro Football Hall of Fame coach, who was in a new role as an NBC college analyst in the booth.
Notre Dame’s depth included redshirt freshman defensive end Isaiah Foskey coming off the bench – he was listed with Ovie Oghoufo as “or” for the second spot behind NFL draft prospect Daelin Hayes — to record a tackle for a 11.5 yard loss, a sack for 10 yards, one pass breakup up and two quarterback hurries.
“Yeah, some people would be happy that he would be their featured player,” said Notre Dame coach Brian Kelly, “and he’s a depth player for us. He’s an outstanding football player.”

Coach K at ease coaching as recruiting rolls on without him