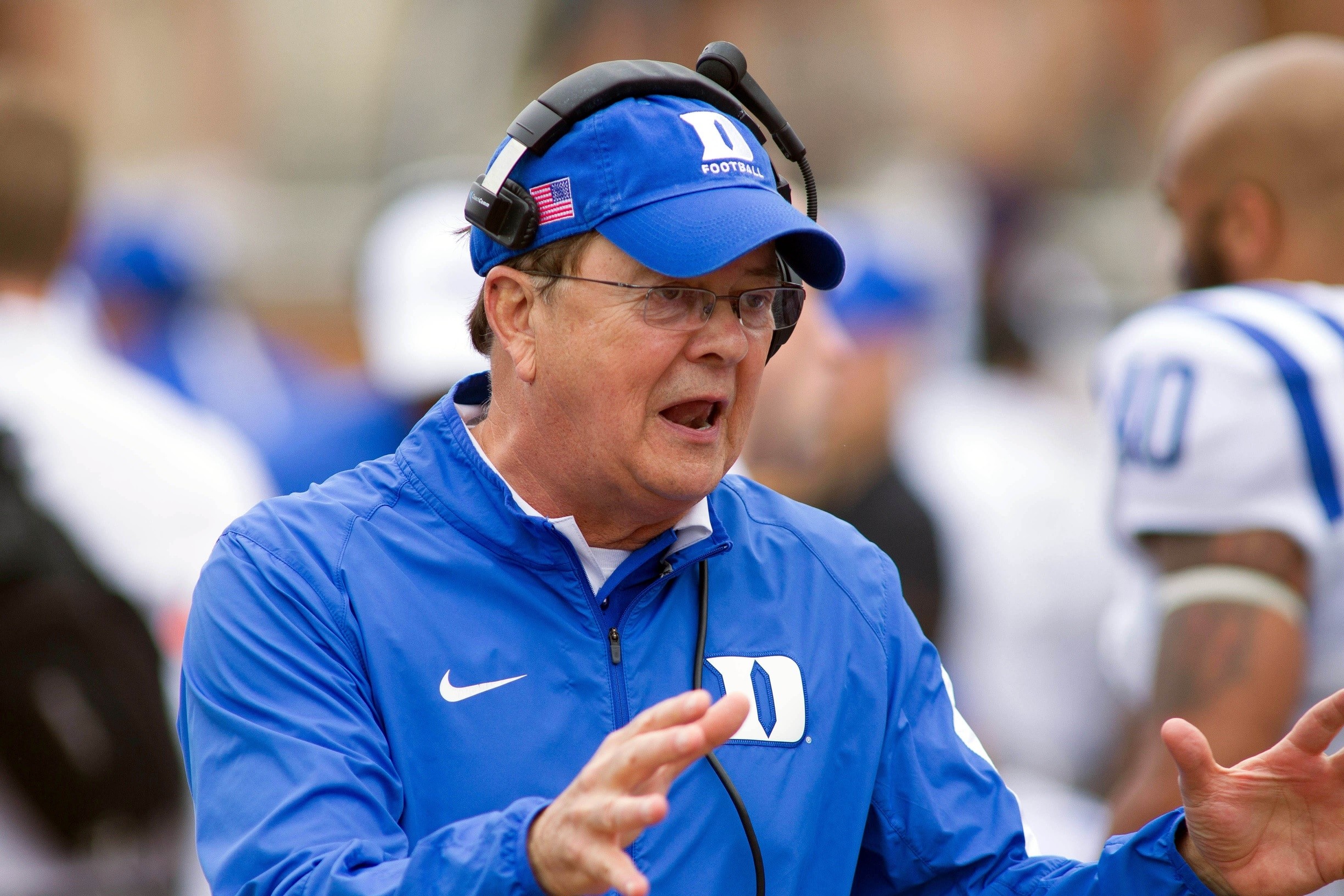 Poll voting can be misleading. That’s true of both the Associated Press ballots cast by writers and the USA Today tallies from the coaches.

In the past decade or so, Michigan has been the butt of overrated scoffs. The Wolverines brought it upon themselves with their 2007 season-opening loss at home to Appalachian State, but the they aren’t alone.

But sometimes the polls reveal results beyond a team ranked too high or too low. This Week 3 results (actually, only the second poll since the preseason due to the truncated opening weekend), Duke lost a football game by two touchdowns, 27-13 Saturday at Notre Dame, yet climbed from one vote in the USA Today preseason poll to 12 this week.

The writers left blank on their ballots Duke, which plays its home opener against Boston College, making its season debut, at noon Saturday at Wallace Wade Stadium.

But maybe the coaches voting for the Blue Devils think Notre Dame was ranked too low as a preseason No. 10. The Irish moved up to No. 7 this week in both polls.
“I had a number of coaches text me,” Duke coach David Cutcliffe said. “I think they saw a good football team in Duke. I think that’s legitimate. To stay there you have to win to get votes. To be considered a good football team you’ve got to win. I don’t think everybody realized the ability Notre Dame has. This Notre Dame team is better than a year ago. I don’t like coming close. I like playing well. We did play well, but we didn’t play well enough to win. I certainly think we earned consideration.”

For Duke, matching up with the Irish long enough to trail only 17-13 into the fourth quarter was an extreme contrast from a year ago. Duke lost to then-No. 2 Alabama in the season opener, 42-3, and then in the ninth week fell to then-No. 15 Notre Dame, 38-7.

Duke wasn’t overpowered up front with its improved size and experience in the offensive line. The Irish made big plays for losses, but throughout 60 minutes it wasn’t a mismatch. Duke scored first with a field goal for a 3-0 lead when quarterback Chase Brice connected with sophomore wide receiver Eli Pancol for a 55-yard gain to the 8-yard line.

Defensively, Notre Dame running back Kyren Williams had 205 all-purpose yards with 112 rushing and 93 receiving, but the Blue Devils forced three consecutive three-and-outs to open the game. Notre Dame’s initial first down wasn’t until the third play of the second quarter.

Duke has strong defensive ends with NFL prospects Chris Rumpf II and Victor Dimukeje, but the question was inside. Senior Derrick Tangelo (6-2, 310) and redshirt junior Ben Fry (6-2, 255) were stout against the run until later in the contest. Notre Dame ran at them early; Tangelo finished with five tackles and Frye three.

The Irish were about to punt three plays later, but punter J. Bramblett, a high school quarterback, cut back inside from the defensive stringing out the run to gain first down yardage. That sparked the Irish to finish a 12-play, 96-yard drive for a 7-3 lead with 10:39 remaining in the first half.
Notre Dame finished with 73 plays for 441 yards total offense to Duke with 67 and 334.

“Our locker room was a blend of disappointment in South Bend,” Cutcliffe said, “but also understanding we are a different team than we were a year ago – and we were.”

* * *
I invite you to follow me on Twitter @shanny4055
Tom Shanahan, Author: Raye of Light http://tinyurl.com/knsqtqu
— Book on Michigan State’s leading role in the integration of college football. It explains Duffy Daugherty’s untold pioneering role and debunks myths that steered recognition away from him to Bear Bryant.
http://shanahan.report/a/the-case-for-duffy-and-medal-of-freedom
Don’t believe the myths at Duffy Daugherty’s expense about Bear Bryant’s motivation to play the 1970 USC-Alabama game or myths about the Charlie Thornhill-for-Joe Namath trade. Bear Bryant knew nothing about black talent in the South while he dragged his feet on segregation.
http://www.shanahan.report/a/forty-four-underground-railroad-legacy-facts
http://shanahan.report/a/myths-that-grew-out-of-1970-alabama-game-with-usc
http://shanahan.report/a/mystery-solved-in-thornhill-and-namath-myth
David Maraniss, Pulitzer Prize winner and biographer; “History writes people out of the story. It’s our job to write them back in.”
Raye of Light: Jimmy Raye, Duffy Daugherty, The Integration of College Football, and the 1965-66 Michigan State Spartans
https://www.augustpublications.com/