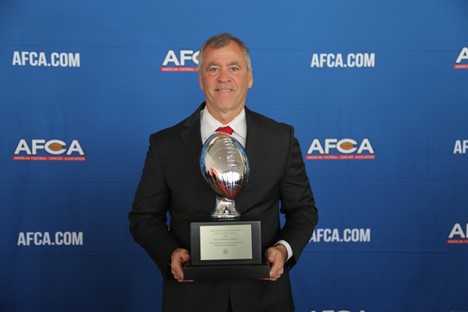 This is the press release from the National Football Foundation. As an NFF member, I’m proud to post on my website an honor for Tony Annese at Ferris State, my hometown’s college.

“Each year at the AFCA convention, the NFF presents the championship trophies to the coaches who have taken their teams to the pinnacle of success,” said NFF President & CEO Steve Hatchell. “It is fitting that we present the trophies in front of their peers, the very people who know the commitment, dedication and effort that goes into winning a national championship. We are extremely pleased to join with AFCA Executive Director Todd Berry to continue this tradition of honoring the nation’s most successful coaches each year at the convention.”

NCAA Division II – Asa S. Bushnell Trophy
Ferris State University (MI) – Coach Tony Annese
Head coach Tony Annese and No. 1 Ferris State (14-1) notched back-to-back national titles Dec. 17 with a 41-14 win over No. 2 Colorado School of Mines (13-3) in the NCAA Division II National Championship game at McKinney ISD Stadium in Texas. The win marked the school’s second football national title, and Annese, heading the Bulldogs for 11 seasons, has tallied an overall record of 115-17, including 55-3 during the past four seasons. The Bulldogs totaled 432 yards of offense in the game while holding one of the nation’s highest scoring offensive units to only 212 total yards. Quarterback Carson Gulker notched three rushing touchdowns, and quarterback Mylik Mitchell completed 14-of-18 throws for 170 total yards. Slot wide receiver Marcus Taylor led the Bulldogs on the ground with 103 yards rushing on 13 carries. On defense, safety Cyntell Williams had six tackles while defensive tackle Jordan Jones had five stops, including two sacks and 2.5 tackles for loss.

Steelers’ Bill Nunn gains his due, joining Donnie Shell and other HBCU players in Pro Football Hall of Fame