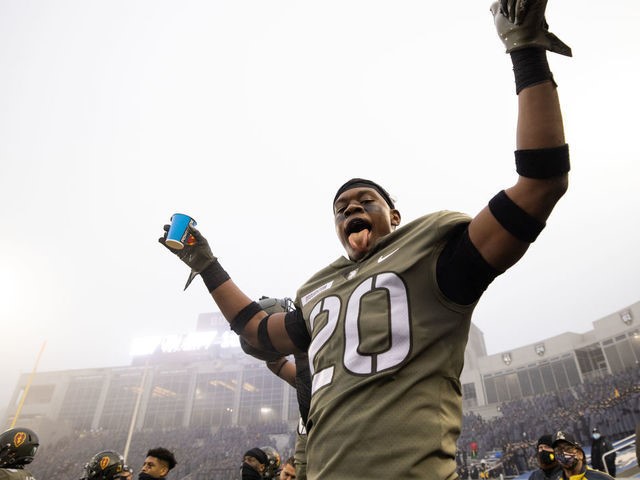 One of the secrets of military service academy athletic programs is the academic instructors aren’t professors. They aren’t on campus to write papers, publish books, appear on TV and radio talk shows and earn advanced degrees that enhance their department chair’s portfolio.

Foremost, they’re teachers on a campus of only 4,000. The instructors are committed to supporting and guiding future officers whether they’re at West Point, Annapolis or Colorado Springs. For the football players, they say practice is the easiest part of their day.

Army junior defensive back Marquel Broughton cited two instructors, in particular, who have helped him grow and overcome a tough family background. He arrived at the U.S. Military Academy Prep School in 2018 and West Point in 2019 unsure of his future. He was a rough ball of clay.

“It’s amazing what you can do,” Broughton says, “when you have people supporting you and pushing you.”

The 5-foot-10, 205-pounder from Lawrenceville (Ga.) Mountain View was elected one of four team captains this season along with three seniors. He’s the first junior voted a team captain in six years on a roster of players recruited to become leaders.

Broughton met Col. Todd Woodruff at the prep school, a necessary waystation to improve some recruits’ academics for admission to West Point. It’s also a lonely time, especially if they’re unfamiliar with a military lifestyle.

“He’s just family,” Broughton said. “He took me in at the prep school. He and his wife, Elizabeth, had me over and really embraced me. To this day they’re basically my family away from home.”

“He’s a mentor to me,” Broughton said. “My freshman year after the (2019) Army-Navy Game, when we got blown out, he came up to me in the locker room. He said, ‘You are a leader. I’ve seen you have leadership skills. I’ve seen them in you. I’m challenging you to step up and lead this team for the upcoming season.’ That meant a lot to me. I took it wholeheartedly. I put the pedal to the floor and kept going.”

As a sophomore in 2020, Broughton broke into the starting lineup for all 12 games, helping the Black Knights to a 9-3 record. They beat Air Force and Navy to capture the Commander-in-Chief’s Trophy for the third time in four years. He led the team in solo tackles with 40 and was fourth overall with 67.

Broughton credits his 40 solo stops to his wrestling background, having placed third in the state in high school in his weight class. Football linemen are known for translating wrestling techniques with their hands and leverage in the trenches, but Broughton plays in open space. He explained the leverage he’s learned still has been valuable. It helps him secure the ball carrier and how to use his body to take them down.

“Wrestling is a gritty sport,” Broughton said. “It pushed me to be tougher. I know how to push my body.”

Broughton is still driving himself, despite last year’s progress.

He has already matched his 2020 interception total with two, he’s tied for second on the team lead in solo tackles (six) and is fifth overall (11) through Army’s 3-0 start. The Black Knights seek their first 4-0 start since 1996 – when they opened 9-0 — against Miami of Ohio at noon ET Saturday at Michie Stadium.

“What worked for me last year was finding my comfort zone,” Broughton said. “Not playing nervous and doing the things I know I can do. Another thing that assisted me was the teammates around me. Cedrick Cunningham (a senior starting safety) brought me up and showed me the ropes. That was the biggest thing for me last year.

“I made plays last year, yes, but I also had too many assignments, for me, that I missed. This season I wanted to work on my eyes and things like that so I don’t have missed assignments. Know my job and do my job. That’s something I’m keyed on for the season.”

That focus paid off in the second game, a 38-35 win over Western Kentucky.

The Hilltoppers took the game-opening kickoff and quickly moved down field with three first downs to the Army 36-yard line. Broughton ended the drive when he read a pass play to the right side of the field from underneath the pattern. He jumped on the interception while crossing to the middle of the field.

“That was a perfect example of what I mean about how I want to play this year,” Broughton said.

Broughton has long demonstrated inner strength to overcome adversity. When he was young, his father, Antonio Broughton, had been incarcerated and was later killed. His mother, Frederica Daniels, battled personal demons she eventually overcame. When West Point recruited Broughton, she encouraged him to start down the path of a life-changing trajectory as an officer in the diversity of the U.S. Army.

Broughton also credited support from his wrestling coach as a youth and in high school, Michael Blowbliss. Broughton began to support himself with a busy routine of school, football, wrestling and a job at Subway. It’s not the same as a a cadet crawling through rough terrain in heat or cold, but Broughton was prepared to complete a full day.

“I had to grow up faster than others,” he said. “I was already mature in ways. I was able handle discipline through school and working at Subway. How I got through it here is I found a new family. I talk to other players and other cadets.”

One teammate Broughton bonded with quickly was Braheam Murphy, a junior slotback also off to a fast start this season with two touchdown receptions. Their pasts share much in common. Murphy’s mother died when he was 5 and he bounced between relatives until his football coach at Charlotte (N.C.) Harding University, Sam Greiner, took him in with his young family. Greiner pushed Murphy toward his life-changing trajectory at West Point.

Broughton, like Murphy, is far from home. But they don’t feel alone at West Point.

My appearance on the Adam Gold Show