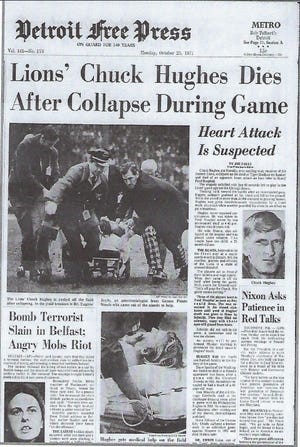 The NFL muddled through plans on what to do next after Buffalo Bills safety Damar Hamlin collapsed on the field with a heart attack and was rushed to University of Cincinnati Hospital. If the NFL had a plan in place based on a past tragedy in 1971, the focus could have been solely on prayers for Hamlin.

Instead, the NFL has only itself to blame. A plan based on the death of Detroit Lions receiver Chuck Hughes in 1971 could have prevented speculation that mounted throughout the week the league was slow to cancel the game and slower to announce a plan to deal with seeding the playoffs.

There was a precedent – lessons to be learned – despite comments from ESPN’s on-air crew, during the time play was suspended, that the NFL was in unchartered waters.

— In 1971, Detroit Lions wide receiver Chuck Hughes collapsed on the field with a heart attack. Trainers and doctors rushed to Hughes. They did the best the could trying to revive Hughes before placing his lifeless body on a stretcher. He rushed by ambulance to Henry Ford Hospital three miles away.

— Then, with only 1:02 remaining in the contest, the players’ concern for Hughes was overridden by the natural rhythm of the game. The players, without a voice to express, huddled up. Detroit quarterback Greg Landry threw an incomplete fourth-down pass. The Bears took possession and kneeled out the clock for a 28-23 victory.

— This was an era when players had few rights in an authoritarian league. Such awareness for the mental health of the players dealing with a tragedy was decades into the future. Such progress took pressure from the NFL Players Association in collective bargaining agreements.

— Thankfully, we’ve evolved since then. In 2023, there was common a sentiment now among players, media and fans that that Bills-Bengals’ game shouldn’t have continued. And it didn’t, although there was confusion as to why it took an hour for the NFL to announce the decision.

I texted a legendary Lions player about his memories of the 1971 tragedy. He was a revered player to any kid who grew up in Michigan a Lions fans, like me.

I asked him to compare the emotions of the Bears-Lions players as they saw Hughes taken from the field and then resumed play with what took place in the Bills-Bengals game in Cincinnati. He didn’t want to be named, feeling the focus should be on prayers for Hamlin rather than interjecting another outside voice. But he texted back with an answer explaining the emotions running through the Lions. If they had a choice, they didn’t want to play.

“It was identical to losing a member your immediate family, a brother! We went into the locker room and prayed for Chuck. Like I’m doing now for Damar.”

DIFFERENT BUT THE SAME

There were different circumstances, but it’s not apples and oranges when both cases are about a life-and-death situation.

— There was only 1:02 to play in Detroit. At Cincinnati, it was still the first half, but everyone was left to wonder what was taking so long to call off the game.

— The Bears-Lions game was only the sixth week of the season, so playoff implications had several weeks to firm up. For what it’s worth, the Lions were a 1970 playoff team and entered the Chicago game with a 4-1 record. Detroit finished 7-6-1.

— The Bears-Lions telecast was viewed by only a regional audience blacked out in Detroit, according to the NFL policies of the era. And there were no national post-game cable shows to go over what happened.

— The Bills-Bengals game was played before a national audience with far more cameras available to portray the emotions of the players on the field. What happened continued to be discussed on ESPN’s post-game show since there was no policy in place to cite. Other news networks broke into their regular schedule to report the news.

So, yes, a far larger and enlightened audience reacted. But I saw the 1971 game while a kid among other Lions fans watching on TV elsewhere in the state. Michael Wilbon said on his TV show “Pardon the Interruption” he watched the game as a kid among Bears fans in Chicago.

Enough people saw the game for lessons to be learned by the adults in the NFL hierarchy. We learned. Why not expect the same of the NFL?

But the denouement was the NFL punted on a learning from the unchartered waters of a tragic 1971 game. And ultimately suffered the consequences in 2023. There was unnecessary confusion about what to do next and critical speculation on what took the NFL so long to reach a decision.