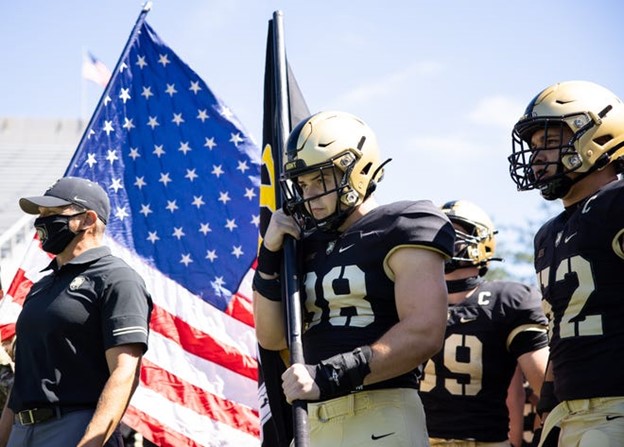 This story is better off left as a family secret, but Army West Point senior Fabrice Voyne voluntarily spilled the beans in a Zoom interview session.

The Black Knights’ outside linebacker claimed his older brother Sava Voyne, a Naval Academy graduate, switches allegiances for the Army-Navy Game – at least he has during Fabrice’s West Point football career, that is.

“He roots for me,” Fabrice said. “He’s doesn’t care as much about rooting for his alma mater that week. He wants us to do well. It’s a funny situation.”

With the 123rd Army-Navy Game upon us at 3 p.m. Saturday in Philadelphia, Fabrice’s comment needed to be relayed to Lt. j.g. Sava Voyne, a pilot stationed at Naval Air Station Whidbey Island near Seattle. Sava played on Navy’s rugby team, not football, but his loyalty remains anchored to Annapolis despite his brother’s comments.

The family split over the academies came about when Army was first to offer Fabrice. He loved his West Point recruiting trip and committed over offers from BYU, Utah State and Ivy League schools. He didn’t wait to see if Navy or Air Force were interested.

“I saw how (Annapolis) shaped my brother as a person,” Fabrice said. “I think from a young age, I understood there was a great opportunity to come here (West Point). As I got older in the school and the football program, I can say more and more how special it is. That’s something taken for granted, but you can really see what it does for you and your peers. I’m from California — I’m far from home — but I’m blessed to go through the program and this school.”

The brothers’ commitment to five years military service upon graduation spells out their patriotism, but it runs deeper than that. It dates to the 9/11 terrorist attacks.

Their older brother, Dino Voyne, who was from their father Don Voyne’s first wife and thus 10-plus years older, was a Michigan football walk-on prospect in August, 2001. But a month later – after the 9/11 attacks – he left school to enlist in the U.S. Marines.

Dino finished his military service as an infantry officer upon earning a degree from the University of San Diego while he was still enlisted. Sava said Dino’s experiences resulted in the younger brothers’ interest in the service academies. Sava graduated from Xavier Prep in La Quinta, California, with admission letters from Army, Navy and USC.

“We idolized our brother growing up for being a Marine,” Sava said. “We thought the military was cool for that reason. I thought the Navy was best for me.”

Sava and Fabrice played football at Xavier Prep in the Coachella Valley desert resort town. Their father, who died two years ago, was a USC letterman in 1957.

Fabrice finished his Xavier Prep career in 2018 as a wide receiver and safety. He totaled 121 catches for 1,795 yards and 14 touchdowns and 155 tackles with three sacks and an interception.

The demands of the service academy make it a tough recruiting battle for coaches to secure a commitment from prospects who possess a civilian Division I school offer. But Voyne’s family military background gave West Point an advantage.

“I felt West Point was the school that called me,” Fabrice said, “and I wanted to challenge myself.”

But as far as playing time, he faced a hurdle most Army recruits don’t face. He plays outside linebacker, the same position as Andre Carter II, a third-team All-American pick in 2021. Carter, a 6-foot-7, 260-pounder, has been projected as high as an NFL first-round pick in 2023. He set a West Point season record a year ago with 15.5. sacks.

“I look up to Andre and have total respect for him,” Fabrice said. “He works his butt off every day. With a guy like that you not only respect his body of work, you want to be able to fill in for him the best you can if he goes down. Really, he has made me a better player. I’ve seen his work ethic, and it’s inspiring. I plan to apply it to the rest of my life.”

Carter has been plagued by nagging injuries in 2022, including missing the Colgate and Louisiana Monroe games. Voyne (6-2, 220) took Carter’s starting spot in both games won by the Black Knights. Against Colgate, he recorded a tackle for a loss. Against Monroe he finished with five tackles (four solo), a half-sack and 1.5 tackles for a loss. Voyne has played in 11 games, compiling 11 total tackles 3.5 for a loss and 1.5 for a sack.

Fabrice’s attended his first Army-Navy Game as a high school senior recruit in 2018 while Sava was at Annapolis. That year Sava’s Navy company participated in the marathon run of bringing a game ball to Lincoln Financial Field. Since Sava wasn’t part of the “March On” – a time honored event when the Brigade of Midshipmen and Corps of Cadets take turns assembling in the field — he was able to meet up with Fabrice and their father in the tailgate parking lot.

“Their father was so proud of his boys for their commitment to our country,” said Mark Campbell, Xavier Prep’s assistant principal and athletic director. “He and his wife Sally raised two remarkable young men.”

Sally and Sava are both attending Fabrice’s final Army-Navy Game.

“My family comes every year,” Fabrice said. “They come a long way for the game.”

Just don’t ask Sava who is rooting for.

Ol’ Roy is bringing Maui to the North Carolina mountains