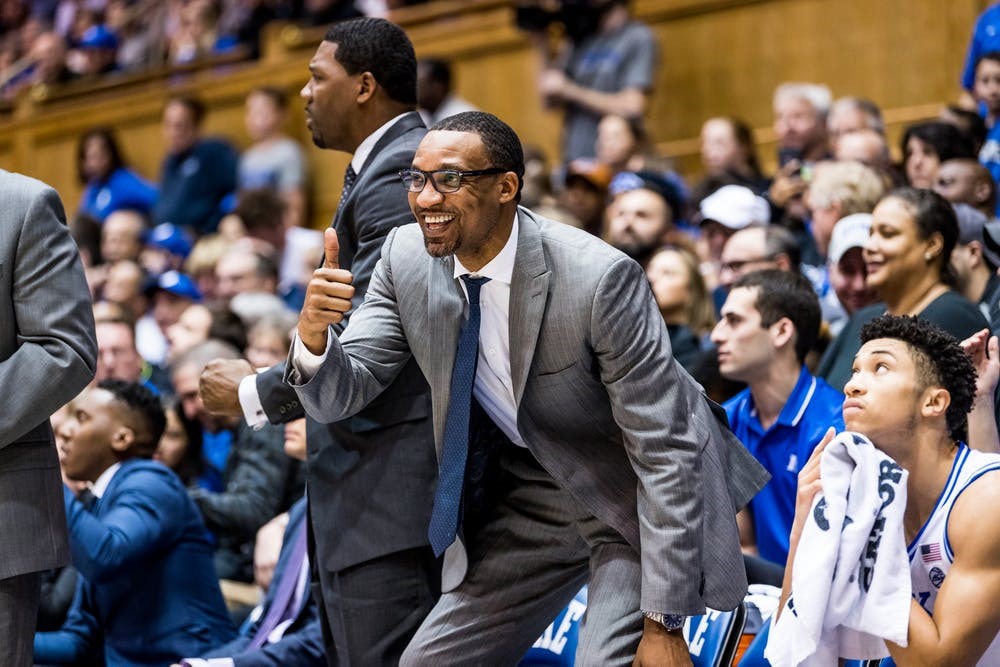 In 1996, he departed his St. Louis home for Durham as an incoming Duke basketball recruit. He was a wide-eyed kid behind the wheel of a sputtering late-model Dodge Integra.

“It was so old,” said Carrawell, grinning and frowning at the same time. “It was so huge. It was red. I couldn’t sneak anywhere. They saw me all the time. It was like a limo. I hated that car. Bad memories, bad memories.”

The upgrade in vehicles comes with wise life choices as time marches on.

The first one was accepting Duke coach Mike Krzyzewski’s scholarship offer. The versatile 6-foot-6, 220-pounder who could play all five positions when called upon, finished his career as the 2000 ACC Player of the Year.

He earned his Duke degree; played professionally overseas; and then he paid his bench dues upon entering the coaching profession. His latest offer from Coach K was a promotion last summer to associate head coach.

Cameron Indoor Stadium looks the same as it did in 1996 – other than hanging three more NCAA title banners, 2001, 2010and 2015, and some comfort renovations – but it’s a different campus.

When Duke promoted Nina King from assistant athletic director last summer to succeed Kevin White upon his official retirement date of Sept. 1, she was the first person of color to hold the position. She is one of only three Black women athletic directors in the nation.

Time marches on, hopefully for the better.

“It’s been exciting to see, to be part of so to speak,” Carrawell said. “Man, ’96 was a long time ago. When I came in, you’d think of this school as all white, but it wasn’t all white. We had a lot of diversity.

“Now, you fast forward. I’ve got to give credit to Dr. White for his inclusion of at hiring African-Americans and other minorities in the athletic department during his tenure. The hiring of Nina was incredible to see her get the opportunity. Not because she’s a Black woman but because she’s the most qualified among other candidates. She can do the job at a high level and that to me was why she was hired.”

Duke will always have a reputation as an elite school for white students. One of its most notorious alums during President Donald Trump’s four years in office was Stephen Miller, the voice behind Trump’s far-right and anti-immigration policies.

But when Coach K recruited Carrawell in 1996, the school’s elitist image wasn’t an elephant in the room. Carrawell said Krzyzewski brought up the importance of diversity in a progressive society. It was more than a recruiting pitch.

That same year Coach K was laying the foundation to the Emily K Center. The education facility near campus, named for his mother, provides services to underprivileged Durham youth. It has grown from 38 students its first year to more than 2,000.

Carrawell joined that Coach K culture along with Duke’s winning basketball tradition. All three of Coach K’s assistants are former players – Jon Scheyer, the head coach-in-waiting upon Krzyzewski’s retirement at the end of the season, and Nolan Smith along with Carrawell.

Carrawell played seven years professionally overseas before he returned to campus as a Duke graduate assistant. Next, he was a video coordinator and assistant strength coach, outreach coordinator and women’s basketball assistant.

He left in 2011 for three years as an NBA G-League assistant. Then he joined Marquette’s staff (2014-18) under former Duke teammate Steve Wojciechowski.

Coach K brought Carrawell back to Duke in 2018 as an assistant coach. Krzyzewski, a retired U.S. Army captain with a coaching-tree boughs for branches, doesn’t hand out jobs and promotions like J.J. Redick three-pointers.

“I have to be ready to do more,” Carrawell said. “I have the bigs this year so it’s different for me, because for the first three years Jon and I have had the perimeter. Then Jon is kind of overseeing it and he’s getting in there as well on both ends.

“He’ll come down and he may see something with the bigs and go at it and do the same as well with Nolan. With practice and getting the guys in and working them out, it’s been a group effort. Nolan has been responsible for the perimeter.”

Carrawell, who turns 44 next month, laughed when he caught himself saying “in my day – I’m the old guy now” as he made a point that guys stayed two or three years if not four compared to now.