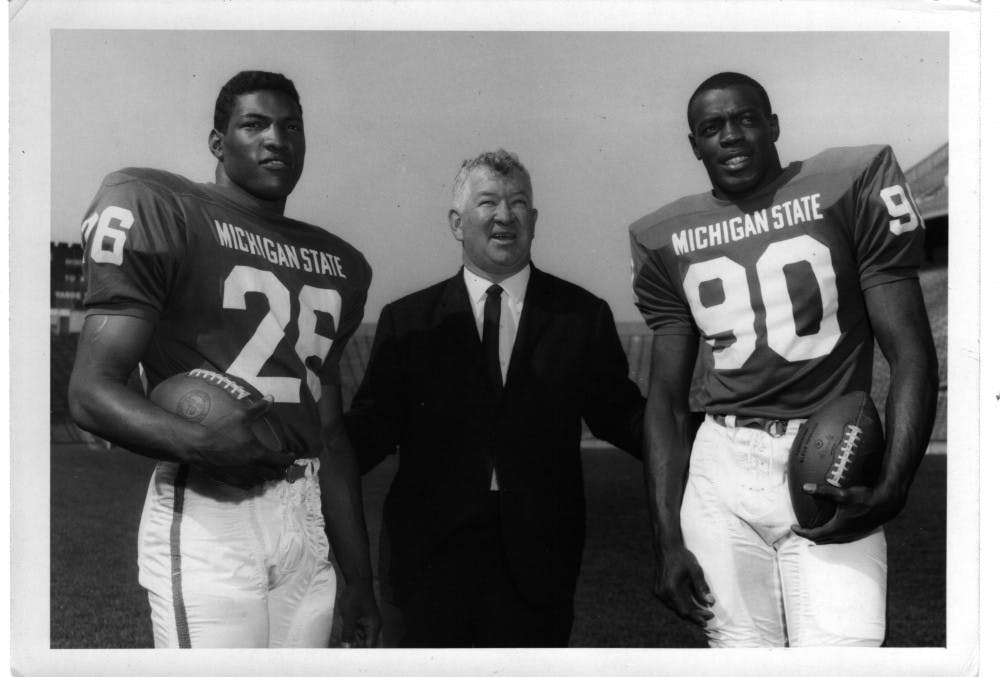 What if a movie with a doctored script depicted Michigan State College Football Hall of Fame coach Duffy Daugherty using the N-word? Unaware viewers may take that as an accepted portrayal of Daugherty.

That’s the concern of Jimmy Raye and Michigan State teammates who played on Daugherty’s ground-breaking 1960s teams. They were college football’s first fully integrated rosters while winning 1965 and 1966 national titles.

They’ve seen the script for a movie in production, “Black Spartans.” One of their objections was Daugherty depicted using the N-word. The players hired the Los Angeles law firm, Early, Sullivan, Wright, Gizer and McRae, to file a cease-and-desist order.

Wrote Devin McRae in the September filing: “Based upon the three versions of the full script that have been shared with the players and their families, the defamatory content is overwhelming, not only harmful and offensive to the individuals and the University as an institution, but also harmful to the Country’s interest and accurate and truthful retelling these significant cultural and racial historical events.”

Michigan State University, through Brian Quinn, the School’s Vice-President of Legal Affairs and General Counsel, also informed the movie producers that the university won’t cooperate with the film and licensing requests.

History’s failure to properly document the Underground Railroad has left open the door to distort Daugherty’s story. The problem is, Daugherty retired after the 1972 season. He died in 1987. Most fans under 60 years old don’t know about his leadership defying racism.

Daugherty, it should be known, was the OPPOSITE of Syracuse coach Ben Schwartzwalder, who initially didn’t want Jim Brown to join his program in 1953 as a Black freshman recruit. Brown played at Syracuse from 1954 to 1956.

Did the producers of “Black Spartans” assume Daugherty was enlightened overnight by the success of the 1965 and 1966 teams? Maybe they guessed he was no different from Schwartzwalder by taking a page from the 2008 movie, “The Express: The Ernie Davis Story.” Schwartzwalder is depicted, accurately, apologizing to Jim Brown with the hope he’ll help him recruit Davis, who became the first Black Heisman Trophy winner in 1961.

By the 1950s and 1960s, Michigan State had established its reputation as a North Star — a place of opportunity for Black athletes. They were seen on TV scoring touchdowns at the 1954 Rose Bowl – All-American picks Leroy Bolden and Ellis Duckett — and 1956 Rose Bowl – stars Clarence Peaks and John Lewis.

The Spartans’ reputation was particularly striking among Black fans in the segregated South. Black high school coaches began contacting Daugherty, telling him, “I’ve got a player for you. I trust you with him.” This marked the birth of the Underground Railroad. The pundits who label Daugherty as recruiting southern Black athletes just to win football games — such as network analyst Charles Davis in a 2019 ESPN series on college football — have got it all wrong.

Sports movies have a long history of twisting the narrative to sell tickets. There should be a price to pay, but, unfortunately, sometimes they profit from it.

HBO’s “Winning Time: The Rise of the Lakers Dynasty” was a lucrative hit, even though the series departed wildly from Jeff Pearlman’s book, “Showtime.”

Lakers legend Jerry West filed a defamatory lawsuit against HBO. Former Lakers trainer Gary Vitti was so upset with the depictions of West he walked away from a $15,000 consulting fee to continue to work with the series.

But, sometimes, there is a price to pay.

An example is the ESPN movie version of John Feinstein’s bestselling book, “A Season on the Brink.” The film, rejected by viewers, sits quietly in the archives collecting dust. Feinstein voiced problems with the movie before it aired and in his 2011 memoir, “One on One.”

“Except for one fictional scene with (Steve) Alford – there were plenty of those in the movie — the entire movie was the crazed Knight: throwing chairs and screaming at officials and players and the president of Indiana and assistant coaches and anyone else who happened to wander into the path of Brian Dennehy, who played Knight about as well as he could be played, given the quality of script and the directing.”

Knight is a complicated story to tell, which made Feinstein’s ability to untangle it and portray Knight’s many good sides a popular book. But ESPN chose to the easier story to tell with Knight depicted only as a cartoon character.

College football integration is a complicated story and that has allowed simple versions to capture the college football lore narrative. As a consequence, Daugherty, his teams and true 1960s true pioneers at other schools have been overshadowed by simple accounts casting Alabama coach Bear Bryant, who dragged his feet on integration into the 1970s, as John Wayne leading the calvary. Those narratives are told in films by HBO, “Breaking the Huddle; 2008” Showtime, “Against the Tide, 2013” and ESPN’s 150th college football anniversary series, 2019.

Those films rely on myths and fiction surrounding the 1970 USC-Alabama game that weren’t crafted until the 1990s. They were designed to obfuscate Alabama coach Bear Bryant dragging his feet on integration into the 1970s and to embellish USC’s otherwise poor record recruiting Black athletes until the late 1960s.

“But for Duffy Daugherty, it wasn’t about him trying to be Mr. Progressive and Abraham Lincoln, Duffy was about winning football games.”

In a profound irony, that summation fits Bear Bryant, who finally gave in to integration in 1970s. But viewers watching ESPN come away thinking Daugherty was the shallow guy.

USC coach John McKay was criticized by the Los Angeles Black community for his lack of Black players. He began recruiting more in the late 1960s — after Daugherty set the model with his 1960s teams highlighted by the 1965 and 1966 national titles.

The result was schools and coaches around the nation began to follow Daugherty’s example. Daugherty’s legacy has been overlooked for too long. Depicting him using the N-word adds defamatory insult to injury.

As Clinton Jones said of the N-word’s use at Michigan State:

“The only person who called me (the N-word) was George Webster.”

If a movie makes the big screen with Duffy using the N-word, walk out. If it makes the small screen, turn the channel.

— Tom Shanahan earned first place from the Football Writers Association of America for Enterprise Story on the 1962 Rose Bowl and segregation. He is the author of Raye of Light, a book on Michigan State’s leading role in college football integration under Duffy Daugherty in the 1960s.