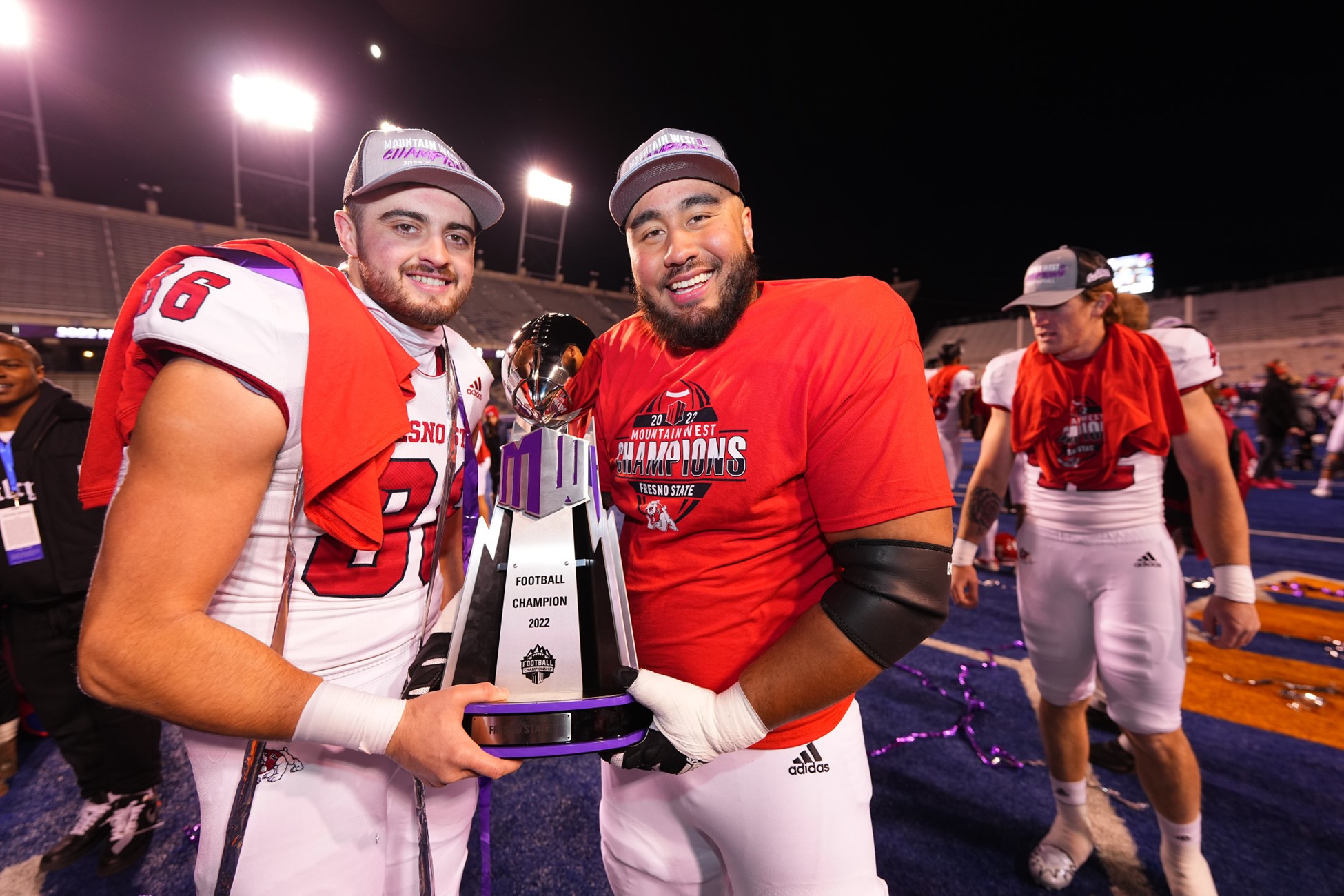 Fresno State’s Jacob Isaia wraps up a bittersweet 2022 season with his Mountain West champion teammates in the Jimmy Kimmell LA Bowl on Dec. 17 at SoFi Stadium. Three days later, he travels down the coast to Oceanside to bury his father, Sale Isaia.

The sudden death at age 50 of his father — an Oceanside High prep All-American, UCLA four-year letterman and NFL veteran — was on November 23 from a heart attack. Jacob spoke at length the next day on Thanksgiving with his mother, Amy, and his grandfather, Bob Apisa, college football’s first Samoan All-American pick as a Michigan State fullback (1965 and 1966).

The decision was to keep the heartbreaking news among the family and for Jacob to play the regular-season finale one day later, Friday, November 26.

“It’s what he would have wanted me to do,” Jacob said of his father. “He would have said, ‘Get through this Mountain West season. Have fun with the guys on the team and play hard.’ I’ve been talking constantly to Grandpa Bob. My dad looked up to him. This is what my dad would have really wanted me to do.”

“He played with a heavy heart,” Apisa said. “He was very despondent, and I’ve been trying to talk him through the holidays. This has put a damper on everything, but he has been playing the best he can. I’m so very, very proud of him.”

A week later, Isaia again took the field when the Bulldogs traveled to Boise State for the MWC title game. Fresno avenged a 40-20 regular-season loss with a 28-16 victory to propel the Bulldogs (9-4) into their bowl game against Washington State (7-5).

“He took the advice of his loved ones to celebrate the fellowship and brotherhood he’s forged with his team,” said Joe Salavea, another Samoan legend and NFL veteran from Oceanside who was close to Sale. “We don’t control time. His dad would have been proud of him to continue the journey. It will never take away from the loss of his father, but Jacob knows his dad got to see him having a great season.”

The 2022 journey started with Isaia leaving Michigan State after four seasons through the transfer portal. His playing time had been limited to special teams and some backup duty. He had earned his degree in Food Industry Management and enrolled at Fresno State as a graduate student. When asked to recount his thought process to leave Michigan State and choose Fresno State, Jacob chuckled and said, “That will take a while.”

“It came down to wanting a change of scenery after four years,” he said. “I had fun at Michigan State. I made a lot of lifelong friends. I loved Coach (Mel) Tucker and Coach Kap (Chris Kapilovic, assistant head coach/offensive line coach). Coach Kap helped me a lot. I understand and love football even more because of him.

“Michigan State’s coaches understood where I was going and what I was trying to do. I got something more out of Michigan State than a degree. I made lifelong friends and memories.”

Isaia committed to the Spartans in 2018 under then-coach Mark Dantonio as a 3-star prospect out of Bishop Gorman in Las Vegas, where his mother Amy Hitzman is an eye doctor. But since he was born in Honolulu and his varsity high school career began at Iolani in Hawaii, he represented the closest link to Michigan State College Football Hall of Fame coach Duffy Daugherty’s famed Hawaiian Pipeline in nearly a half-century.

Daugherty recruited 10 players out of Hawaii from 1955 to 1972 long before the Islands became a hotbed of high school prospects. But after he retired, the only Michigan State coach to try to re-tap the Hawaiian Pipeline was Muddy Waters, who signed Carter Kamana out of Honolulu Kamehameha in 1980.

Isaia redshirted in 2018 and played sparingly in 2019. The 2020 season, reduced by the COVID pandemic to seven games, and 2021 seasons were under Tucker.

He said he didn’t know what to expect when he entered transfer portal. After hitting the send button on entering his name publicly in the transfer portal, he and some friends went to eat at an Outback Restaurant in East Lansing. He had barely taken his first bite when his phone started buzzing.

The first call was from Fresno State offensive line coach Saga Tuitele. He introduced himself and then quickly inquired how many other schools Isaia had heard from so far.

“You’re the first one, coach,” recalled Isaia, chucking at the memory.

The phone continued ringing, though. Isaia narrowed his choices to a Hawaii homecoming and, oddly enough, the Bulldogs’ bowl opponent, Washington State.

On his Fresno State recruiting trip, his father, mother and stepfather, Brett Hitzman, were with him just as they were at Michigan State along with his grandfather. Sale Isaia like Dantonio and encouraged Jacob’s commitment to Michigan State. On the Fresno State trip, they were with head coach Jeff Tedford when Sale called his family into a room.

“He said, ‘This feels like the right place,’” Jacob recalled.

The success of the 2022 season also has led Isaia to decide to take advantage of the NCAA COVID exemption year. He’s returning for a sixth year of eligibility in 2023.

But his father’s memory is not all that he’s carrying into the final 2022 game. For the last six years he’s been playing for the memory of his father’s best friend, Pulu Poumele. Jacob’s mother picked his first name and his father chose Pulu for the middle name. Pulu Poumele as was a Samoan star at Oceanside who played in college at Arizona and in the NFL. Poumele was playing a pickup basketball game while coaching football at Oceanside’s crosstown El Camino High when he died suddenly of a heart attack in 2016. He was 44.

“Jacob has two great examples to follow,” Salavea said. “He had already experienced what it feels like to wear someone’s legacy.”

Salavea, a veteran coach who is now at Miami as the Hurricanes’ associate head coach/defensive line, is working to juggle his duties around national signing day on Wednesday and transfer portal players shopping for new schools to attend the funeral. Oceanside has been home to many Samoans because of Camp Pendleton, a U.S. Marine base. In World War II, American Samoa was a vital link to supplying U.S. troops in the South Pacific. Many Samoans served in the Marines and Navy.

“Oceanside is like the islands away from the islands for Samoans,” said Salavea, who came from American Samoa speaking limited English to live with an aunt while in high school. “Sale came from a great family. He always made you feel welcome. Jacob is a tough kid to play through this.”