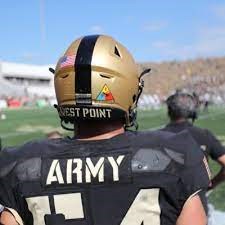 The first two years for West Point Cadets are the hardest in many ways. For a football player who isn’t seeing the field, those same two seasons aren’t what they signed up for as a high school star.

That scenario seemingly made Army linebacker Camden O’Gara a candidate to move on before returning this season as a junior.  O’Gara, after all, comes from a football family used to playing.

His grandfather Vince Costello played 12 NFL seasons, 10 with the Cleveland Browns at the end of the Paul Brown era and two more with the New York Giants. His father, Guy, played at Kansas; his oldest brother, Griffin, at Dayton; and another older brother, Cooper, at Concordia in Ann Arbor, Michigan.

At West Point, cadets affirm as their first day of school as juniors, meaning they’re bound to two more years of school followed by five serving as officer upon graduation. Plenty of cadets, athletes and non-athletes, choose not to return.

But O’Gara has done more than return as the Black Knights (0-2) seek their first win against Villanova (2-0), a Football Championship Subdivision member, when the team meet at noon Saturday at Michie Stadium.

He was quick to make an impact in the second game in a backup role. He contributed five tackles, 1.5 tackles for a loss and a half-sack for four yards, although the Black Knights lost to UTSA 41-38 in overtime last week in their home opener.

“What kept me at West Point is definitely the people in m my company, the corps, my teammates and the coaches,” O’Gara said. “I’ve never been around a coaching staff like we have. My brothers played college football and didn’t have the best experience that some people have. Every coach I’ve had at West Point has been helpful. They care about me as a person and developing me as a leader. All my friends are great people looking out for each other. No one is selfish. They’re trying to make the team the best the can.”

O’Gara, a 6-foot, 227-pounder, played at Wyoming High in Cincinnati. Serving in the military wasn’t on his mind until he was recruited. His other offers were from Football Championship Subdivision schools such as Dayton, Butler, Colgate and Morehead State.

“I was attracted to West Point as a 40-year decision – not a four-year decision,” he said. “The coaches talked about life after football. I love the Army now. I’m excited to be an officer in the United States Army. I’m invested in the school. West Point is one of the top academic schools in the nation.”

O’Gara, a direct admit, didn’t see playing time as a freshman. As a sophomore, he was on the scout team. He said he took snaps on special teams in two games, but he didn’t take a defensive snap until this season.

But once the 2021 season ended, his satisfaction with his overall West Point experience overrode any disappointment he wasn’t playing. He set upon a path of the taking improvement steps he needed to make in spring football and the summer.

“The strength staff here has been awesome,” O’Gara said. “They’ve pushed me every summer to get faster and stronger.”

He also felt the support of his teammates in the linebacker room. O’Gara backs up junior Leo Lowin at one inside linebacker spot, while Kalvyn Crummie starts at the other inside linebacker spot with Peyton Hampton listed backup. Spencer Jones also is in the mix. Lowin is second on the team in tackles (19) to safety Marquel Broughton (20) and Crummie fourth (11).

“The guys around me were helping me learn the play book and getting me ready to back up Leo whenever he needs a break. All the guys my in my room were work together to get each other right. Whoever gets in, gets in. Whoever makes the play, makes the play. Were always working together to be the best room we can be.”

Villanova is a FBC member, but the Wildcats have been explosive in their two games. Villanova defeated two FBC schools, Lehigh, 45-17, and Long Island University, 38-21.