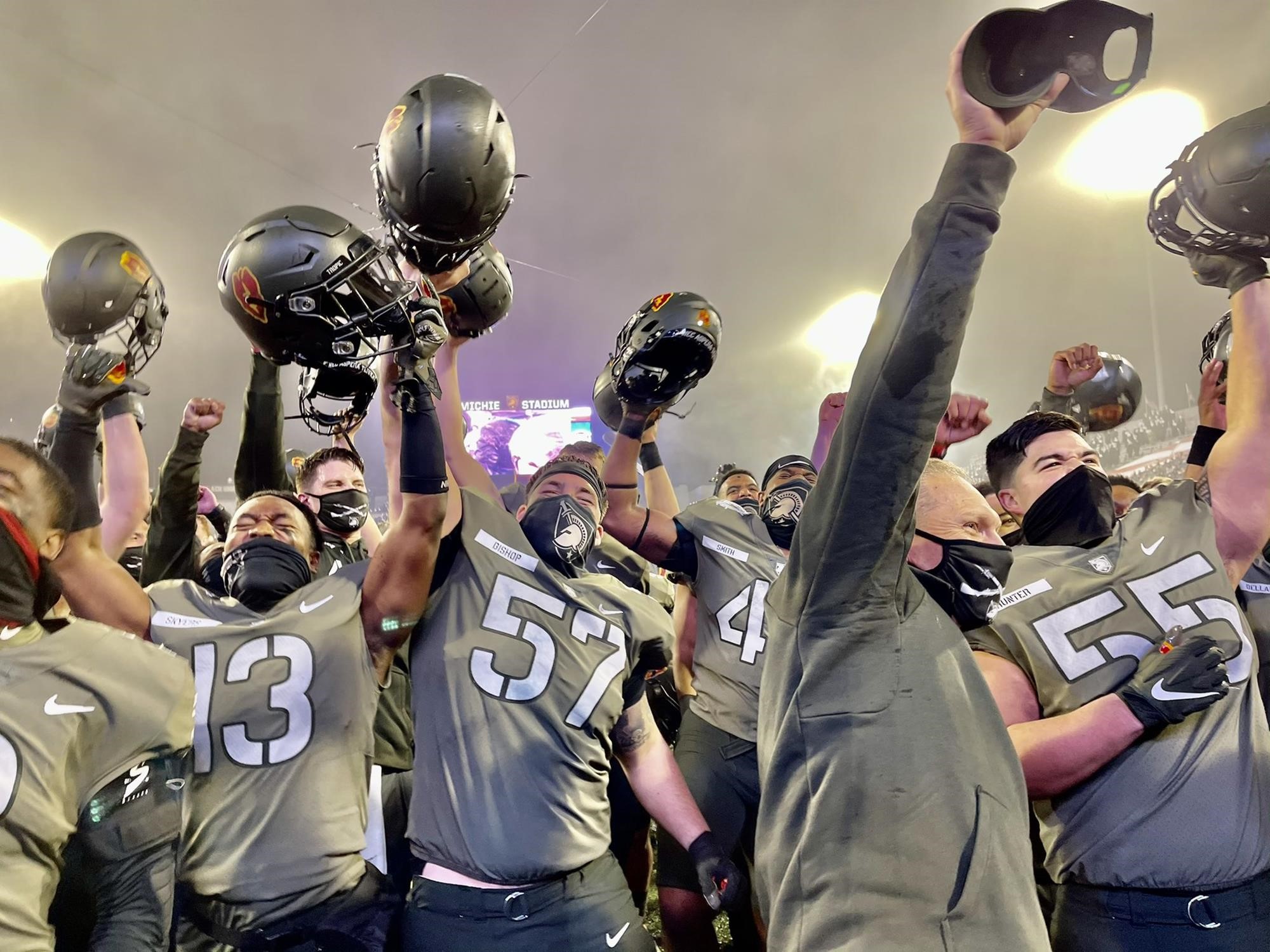 PHOTO: Army coach Jeff Monken leads his players celebrating their 2015 win over Navy with the Corps of Cadets, West Point’s students in the stands.

Now that college football’s rivalry weekend has come and gone – with various talking heads having claimed Michigan-Ohio State or another traditional end-of-year showdown is the greatest rivalry in sports – let’s get down to the genuine article.

If you don’t understand Army-Navy is the greatest rivalry in college sports, you’ve never been to the game. I learned that fact when I went to my first one in 2011. It started as a bucket list item. I’ve been to four more since then.

You can’t see it through TV – modern sport filters a focus on rankings, 5-star recruits and projected first-round draft picks – but the experience of the Army-Navy Game casts a shadow over other rivalries. A Grand Canyon of emotions separates the height of winning and the depth of losing the game.

ABC’s Wild World of Sports, a 1960s and 1970s series, famously captured “the Thrill of Victory” – athletes celebrating — and “the Agony of Defeat” – winter Olympians crashing end over end as a catchphrase with Jim McKay’s iconic voiceover introduction.

The imagery worked for the purposes of video on the screen, but it doesn’t match the emotional heights of victory and the depths of defeat surrounding the Army-Navy Game.

“I don’t know if there is any way to compare it,” explained Army coach Jeff Monken in a Monday Zoom call when asked to compare the rivalry’s thrill of victory verses the agony of defeat. “Winning it is a joy, an exhilarating feeling to win that game. It’s such a big rivalry with what it means to the men and women that wear the United State Army uniform, the men and women we represent and the pride we have in representing them well on that day in winning that game and giving them bragging rights over their sister service.

“On the other end, losing that game is just devastating. It’ a gut punch that lasts a whole year. When a team ends up on losing end of this game, it can’t wait to play it again and do everything it can to get rid of the feeling.”

Monken knows the rivalry from both sides, but he didn’t appreciate the agony of defeat until he took over as Army’s head coach, in 2014, to rebuild the program.

“I’ve been on both sides of it,” Monken said. “I don’t like being on the losing side. That’s the agony of defeat. And winning it is incredible to have that feeling to celebrate with the team and the Corps of Cadets. It’s the greatest rivalry in sports. A lot of people cheering for other teams may not agree, but I don’t know there is any rivalry quite like ours.”

The rivalry is enough by itself, but Army (8-3) also can clinch the Commander-in-Chief’s Trophy after having defeated Air Force earlier this year. Navy (3-8) also lost to Air Force, but the cliché “throw out the records when these teams meet” is reality in the Army-Navy Game.

The coaches and programs know each other well. Monken and Navy head coach Ken Niumatalolo were assistants together at Navy. One of Navy’s wins was over Central Florida (8-4), Midshipmen threw a scare into No. 3-ranked Cincinnati (12-0) before falling 27-20 and Navy has won two of its last four games, beating Tulsa and Temple.

“There a tough football team, a rugged physical football team,” Monken said. ‘They always have been. Kenny will have his team ready. I know the culture Kenny has bult there and who the kids are in that locker room. They care a lot about each other and play hard for each other — just as our guys do.

“That allows them to be competitive against everybody they’ve played. They beat a talented team like Central Florida and had a chance to win the game or at least tie it against Cincinnati. They gave Cincinnati as tough a game as anybody has this year. They’ve steadily improved. They’re playing really good football right now.”

In the end, players in regional or conference rivalries go their separate ways after the game. The Army and Navy players join the same team with their five-year commitment to serve in the military.