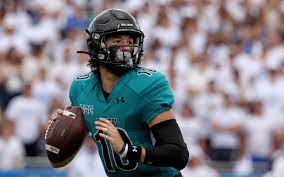 West Point Football Report is a reader-supported publication. To receive new posts and support my work, consider becoming a free or paid subscriber.

Coastal Carolina is a relative newcomer on the college football scene, but if you’re a college athlete, the upstart from the Sun Belt Conference located the shores of South Carolina has been around long enough.

The Chanticleers – a mascot adaptation taken from their older sister school, the South Carolina Gamecocks – began playing football in 2003 as a Football Championship Subdivision member. They moved up to the Football Bowl Subdivision in 2017, and they’re coming off back-to-back 11-win seasons.

“They’ve had a several great years,” Ballard said. “Their coaching staff has done a great job getting players. They’re in Myrtle Beach, and they have a cool stadium and field. From what I hear, the atmosphere is awesome. They’ve done a great job of building the place up. They’re getting great players and with great coaches to coach them up, they’ve had success.”

The 2020 team (11-1) ended the year ranked No. 14 in the nation with wins over Kansas and Brigham Young. In the 2021 season (11-2), Coastal climbed as high as No. 14 before its losses to Louisiana, the Sun Belt West and overall champion, and Appalachian State, the Sun Belt East champion, dropped them out of the Top 25.

“We definitely respect them,” Ballard said. “They’ve been on the scene long enough for us to notice and respect them. They have our full attention. We’re excited to go down their play and try to execute and do our best.”

But what to expect from this year’s Coastal Carolina is a different question.

The Chanticleers return only seven starters, four on offense, three on defense. One of the offensive starters, though, is junior quarterback Grayson McCall. He excels at getting his offensive in and out of a spread offense designed to pass or exploit the RPO, run-pass-option plays.

McCall, a 6-foot-3, 216-pounder, completed 176 of 241 passes (73.0 percent) for 2,873 yards, 27 touchdowns and only three interceptions. Many of the completions are short passes or dump offs, but they’re designed to find open field. He also is adept at drawing the safeties to the line of scrimmage and then throwing over their heads.

There was speculation McCall would enter the transfer portal to play on a bigger stage based on his success and lack of returning starters, but he has said he never considered leaving the program.

Gravette was a backup to Isaiah Likely, the team’s second-leading receiver who was a Baltimore Ravens sixth-round draft pick. Pinckney, who is from Greenwood, S.C., is a transfer from Georgia State. He was limited by injuries last year, finishing with 27 catches for 311 yards and one touchdown.

“For them, the tight end went on to the NFL and the tight end (Gravette) behind him is in the same mold,” Woody said. “I don’t know if he’s an NFL guy — that’s still to be determined — but he’s still got a skill set that allows them to do the things they want offensively.

“They lost a really good receiver (Javion Heiligh, 66 receptions, 1,128 yards, seven touchdowns), but they got a transfer from Georgia State who is really good. Sam Pinckney is a long guy who makes 50-50 balls tend to go in the offensive favor. They’ve got good guys coming back. How quickly they gel, that remains to be seen.”

Army’s defense faces its own challenges replacing lost starters, although there are six back on the defensive side of the ball. Inside linebacker Leo Lowin, a junior, has some starting experience, but he will be playing alongside a new starter, sophomore Kalvyn Crummie (6-1, 240). The senior emerged atop the depth chart head coach Jeff Monken released on Tuesday.

“(Coastal Carolina) is sort of like — we’ve got new guys we’re putting in our unit,” Woody said. “If we’re gelling and hitting on all cylinders, look out. But we’ve also had practice where see we need more work. We’re going to get there. Our plan is to get there before this ball game. Whatever happens. we’ll work to get better.”