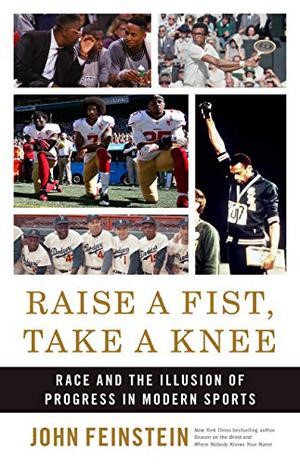 John Feinstein’s 44th book, “Raise and Fist, Take a Knee” examines progress that still needs to be made understanding racism in American sports.

Jackie Robinson’s 1972 autobiography, published within a week of his 1972 death, was titled, “I Never had it Made.”

The gifted athlete — a four-sport star at UCLA – challenged American racism by breaking the Major League Baseball color line in 1947 with the Brooklyn Dodgers. Then he used his platform the remainder of his iconic life fighting as a Civil Rights advocate.

Robinson’s talent made it look easy, but as an African-American his deeper story illustrated it was hard every step of the way.

John Feinstein’s latest book, “Raise a Fist, Take a Knee,” is a 21st-century version of “I Never had it Made” encompassing many athletes. The title suggests Tommy Smith and John Carlos (Raise a Fist) and Colin Kapernick (Take a Knee) never had it made, but there are far more names that will surprise the average fan. They also faced unfair obstacles to achieve success and fame.

If you consider only their championships, you’d think it all came easily. It didn’t. Robinson’s book was about one extraordinary man. Feinstein’s book is about how common racism is as a hurdle for Black coaches and athletes.

Consider this quote from the book:

Most white Americans would brush off that quote as whining from a Black activist.

Well, the above two paragraphs of quotes were stated by “America’s Coach” – Tony Dungy.

Everybody likes Tony Dungy. How can you not? If he feels that way, let’s hope the Americans that don’t accept systemic racism exists will take another look. A good way to do that is reading Feinstein’s book.

Feinstein points out Thompson, Williams and colleague Kevin Blackistone, an African-American, expressed their gratitude a white writer took on the project. Sadly, they understand the same words from a Black writer would be dismissed as unfounded complaining.

Michigan State fans will appreciate Feinstein including Jimmy Raye’s story in his book. Raye was a pioneer as both a Black quarterback and Black coach at the college and NFL levels.

Michigan State coach Duffy Daugherty recruited him out of segregated Fayetteville, N.C., aboard his 1960s Underground Railroad, college football’s first fully integrated rosters. Raye was the South’s first Black quarterback to win a national on the 1965 and 1966 teams.

And why not? A similar resume was plenty for Steve Spurrier, the 1966 Heisman winner, to become a head coach in college and the NFL. And Spurrier is just one name.

But Raye never got his chance, including from his own alma mater.

I remember spotting a photo of the 49ers staff in 1977 on Raye’s wall in his study in his Pinehurst home while writing “Raye of Light: Jimmy Raye, Duffy Daugherty, the 1965-66 Michigan State Spartans and the integration of college football.”

I commented sardonically, “I don’t see many Black guys in that photo.”

Raye, referencing his stints with other teams in the league, “there are a lot of photos like that one.”

Bieniemy may still get his chance to be a head coach. Jimmy Raye never did.

You’ll raise your awareness if you take a seat and read “Raise a Fist, Take a Knee.”

Feinstein also addresses how frequently the Black coaches or athletes are stopped for DWB — Driving While Black. The probable cause was nothing more than they can afford a nice car and live in a nice neighborhood.

In 2008, I was writing a story on University of San Diego quarterback Josh Johnson — now with the New York Jets — as a finalist for the Walter Payton Award for the top Football Championship Subdivision Player of the Year (Joe Flacco won in 2008). The story angle was to have my old friend Archie Amerson, a San Diegan who won in 1996 while playing for Northern Arizona, bring his trophy to USC’s practice and to meet Johnson.

In 2008, Amerson was back home living in San Diego, retired from a successful career in the Canadian Football League.

Practice finished but Amerson hadn’t shown up. Finally, he caught up with us, explaining he had been delayed. Amerson, driving a BMW, had been pulled over — DWB.

His look suggested frustration, but his voice also didn’t sound as if it was the first time.