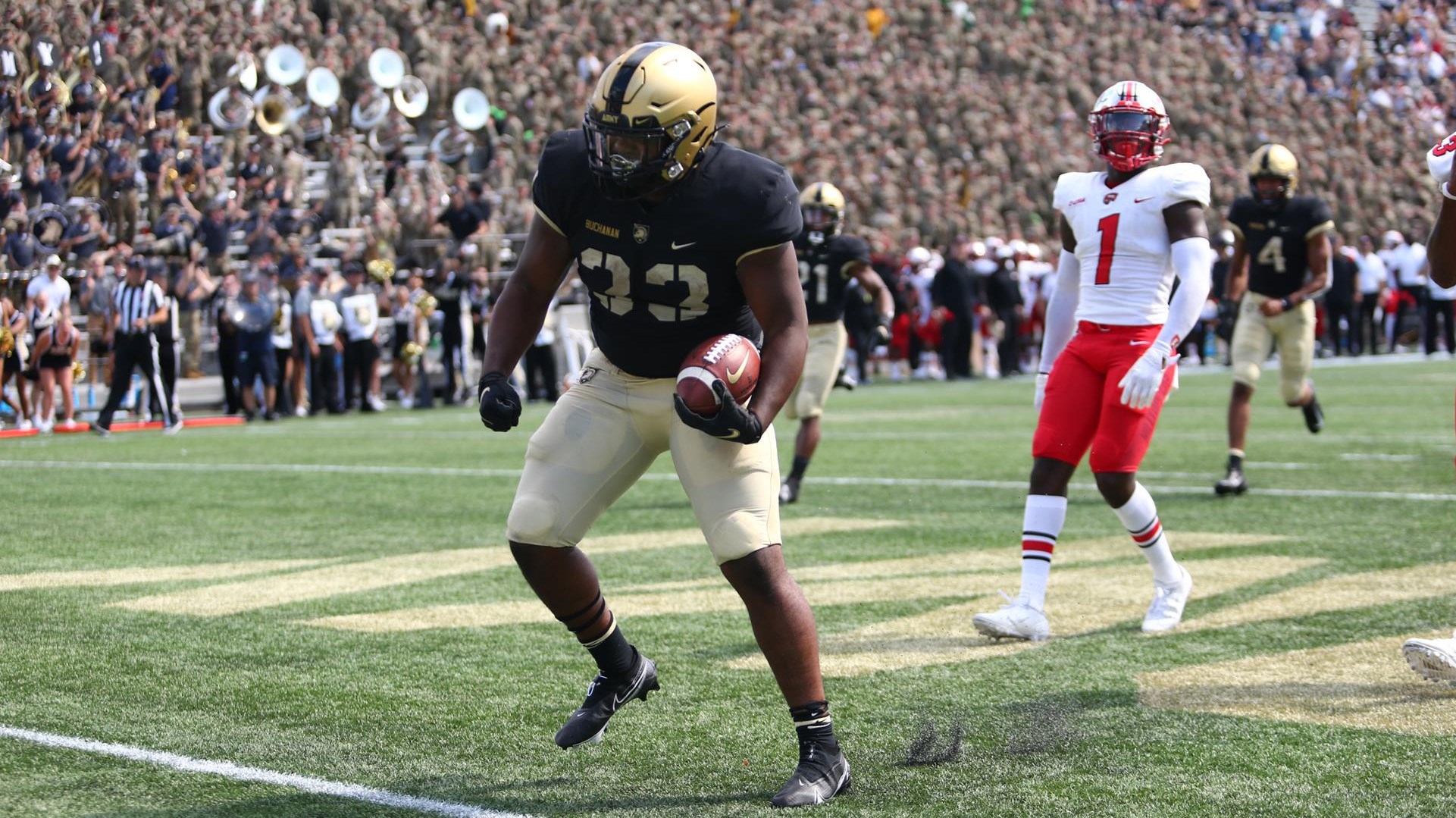 Army West Point considers itself America’s team with future leaders. My “West Point Report” provides features on the Black Knights with the hope you’ll sign up for a subscription. All funds, 100 percent, will be donated to the Wounded Warriors Project through my 501-(c)(3), Books for Sparty.

“Where have you gone, Joe DiMaggio?”

The Yankees legend, who was very much alive, was befuddled by the lyrics until Simon later explained to him the idea he meant to convey was, “Where have the heroes gone?”

Army West Point fullback Jakobi Buchanan, a 6-foot junior fullback whose weight varies between 260 and 285 pounds, wasn’t trying to write a deep song questioning society when he was recruited out of Chaminade Prep in St. Louis, Missouri. But he had good reason to wonder, where were the big fullbacks? They were no longer utilized in the modern college football game of one-back spread offenses.

“Where have you gone Craig ‘Ironhead’ Heyward?”

Heyward was a 5-11, 280-pound All-American fullback pick and 1987 Heisman Trophy finalist at the University of Pittsburgh. He played 11 seasons in the NFL until his death from cancer at age 39 in 2006.

“Ironhead” thrived on a bygone style of football Buchanan desired to play, and he realized through the recruiting process Army’s triple-option was the best fit for a guy who wasn’t afraid to commit to the challenge of a service academy. Navy and Air Force are traditionally triple-option schools, but Army remains the most fully committed to the roots of a pounding offense with quarterback under center, a fullback and two slotbacks.

“You don’t see bigger guys like us (Army fullbacks) anywhere else in the country who are able to run the ball,” Buchanan said. “It’s something I didn’t see anywhere else.”

Big as Buchanan is, he has stepped into the role as smoothly as an M1 Abrams Tank crossing the desert. Last season, Buchanan rushed 136 times for 504 yards and 12 touchdowns. He hasn’t been stopped behind the line scrimmage in his college career through 266 carries, 1,006 yards and 18 touchdowns.

“Ironhead” would be proud.

Army’s other two jumbo fullbacks are junior Tyson Riley (6-2, 255) and sophomore A.J. Williams (6-0, 233). But Buchanan, who admits to having played at 285 pounds last year, tip the scales into another category similar to Heyward.

Buchanan’s weight also separates him from his teammates in more ways than the scale. He reported to fall camp without losing weight that Army players typically experience while fulfilling their summer military training. Fall camp be about putting back on the weight as well as preparing for the season.

“It’s feels good to be back,” Buchanan said about the start of fall camp on West Point’s campus. “Summertime is hectic with school and summer workouts but we’re into the fall and now it’s only football. It’s a great time of the year.

“I’m probably one of the few guys who never had to worry about maintaining weight. I started last season about 260, and I finished around 285. I play at a wide range of weights. This year I want to stay in 265 and 275 range.”

Simply talking about his weight also separates Buchanan. Many big guys are too sensitive to answer questions about their fluctuating playing weight, especially if it translates to diminished production.

Buchanan says he’s noticed more power at the upper weights and doesn’t believe there has been a loss of quickness. He added, though, as a sign of maturity, he plans to be more conscious this season of his weight and its overall impact.

But his primary focus has been on becoming both a better blocker for his teammates and better at reading holes his teammates open. If he reads blocks quicker, he thinks he can find more open running room. Last year, his long run was 26 yards. In 2020, it was 40. He wants more of those type runs.

Army head coach Jeff Monken and offensive coordinator Brent Davis identified Buchanan as an ideal fit for their punishing ground game, but in addition they’ve developed him into more than a bruiser.

“He’s gotten better as a complete player and playing without the football,” Davis said. “It’s a matter of continuing to work on his consistency as far as his eyes and his action keys with some the schemes he hasn’t run as much. It’s getting reps at the right things. He doesn’t need reps on fourth-and-1. He knows how to do that.

“But there are other facets of his game he hasn’t had enough live reps. It’s fining tuning, getting him in good condition, which he’s doing a good job of, and just being Jakobi. He’s physical guy who runs with a good pad level who falls forward and has great feet. He’s a fantastic football player.”

There’s another aspect of Buchanan’s game that shouldn’t be taken for granted. Some high school coaches wouldn’t seen past Buchanan’s size as a lineman, but his coaches continued to play him in the backfield.

“When coaches handed him the ball, they saw production,” Davis said. “That’s what I imagine they saw. … ‘I don’t care how big he is. That’s an asset. Nobody can tackle him.’ That’s probably what happened. Those are things if I was his high school coach that I would have seen.”