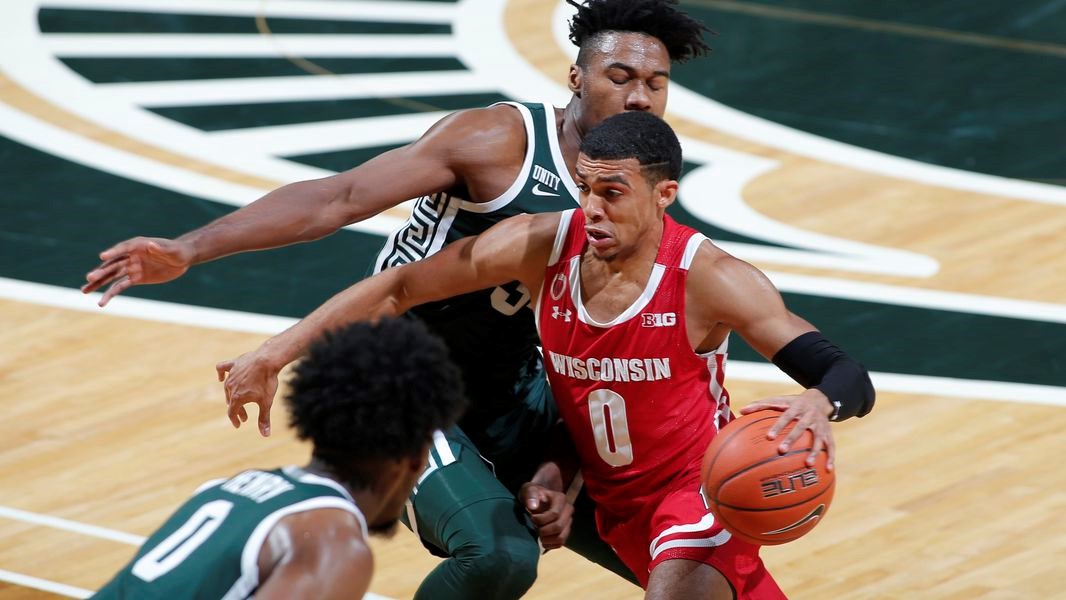 We’re barely a couple weeks into the Big Ten season, but Michigan State coach Tom Izzo’s sounded as if he was ready to name Wisconsin’s D’Mitrick Travis the Big Ten Player of the Year.

Izzo called him “The Maestro” of a senior-laden team, intending to draw a comparison to Leonard Bernstein, not to Bob Cobb, Jerry Seinfeld’s Tuscany foil.

Wisconsin’s “Maestro” was lightly recruited out of high school and is six years removed from his senior season at Huber Heights (Ohio) Wayne, but he dominated. He scored 29 points to lead the No. 9-ranked Badgers past No. 12 Michigan State 85-76 Friday at the Breslin Center in the first of four Christmas Day Big Ten games.

Izzo believes it can take him to the NBA.

“I know one thing, I got a lot of NBA buddies,” he said. ‘And if anybody calls me and talks to me about him there going to be rave reviews. I’ve known him since he was little. But the way he’s grown each and every year the last three years, a tribute to him, their staff and his family.”

Player-of-the-Year consideration might have sounded preposterous as recently as only a couple weeks ago, but it seemed more credible by the end of the night. Unranked Minnesota pulled off a 102-95 overtime upset of No. 4 Iowa and its preseason Big Ten Player of the Year, Luka Garza.

Wisconsin, No. 19 Michigan and unranked Northwestern are 2-0 and atop the Big Ten standings. In addition to Michigan State, Wisconsin and Iowa, the ranked Big Ten teams with a loss already in conference play include No. 11 Rutgers (2-1), No. 18 Illinois (2-1) and No. 23 Ohio State (1-1).

By March, Garza or another one of the preseason first-team All-Big Ten choices – which didn’t include Trice – likely eventually rises to the top.

But in the era of the one-and-done NBA player and social media that tends to attract the same players like lemmings to the same schools — most notably Duke, Kentucky and Kansas — Trice is a refreshing story in what might turn out to be an unpredictable season.

Gonzaga, a college power but not a blue blood, is the No. 1 team in the nation led by a Jalen Suggs, a freshman projected as the No. 2 pick in the NBA draft. He’s behind another freshman, Cade Cunningham, playing at Oklahoma State.

A year ago, the No. 1 pick of the 2020 NBA draft was Anthony Edwards of Georgia.

Trice is listed as a 6-foot, 184-pound redshirt senior, but he’s six years removed from high school similar to a grey shirt that has an athlete wait until January to enroll and then takes a redshirt season the following fall.

When Trice was lightly recruited out of high school, he chose to attend a prep school, IMG in Bradenton, Fla. He needed more time to mature physically while continuing to polish his game.

Izzo was bigger than that coming out of high school on his way to his career at Northern Michigan as a talented NCAA Division II All-American guard.

The irony of Trice playing so well against the Spartans was his older brother Travis was a Michigan State star under Izzo. Travis Trice drove Michigan State to the 2015 Final Four with explosive play in March Madness, particularly 23 points when seventh-seeded Michigan State upset No. 2 seed Virginia in the second round.

In Michigan State’s 2015 march to the Final Four, D’Mitrick and his father, also named Travis Trice, were unable to attend all of the Spartans’ wins. They were on their own march — to a state title. D’Mitrick scored 19 points to lead Wayne past Westerville South 65-57 in the Ohio High School Athletic Association Division I final.

Izzo was asked about not recruiting D’Mitrick in his Wisconsin post-game media session.

“God, I hate to be as honest as I can be on this because I’m going to look bad but that’s the truth,” he said. “I can’t remember who we had then, and if there was a need, but the truth is it was our choice. I think if we would have offered him a scholarship, I think he would have come.”

Winston, of course, developed into an All-American player and Big Ten Player of the Year. That would have meant less playing time for Trice as a Spartan to develop. Does he evolve into the player he is now without averaging 30-plus minutes a game he gained at Wisconsin? We’ll never know. We only know how far he’s lifted his game.

“He went to the prep school for a reason. It was just to get better,” Izzo said. “Who does that anymore? That kid gets exactly what he deserves, and dog-gone-it, you’ve got to love people that do that. He had the courage to do that, but he had good people at home to talking to him.

In the past decade — since John Calipari arrived at Kentucky and installed a NBA one-and-done combine on a college campus — it seemed college basketball was destined to be dominated by one-and-dones following each other to the same schools like lemmings.

Kentucky’s one-and-done won the NCAA title in 2012 and went to the Final Four four of five seasons between 2011 and 2015. Duke’s one-and-done talent claimed the 2015 national title.

But then teams with veteran rosters disrupted the trend, taking home titles. Villanova won in 2016 and 2018 and Virginia in 2019.

North Carolina, the 2017 winner, is a blue blood, but it won with a veteran team led by two seniors, Kennedy Meeks and Isaiah Hicks, two juniors, Justin Jackson and Joel Berry, and one sophomore, Kenny Williams.

Freshman Tony Bradley was a one and done, but he didn’t start. In fact, the lack of one-and-dones until Bradley had been a criticism of coach Roy Williams’ recruiting in previous seasons without a Final Four trip.

College football now seems to locked in an endless cycle of top talent following each other like lemmings to the same schools and those teams dominating the College Football Playoff berths. There seems to be no end in sight to the confluence of Internet rankings and social media grouping recruits together.

But not long ago there seemed to be no end in sight to college basketball dominated by just a handful of schools.

So far there are no D’Metrick Trice-like players upsetting the cartel of Alabama-Clemson-Ohio State with Notre Dame and Oklahoma mixed in.