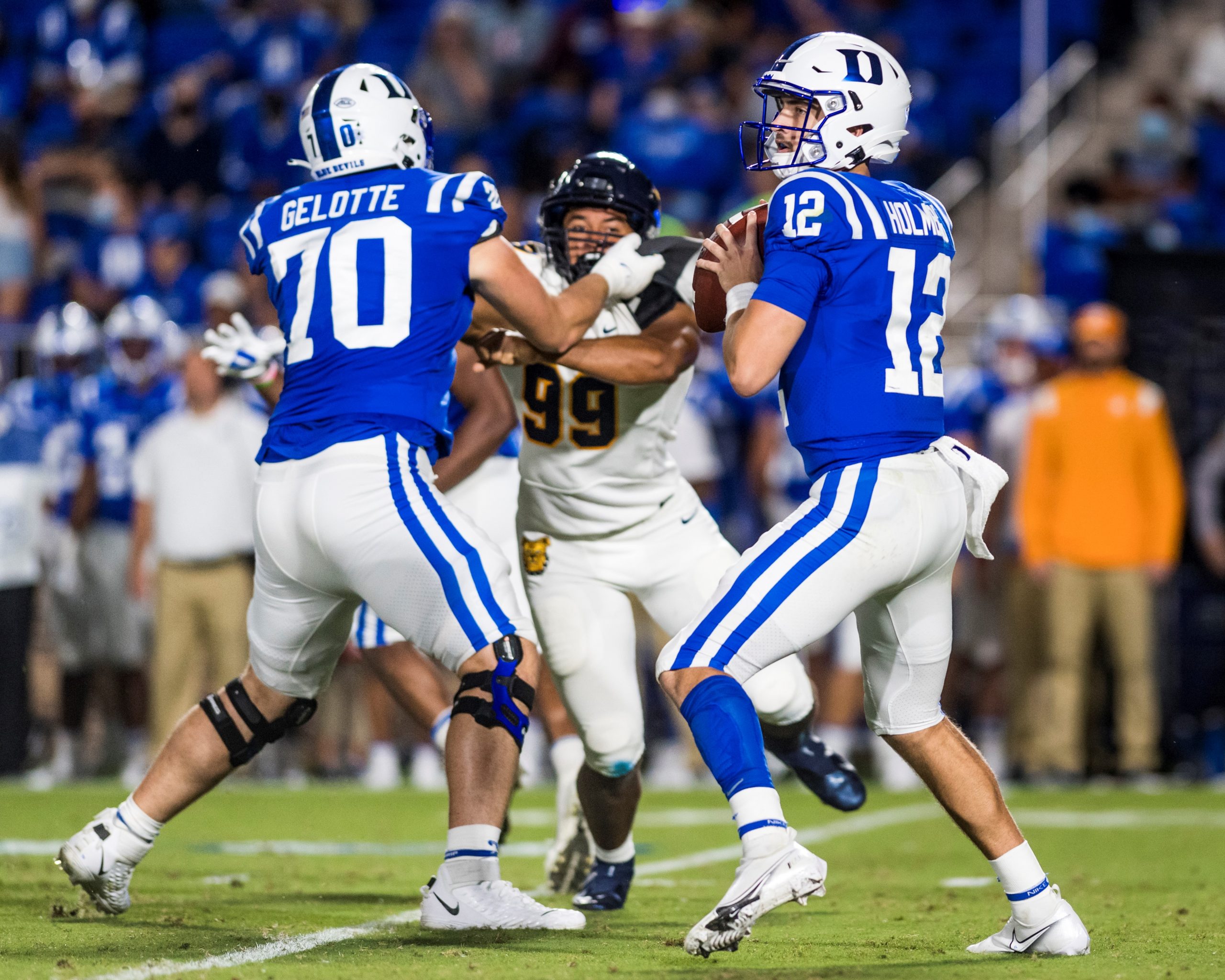 First there was an onside kick that the quarterback Gunnar Holmberg converted into a second straight touchdown drive for a 14-7 lead. The recovery and score sparked a 45-17 win for the Blue Devils (1-1) over North Carolina A&T (0-2) on Friday night at Wallace Wade Stadium.

“I didn’t even really know that we were going to do onside kick until we did it,” Holmberg said. “I guess that was something they had talked about in their special teams meetings all week, but it was really good to see the confidence in them. Charlie Ham’s a great kicker. We take a lot of pride in our special teams.”

Then, with five seconds left in the first half and the Blue Devils out of timeouts, Duke coach David Cutcliffe called for a run play rather than a pass or a field goal. Mateo Durant scored the second of his three touchdowns, keeping his hips in the air as he fell across the goal. That was the difference on a lengthy replay until the touchdown was ruled official.

“Coach Cut had the confidence to let a guy like Mataeo and our O-line go for it and just the trust we have in them,” Holmberg said. “(A&T’s defenders) were yelling at us to run the ball. It worked out such as, and instills the confidence we already have in our O-line.”

Despite the final score, Duke didn’t take a comfortable lead until Holmberg’s 9-yard run midway through the third period for a 35-17 lead.

The game couldn’t have started uglier for the Blue Devils. They were staring at a 0-2 start against Group of Five school, a 31-28 loss at Charlotte last week, and A&T as a Football Championship Subdivision member.

Duke received the opening kickoff and three-and-out. A procedure penalty on third-and-9 backed up the Blue Devils to third-and-14. After the snap, Holmberg was barely into his backpedal when he was sacked by Devin Harrell for 7 yards.

The Aggies’ first possession was a 20-play, 86-yard drive with six-of-six third-down conversions that consumed 12:08 on the clock.

Although the Blue Devils answered to tie the score on a 19-yard Durant TD run, Cutcliffe opted to keep the ball. He had told special teams coach Kirk Benedict earlier in the week he saw an opening to recover an onside kick after studying A&T’s game film from a loss to Furman.

Kicker Charlie Ham tapped a slow roller for an onside kick attempt Ham was hovered over and fell, but when the ball popped loose, Jaylen Stinson recovered the loose ball to keep possession. Duke drove 52 yards in five plays, the gain Holmberg’s 35-yarder to Jalon Calhoun. Durant scored on a 1-yard run.

Homberg finished the night completing 20-of-27 passes for 270 yards. He didn’t have a TD pass, but he also didn’t turn the ball over with an interception. He ran five times for 37 yards and two touchdowns. The early 7-yard sack was the only one the Blue Devils gave up.

A&T stacked the line and limited Durant to 15 carries for 41 yards, but his three TDs matched a career high. Jake Bobo caught a career-high nine balls for 90 yards and Calhoun five for 98.

“I think we feel good about moving forward and learning something from this game,” Cutcliffe said. “We’ve got to step up to the Big Ten and power 5 football and be ready.

Duke plays Northwestern next in a 4 p.m. game on Saturday at Wallace Wade Stadium