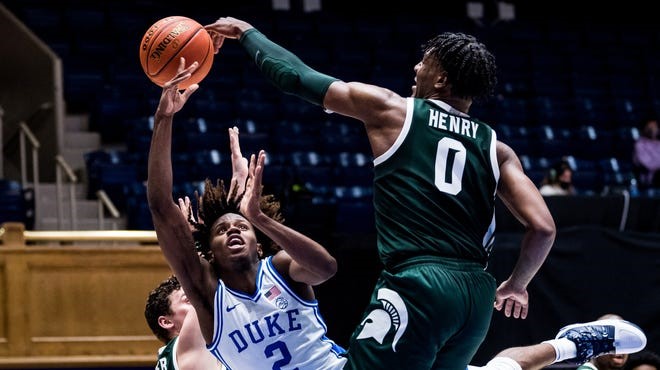 Michigan State coach Tom Izzo took another good team to Cameron Indoor Stadium, but this time his players responded to the usual Duke fast start and finished with a 75-69 Tuesday night in the State Farm Champions Classic.

The No. 8-ranked Spartans (3-0) delivered a pair of firsts for an Izzo-coached team against No. 6 Duke (1-1) – a win at Cameron and a win over the Blue Devils in the Champions Classic.

“We came down here to win a game,” Izzo said. “I think I’ve done a poor job over the years. I either got too hyped for the game or I gave them too much credit. I thought we were a good team that could beat them. I thought they had a good team, but we had defense and depth and it turned out that way.”

Sophomore guard Rocket Watts, making his first start at point guard after a bruised knee in preseason practice limited him, finished with 20 points to lead five players in double figures, including two off the bench.

The Spartans were quickly down 10 points before they regrouped. They finished the first half with a 37-33 lead, stretched the advantage to 16 points midway through the second half and overcame late mistakes.

This was only Izzo’s third win in 15 games over Duke’s Mike Krzyzewski, with the only other two in NCAA Tournament games.

“Tonight, I’m going to smile and enjoy this,” Izzo said of the team’s flight home. “I haven’t done a good job against Duke and still haven’t. A rivalry is a a rivalry when both teams are winning games. It’s been one-sided so this is one step in the right direction.”

The Champions Classic game was rescheduled for Duke due to the pandemic canceling the annual double-header that had been scheduled for the United Center in Chicago (Kentucky and Kansas played in Indianapolis).

“I’m not disappointed in my team,” Krzyzewski. “They came to play and came to win. But we didn’t. We lost to a really, really good team.”

Duke freshmen Jalen Johnson and D.J. Steward had started quickly in the win over Coppin State but struggled against the Spartans’ physical style of play. Johnson, who opened the season with a 19-19 double-double, got in foul trouble early and scored 11 points. Steward, who scored 24 in the opener, was 0-of-7 from the field with all six points from the free throw line.

Duke tried driving on the Spartans but struggled to finish shots.

“You never get all the shots you want, but when you get on drives on the bucket or around the post, you want the things – you want to score, you want to get fouled or you want to score when you get fouled,” Krzyzewski said. “When you empty on a number of those, that’s deflating. It’s also good for the other team. They know we had a chance and didn’t take advantage of it. We had some open looks in the second half our guys just half to knock down. It was tough to get good shots.”

Carson Wentz could use teammate lesson from Brees, Rivers and Flutie

Cutcliffe takes blame, adds to his schedule to face Virginia