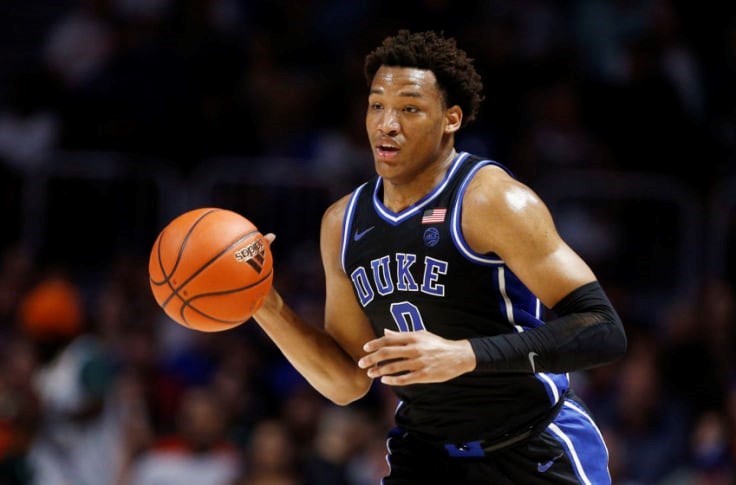 PHOTO (Duke Athletics): Wendell Moore has taken over a leadership role in the locker room and on the floor.

As Duke’s coaches observed Wendell Moore in the preseason, it was not whether junior swingman made the third shot he took after two misses in summer workouts that mattered.

What they liked was they saw growing confidence to take that third shot. He had passed it up as a freshman and sophomore. But a third of the way into the season, as Duke opens ACC play against Virginia Tech at 7:30 p.m. Wednesday at Cameron Indoor Stadium, Moore is enjoying a breakout season.

Duke associate head coach Jon Scheyer, taking over the media role on a Tuesday Zoom call that will be his routine as head coach next year, was asked about head coach Mike Krzyzewski not being shy about predicting a Moore’s improved play.

“He had a way about him in the workouts,” Scheyer said. “We’ve seen flashes of him for two years, but this year we saw the consistency with how he has approached every day working his tail off. I think he took a huge jump in his confidence. We saw him the first two years and we got into the summer workouts, and we saw the confidence level he was playing at.

“A good example was he would miss two in a row, and he’d shoot a third one. The first two years he was probably passing up the third shot. That’s when we thought, ‘Alright, Wendell. He’s ready for this.’”

Moore, a 6-foot-5, 213-pounder from Charlotte Cox Mill, is one of only two players in Division I who is averaging at least 16.0 points, five rebounds, five assists and shooting above 50 percent from the field. His numbers are 16.5 points, 5.6 rebounds, 5.1 assists and .581. He is second in the league in assists and in assists/turnover ratio at plus-2.83.

“Frankly, I’d put him up against anybody in the country,” Scheyer said. “He’s one of those guys you love to go to battle with. I’m proud of him with what he’s done, and I know he has a lot more in him still.”

Duke (10-1) plays its ACC opener while Virginia Tech (8-4) seeks its first conference victory after losing its conference opener 81-60 to Wake Forest on Dec. 4 at home at Cassell Coliseum. Duke is the ACC’s only ranked team at No. 2, but Scheyer said the subject of a facing a down league hasn’t been discussed.

“I think this year is still unique circumstances,” he said. “A lot can change between now and January or February. We’re focused on Virgina Tech. I can tell you, they’re a really good team. We’re focused on that.”

Duke is coming off a win, although the Blue Devils were fortunate to find an opponent. The game was originally scheduled against Cleveland State, but the Vikings had to cancel due to COVID-19 infections. A game was lined up with Loyola Maryland, but Greyhounds also had to drop out for COVID protocols.

Finally, Duke was able to schedule an opponent that was able to take the court. The Blue Devils defeated Elon, 87-56.

Duke, of course, hasn’t been alone with COVID infections disrupting schedules with another 20-some contests to be played.

“I think it’s made us all more aware for our interactions and just being as safe as possible while still living our life,” Scheyer said. “For our guys, masking up, washing our hands – those little things. We all want to get back to normal so badly, so you let some of those things slide.

“This has been a good wakeup call, forget about for us but I think for our country and for everybody that we need to still be safe and handle things the right way. Our guys want to play games. They’ll do whatever it takes for that to happen, and we’ll continue to stay diligent in that.”