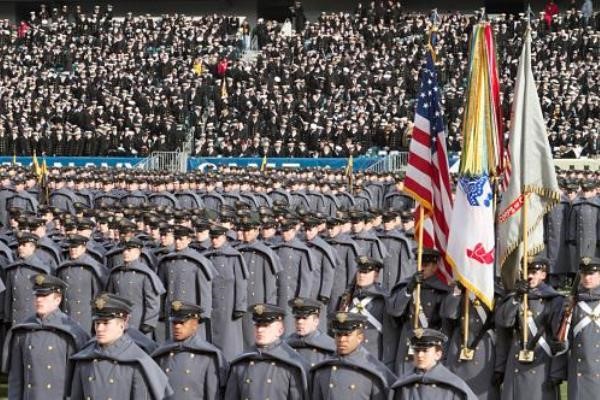 The road trip of the year for the West Point Corps of Cadets is to the Army-Navy Game. They board a bus for the round trip from West Point to the site of the game, traditionally Philadelphia.

The Corps of Cadets have duties — formal and informal. There is the March On. Army’s Corps of Cadets and Navy’s Brigade take their turns filling the field with precision marching. The March On, like the game itself, is something you have to see to appreciate.

Then, the Cadets take their seats in the stands for the game. Dressed in their classic dress greys, they provide ample color for TV shots of the crowd. West Point graduates all have their memories from the Army-Navy Game weekend.

Unless, I recently learned, you were a Cadet playing for Bobby Knight as Army’s basketball coach, 1965 to 1971.

That’s a cast that included (Ret.) U.S. Army Captain Mike Krzyzewski. He was a senior on the 1969 Army team that Knight led to the NIT, a 16-team field that was still a big deal in an era when the NCAA invited only 25 schools.

“Even as a Cadet I didn’t go to every Army-Navy Game,” Krzyzewski said. “Coach Knight … we’d go and scrimmage in Philadelphia at Penn. We’d scrimmage in the morning, the afternoon and the night.”

The future Coach K — his Duke coaching identity — and his Black Knights hoop teammates missed the Army-Navy Game, but at least they reaped the benefit of their drill sergeant-like coach’s extra work. Krzyzewski’s senior year in 1969 Army advanced to the NIT semifinals. The Black Knights defeated Wyoming 51-49 and South Carolina 59-45 before falling in the semifinals to eventual runner-up, Boston College, 71-63.

Anyone who has spent time covering Krzyzewski’s Duke teams knows he frequently references his West Point experience and how it shaped his life. His career, of course, evolved into college basketball’s all-time winningest coach with five NCAA titles.

So, with that background I assumed Coach K might want to return to an Army-Navy Game now that he’s in his last season coaching at Duke. We all like to return our alma mater for special occasions, right? Obviously, he’s otherwise been a bit busy the last 52 years – serving as an officer, spending a year as an Indiana graduate assistant under Knight, five as Army’s coach and now his 42nd at Duke.

Yes, basketball was his sport, but he supports all Army teams. He made sure Army basketball was on the schedule for his final season. The Black Knights played two games in the Duke Veteran’s Day Showcase at at Cameron Indoor Stadium, losing to the Blue Devils on Nov. 12 (86-52) and defeating Hartford on Nov. 13 (86-79).

At Duke’s media day, a cattle call with sportswriters basically limited to one or if they’re lucky two questions before the microphone is taken away and handed to another writer, I asked if an Army-Navy Game was on his retirement years bucket list. After all, if you’ve been to one Army-Navy Game you want to attend another.

I’ve been to five — four covering the game and one as a fan. In 2018, I decided to take in the experience from the stands with a friend who is a West Point grad, (Ret.) U.S. Army Col. Rick Steinke, and another high school friend, Rex Schuberg. People ask me if I served because I enjoy writing about the service academy football teams. No, I didn’t, but that’s my point. You can respect the players and the rivalry without having served.

But back to my question wondering if Coach K’s had thoughts of reliving his Cadets days at an Army-Navy game. Coach K looked at me quizzically and shook his head.

“My bucket list is different,” he said, perhaps envisioning a South Pacific getaway and wondering how I could compare the two experiences. “Nothing against that bucket list. I’ve been there. I love them. I talked to the (West Point) Superintendent last week. We were supposed to attend a dinner, but we had to cancel out. It’s good to have Army here, especially Veteran’s weekend.”

Then, Coach K, familiar with how his quotes are often cynically misinterpreted and spread virally on the Internet to take cheap shots at him, added, “I follow them like crazy, but I’m good.”

Maybe I didn’t phrase the question very well, but that happens in the impersonal setting of a cattle call interview. You’re not able to reframe your thought if you think the question wasn’t heard in the proper context.

Some of you who might have been drawn to read the story by the headline rather than an interest in the Army-Navy Game that you otherwise dismiss as two triple-option teams without the talent of college football’s top programs.

Yes, the Army-Navy Game talent isn’t what it was when it was America’s Game in the pre-Super Bowl era. Blame escalating NFL salaries growing the league into the Super Bowl as a spectacle and the Vietnam quagmire impacting players willing to commit to military service. The talent may not be what it was when Navy’s Roger Staubach and Army’s Rollie Stichweh split their epic 1963 and 1964 games, but the intensity has never waned.

Maybe it’s Bobby Knight’s fault Coach K doesn’t have the Army-Navy Game on his bucket list. Or maybe he’s only read John Feinstein’s basketball books and not his excellent book, “A Civil War,” on the Army-Navy Game’s rivalry.

Let him settle into retirement first. He may still back it back to an Army-Navy Game.