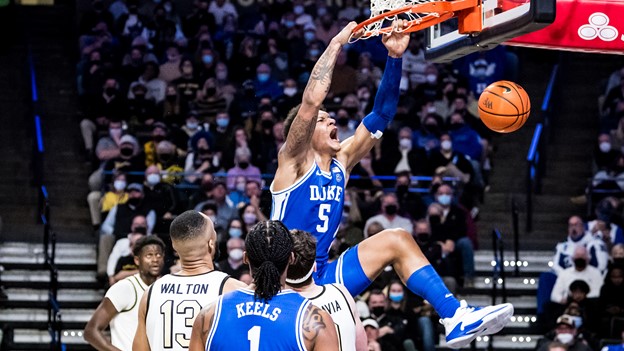 First, there was the post-game celebration.

The Blue Devils won 76-64. That was routine for a blue-blood program that this season is ranked No. 8 in the nation with a 13-2 record overall and 3-1 in the ACC.

The second celebration was satisfaction and relief among the coaching staff.

When Mike Krzyzewski missed the game with non-COVID infection, it was an early test for Jon Scheyer, the head coach in waiting until Coach K retires at the end of the season, as well as his assistants with adjusted roles.

“It was definitely the first look with the new staff,” said assistant coach Nolan Smith, who met with the media Friday on a Zoom call. “Whenever Coach is out it stinks, but he lets you know you have to step up. One thing you don’t want to do without your head coach is lose. There was a sense of pressure on all of us.”

The coaches exhaled and celebrated once Coach K checked in on a facetime call with the team.

“After we won, the main thing was Coach said, ‘I feel a lot better.’ It got us feeling, ‘What would be like if we lost. What would his feeling be then? Thankfully, we didn’t have to worry about that. We won. We got him feeling better. He was excited to see our guys on facetime. He said, ‘I can’t wait see you all when we get back.’ It felt good.”

“There was great chemistry on our bench with all of us. It felt natural. It felt real. Not thinking ahead too much, but it felt good, that’s all I’ll say.”

Smith said Krzyzewski reminded the Blue Devils their roles were all a bit different.

“I had to step up for our team and be there for coach Scheyer and make sure as a group we were well prepared to win the game,” he said.

N.C. State provides a different kind of preparation behind the play of Dereon Sebron, a 6-foot-7, 180-pound redshirt sophomore guard who leads the Wolfpack with 19.8 points and 9.8 rebounds.

The Pack have won two of their last three games, including an impressive win Wednesday over Louisville on the road, 79-63. Sebron, who has carried the team through its losses, received support from Terquavion Smith, a 6-4, 160-pound freshman from Farmville Central. Smith finished with 24 points on 9-of-13 shooting, including 6-of-9 from three-point range.

Duke also has a little different look after freshman A.J. Griffin made his first start at Wake Forest. He scored a career-high 22 points, hitting 8-of-11 field goals and 3-of-5 treys.

Griffin, a potential one-and-done, was slowed by a bruised knee early in practice, but in the last seven games he’s averaged 13.1 points. He’s hit half of his three-pointers, 13-of-26. Smith said the 6-6, 222-pounder benefited from the time the team missed between the Dec. 22 win over Virginia Tech and the Jan. 4 win over Georgia Tech due to COVID-19 postponement of the Clemson game.

“His body has changed from the start of the season to now from all the extra work he’s been able to get in,” Smith said. “He’s starting to become the athlete, the A.J. Griffin we saw in high school. He’s slimmer, he’s more athletic, bouncier. But just mentally, we saw him flip the switch. The teammates saw it in practice, and it’s carried over to the games. It’s, ‘this dude is really good, he’s here.’ I think Duke fans are really excited about this.”