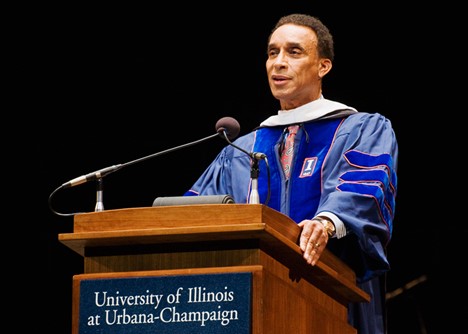 A treasure trove of untold sports stories pivotal to integration can be still uncovered a half-century later. The 1950s and 1960s media avoided racial issues, leaving stories of figures on the right side of history to be revealed.

This was demonstrated to me once again in separate interviews with a pair of University of Illinois alums: Jesse Jackson and Jerry Colangelo.

Jackson, the Civil Rights leader who was an Illinois football player before he transferred to North Carolina A&T. Colangelo, Managing Director of USA Basketball who was an All-Big Ten basketball player at Illinois, knew each other. They took a class taken together in the 1959-60 school year.

They also knew Mannie Jackson, one of the Big Ten’s pioneer African-American basketball players at Illinois.

Mannie, an All-Big Ten pick, was named the Illini’s first Black team captain as a senior in the 1959-60 season. His jersey hangs in State Farm Arena along with other Illinois legends.

Mannie, who was from Edwardsville, Ill., moved on to a career as one of America’s leading Black corporate executives, working at companies such as Honeywell. Later he bought and revitalized the Harlem Globetrotters. The NCAA honored him in December with the Theodore Roosevelt Award.

He tried to bring the NBA back to San Diego while leading an ownership group. The effort failed but not due to any blame on Jackson’s end.

A Mannie Jackson story that stuck with Jesse Jackson all these years was how Illinois basketball head coach Harry Combes requested his white players – Mannie was among only two Black players on the squad — reconsider a players vote that elected Mannie team captain.

“The coach asked if maybe there should be a co-captain, but the team rebelled against him,” Jesse said. “The guys and Colangelo stood with Mannie Jackson; they said he was part of the team.”

I didn’t include the Mannie Jackson story in the book, but I recently had a chance to interview Colangelo; I hoped to connect the dots. Colangelo remembers a second vote, but he says Jesse Jackson gave him too much credit.

“Honestly, I don’t remember too much of the story or about how Coach Harry Combes handled Mannie’s election,” said Colangelo, “other than that my memory is there was another vote taken and that (Mannie’s election) was the result.”

Colangelo added the local Champaign, Ill., newspaper included a photo of him and Mannie Jackson subsequent to the captain votes in the spring of 1959. For Colangelo, it was a post-season honor after he played on the freshman team in the era of NCAA freshman ineligibility (he was later a team captain as a junior and senior). For Mannie, the Illini custom then was to vote for the next season’s team captain at end of the completed season. Thus, Jackson was named for his senior year at the conclusion of his junior season.

Mannie and Colangelo are both 75 years old, but they weren’t in the same college class. Colangelo had transferred back to his home-state university from Kansas. He had enrolled at Kansas for the 1957-58 school year with the expectation he’d play with Wilt Chamberlain the following year.

But Chamblerlain, who led Kansas to the NCAA Final Four as a sophomore in 1956-57, left Kansas at the end of his junior year in1957-58. He signed for a year with Harlem Globetrotters before he was eligible for the NBA Draft.

“Color never meant anything to me, the way I grew up and where I grew up on the far South side of Chicago,” Colangeo said. “But in Mannie’s book (“From Boxcars to Board Rooms”) he refers to difficulties he had in being a pioneer as one of the first couple of African-Americans to play at Illinois in basketball.”

In today’s media environment, such an incident of a the head coach calling for a re-vote over a black team captain would have been leaked and created a firestorm on par with former New York City Mayor Rudy Giulani stating President Obama doesn’t love his country.

But media attitudes were much different in the 1950s and 1960s. Newspaper publishers feared offending subscribers and advertisers and thus avoided noting racial subjects. The attitude included the spring of 1947; there was little reporting beyond the obvious that Jackie Robinson broke Major League Baseball’s color line that season.

Examples of history that were unreported in real time and left to be highlighted in “Raye of Light” a half-century later included Clifton Roaf in 1959 as Michigan State head coach Duffy Daugherty’s first Underground Railroad passenger recruited from the segregated South out of Pine Bluff, Ark.

In addition to Webster and Jones as Black captains, others milestones ignored were Sherman Lewis as the first Underground Railroad All-American pick in 1963 out of Louisville, Ken., and Jimmy Raye as the South’s first black quarterback to win a national title in 1966 out of Fayetteville, N.C.

But the contributions of Mannie Jackson and Michigan State’s Underground Railroad passengers were important, according to Jesse Jackson. He says they played a role in the Civil Rights movement simply by being seen in positive roles on TV and in newspapers and magazines.

“These athletes re-defined race relations in many ways,” Jesse says in Chapter 1 of “Raye of Light.”

My N&O story: Williams’ specialty is the season he’s playing