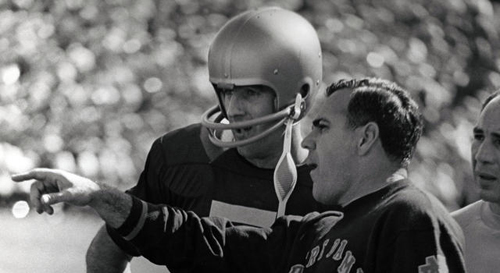 The common reaction to Brian Kelly’s abrupt move on Nov. 30 from Notre Dame to LSU was surprise, but that doesn’t begin to describe Notre Dame legend Terry Hanratty’s reaction.

“He threw everybody under the bus,” Hanratty said. “When he made that appearance in Louisiana, he said he’s got the greatest coaches, the greatest AD and the greatest president.

“He threw our players, (athletic director) Jack Swarbrick and (president) Father (John) Jenkins under the bus. Diplomacy is part of the deal. I’m happy he showed his true colors.”

Hanratty, forever linked to the Notre Dame-Michigan State 1966 Game of the Century, was a 1966 national champion, All-American quarterback and three-time Top 10 finisher in the Heisman voting. He played eight years in the NFL, including two Super Bowl rings with the Pittsburgh Steelers.

Comments around college football Kelly has a better chance to win a national title at LSU than Notre Dame also bothered Hanratty. Kelly left the Irish when they were still in contention for one of the four College Football Playoff berths depending on how the conference championship games turned out. Notre Dame ended up No. 5 in the final CFP poll.

Hanratty projects Notre Dame to compete for national titles, particularly the next two seasons, based on recent recruiting classes. Rivals.com ranked Notre Dame’s 2021 class No. 9 in the nation its No. 2022 class No. 7.

“They should be No. 3 in the preseason next year,” he said. “They’ve got talent and depth.”

Hanratty’s optimism includes his confidence in new head coach Marcus Freeman, who was promoted from defensive coordinator. Freeman’s first game is guiding the No. 5-ranked Irish (11-1) against No. 9 Oklahoma State (11-2) on Jan. 1 in the PlayStation Fiesta Bowl.

Freeman, 35, joined Notre Dame’s staff in 2021 as a highly touted DC at Cincinnati. Freeman and Notre Dame offensive coordinator Tommy Rees both opted to remain at Notre Dame rather than follow Kelly to LSU.

“I haven’t met Marcus, but I’m looking forward to it,” Hanratty said. “When you saw those videos of how the team reacted when he was named the head coach, that tells you what the players think about him. It was heartwarming. I think he’s a wonderful for our school. He was the perfect choice.”

Hanratty said the pay raise Kelly gained doesn’t justify the move. Kelly was making between $7 million and $8 million a year at Notre Dame.

The “handing out” comment was hyperbole in the wake of notable salary bumps around the nation in the past month. Michigan State’s Mel Tucker signed an extension with 10 years, $95.5 million. USC’s Lincoln Riley left his Oklahoma contract of six years and $42 million for a deal reported to pay him $9.7 million a year for 10 years with perks totaling $110 million. Miami’s Mario Cristobal left Oregon for Miami’s deal of 10 years, $80 million.

His point, though, was asking the difference between $80 million and $90 million when the choices are Notre Dame’s history compared to LSU.

Hanratty added he’ll be rooting for Alabama at least once a year beginning next season. Alabama and LSU are rivals in the SEC West.

“I’ll tell you what,” said Hanratty. “I’m now an Alabama fan every time they play LSU.”

Pep Hamilton paid back mentor that opened NFL doors for him