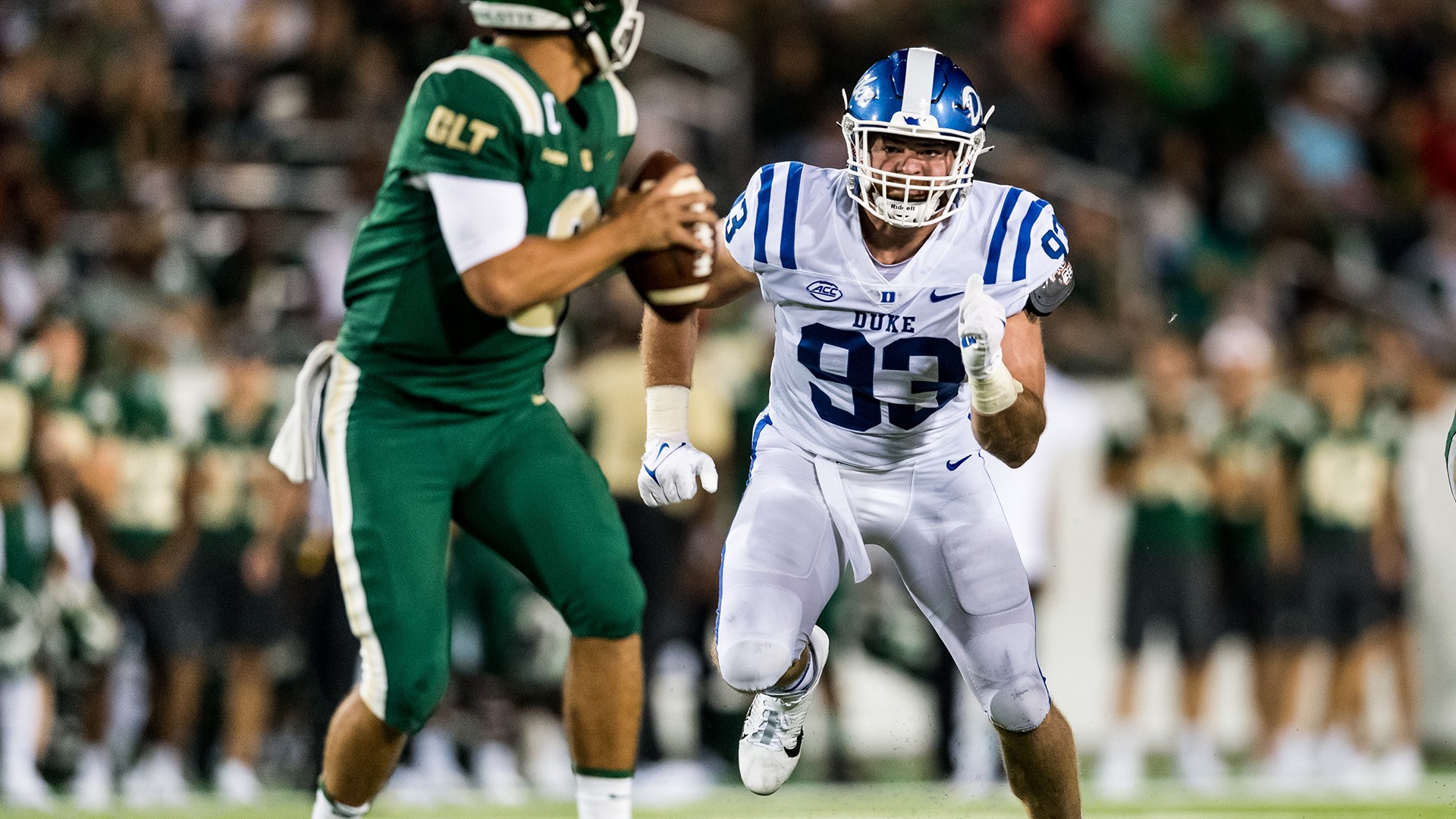 DURHAM – If Ben Frye played football like a modern-day college athlete, he’d be long gone from Duke. Instead, the graduate student is starting at defensive end in his fifth year at the school.

In today’s world, the transfer portal redirects players – sometimes with snap decisions. Maybe they felt they weren’t getting enough playing time. Maybe they’re asked to play out of position. Or maybe they just don’t like the coach.

Out of position described Frye, but he never thought about transferring last year or anytime in the past a redshirt in 2017 and backup in 2018 and 2019.

“I committed to Duke as a junior in high school,” said Frye of Dublin (Ohio) Coffman. “This is the school I wanted to play at. I love my position coach, Ben Albert. I don’t think I’d ever play for another coach. It was a trust in the process and trust in this program.

“They’ve given me opportunity after opportunity. The sky is the limit here. I’m getting the best degree possible and playing for a team I truly love. There was no other option for me.”

A year ago, the Blue Devils had two future NFL draft picks to build around at defense end. Chris Rumph II was a fourth-rounder by the Los Angeles Chargers and Victor Dimukeje a sixth-rounder by the Arizona Cardinals.

Duke coach David Cutcliffe and Albert, the co-defensive coordinator/defensive line coach, decided the best four-man front was to include Frye at defensive tackle, even though he was undersized for as a 6-foot-3, 255-pounder. He spent his battles in the trenches giving away 50-some pounds to interior offensive linemen.

But with an old-school attitude and two-sport athlete edge as a wrestler to provide him a techniques advantage, he started nine games and earned All-Academic ACC honors. Frye finished with 28 tackles, three tackles for losses of 10 yards and a sack for four yards.

Frye, enjoying the move back to his natural position, had a strong season opener despite the Blue Devils’ 31-28 loss Friday at Charlotte. Fry matched his career high with two tackles for losses of six yards.

Overall, though, the defense gave up too many plays with missed tackles and third-down conversions. Duke has emphasized tackling in practice this week as the Blue Devils (0-1) prepare for their home opener against North Carolina A&T (0-1) at 8 p.m. Friday at Wallace Wade Stadium.

“We’ve got to finish,” Frye said. “If you go back on film and look at the plays. We weren’t finishing through on tackles. Tackling was definitely an emphasis in practice this week. Wrapping and bringing your hips under you. That goes for everybody, not just individual positions.”

Frye was the Blue Devils only returning starter up front despite his shift outside, but he has confidence in the two tackles gaining experience rapidly, DeWayne Carter (6-3, 300) and Gary Smith (6-2, 320). Carter made his first start at Charlotte and Smith is slotted to make his first start against A&T after missing some time in fall camp after hurting his knee. Michael Reese (6-4, 250), the end opposite of Frye, also made his first career start.

“You’ve got to have a short memory,” Frye said. “You’ve got another game this week. There is no secret answer. It’s all how much quality work can we get in. How much and learn and not dwell on it. We’re disappointed but not defeated.”

Duke needed Frye last year, even if he was out of position. They need him even more this year as an anchor up front. The NCAA didn’t create the transfer portal for guys like Ben Frye.

Duffy Daugherty and the case for the Presidential Medal of Freedom