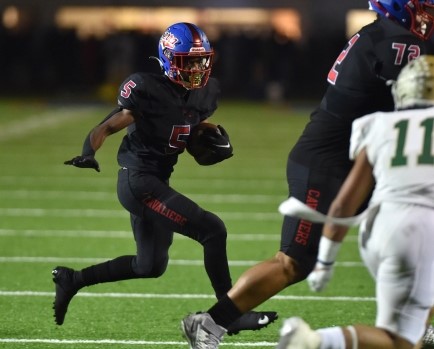 PHOTO: Gardena Serra’s Troy Tw Crozier is the great-great nephew of Michigan State’s Horace Smith, a pioneer athlete for the Spartans from 1946-49.

Bear Bryant may have tried to prevent Horace Smith from taking the field for skin color in a 1947 Kentucky-Michigan State game, but Smith’s spirit freely ran up and down football fields 74 years later through his great-great nephew’s 2021 season.

Troy Tw Crozier, a senior at Gardena (Calif.) Serra, finished the year with 1,173 all-purpose yards and 10 touchdowns, helping the Cavaliers win a California 1A Division state title. His most important touchdown was a 75-yard catch-and-run in the fourth quarter to lift Serra to a comeback 21-17 victory in the semifinals over Long Beach Poly, a traditional California powerhouse.

“I think I had a little of him in me running to the end zone,” said Tw Crozier, who only recently learned about his great-great uncle’s talent and perseverance in the face of racism.

Horace Smith was a Michigan State four-year letterman from 1946 through 1949. He led the Spartans in scoring with five touchdowns in the 1947 season as an all-purpose halfback that could run, catch and pass.

In 1946, Michigan State, then coached by Charlie Bachman, shamefully left behind Smith when the Spartans traveled to play segregated Kentucky in Lexington. Bryant was in the second season of an eight-year stay with the Wildcats before moving on to Texas A&M and greater fame at segregated Alabama.

In those days, a “gentleman’s agreement” bound northern schools to withhold their Black athletes against southern opponents. But with Munn as the new head coach in 1947, by the time Kentucky traveled to Michigan State for an Oct. 25 game in East Lansing, the Spartans no longer abided the gentleman’s agreement.

Not much is known about what happened that afternoon once the teams took the field for the simple reason of media customs. In those days, the mainstream media avoided writing about race in sports stories. Consequently, there was no mention Smith established history as Michigan State’s first Black player to face a segregated opponent. Only the score, Kentucky won 7-6, and statistics of leading players.

“They wouldn’t come on the field,” Uribe is quoted in the article. “It took quite a while before they agreed to play the game.”

Smith’s contribution was limited to two carries for 11 yards, but in a run-oriented offense with a four-man backfield, his presence included plenty of opportunities to block bigoted Kentucky opponents.

Smith also was a track athlete for the Spartans. Upon graduation, Smith played briefly with the Detroit Lions before he began a teaching career in the Flint City Schools District.

“My grandmother told me about him,” said Troy, who, for those wondering, explained Tw Crozier is the legal spelling of his surname. “I couldn’t believe what I heard about how he was treated, but in that time that’s how things were back then. It’s good that times have changed, but we still have problems and farther to go.”

Dr. Louis Moore, a professor at Grand Valley State University in Allendale, Michigan, believes such stories need to be told. One reason is as simple as today’s generation of kids don’t understand segregation is recent history, not ancient.

“These are great opportunities for schools to wrestle with the past,” Moore said. “We can celebrate the guys and look internally at what happened, but then I think the worry is it dissipates. Everybody pats themselves on the back, but we move on.

“A school may have integrated, but there are continuous problems on campuses. It’s good to recognize what happened, but we have to continue to work on problems.”

Tw Crozier, who doesn’t have a ranking on 247 Sports or Rivals recruiting services, faces his own obstacles to playing Division I football, but he says at least he knows it’s not about skin color.

Obstacles have included the COVID-19 pandemic limiting scouting opportunities, which especially impacted the Class of 2022 and undersized players such as the 5-foot-10, 165-pound Tw Crozier. High school and college coaches early on saw the COVID-19 impact on scouting when high school sports were shut down in the spring of 2020 through summer camps and the fall 2020 season.

But since then, it’s changed even more with the growth of the transfer portal. A school can pick up a 20- or 21-year-old athlete as opposed to an 18-year-old kid.

“Schools like USC and UCLA only signed about 11 or 12 high school kids (in the Dec. 15 signing date),” said Gardena Serra coach Scott Altenberg said. “The high school guys getting snapped up are the ones with size. Colleges are waiting to see how things flush out with the transfer portal. It’s changed everything.

“But I’m working really hard to get Troy something when colleges come back around for the February signing date. Troy is a fantastic player – he’s going to be all-everything (by the time all-area and all-state teams are named). He’s a college player.”

With the 2020 fall season canceled, Serra only played six games in the spring of 2021. Altenberg used Tw Crozer as a running back, but he switched him to an all-purpose player as a 2021 senior, using him at running back, receiver and slot back. He finished the year with 99 carries for 595 yards rushing (6.0 per carry) and three touchdowns and 46 catches for 578 yards (12.6) and seven TDs.

“We face so many good athletes in our league,” he said, “we wanted to be able to move him around to get matchups we wanted.”

Altenberg, who won his 201st career game with the 2021 state title, has his own small-world connection to Michigan State. His late father, Kurt Altenberg, played for UCLA in the 1966 Rose Bowl against Spartans, catching three balls for 55 yards in the Bruins’ 14-12 victory, a monumental upset in the annals of college football.

“In a normal year, we’d have 40 to 50 colleges come out to practice,” he said. “A guy like Troy leaps off the page when you can watch him run around in practice, but on film they worry about his size. He has tape against great teams that we played this year.”

Scouts watching the Serra-Poly tape can notice that Tw Crozier also had a 73-yard catch-and-run touchdown in the third quarter that was called back. He said he ran an out-and-up pattern down the right sideline, but the referee ruled he had stepped out of bounds before coming back on the field.

“He said my pinky toe was out of bounds,” said Tw Crozier, “but the cornerback was bumping me.”

In the fourth quarter, with Serra trailing 17-14, Tw Crozier scored the game-winner on essentially the same play, although this time it was an audible. Quarterback Maalik Murphy, who signed on Wednesday with Texas, noticed the safety was out of position and changed the play from and out to and out-and-up.

“Those were the only two times we ran the play in the game,” Tw Crozier said. “The cornerback was still bumping me, but I just had to beat him and then I knew I could outrun the safety and score.”

The idea is growing with pride in him that a little of Horace Smith was with him on the sprint to the end zone.