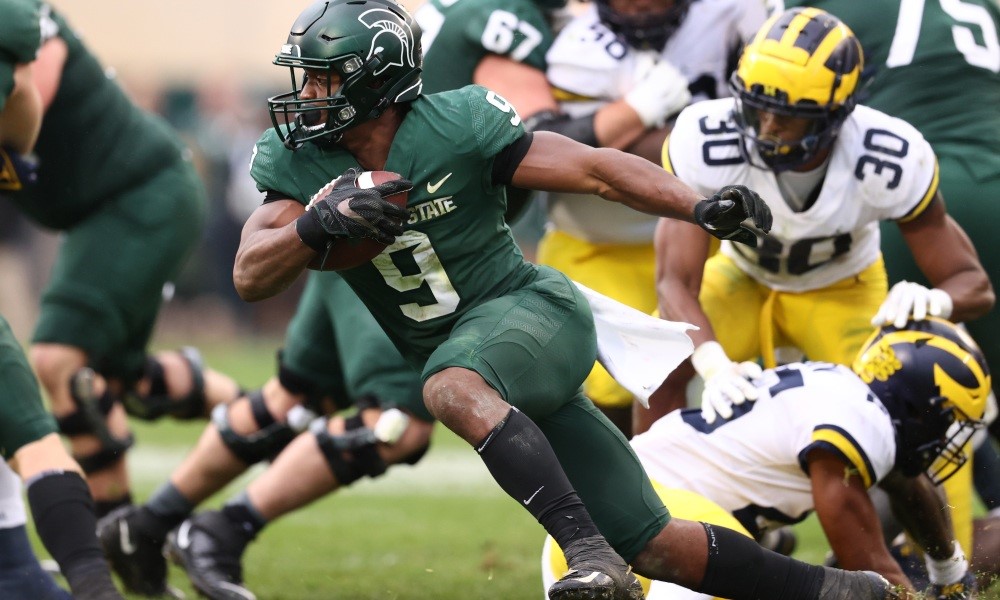 PHOTO: Kenneth Walker posted his Heisman moment against Michigan with 197 yards and five touchdowns in a 37-33 upset victory over the Wolverines.

Those select players, backed up by talent of top recruiting classes supporting them to reach national title contention, have their highlights played on a loop all day, all week leading up to the early December Heisman voting deadline. The narrowed focus funneling a handful of players into the spotlight easily influences voters, at least based on recent Heisman voting results.

The Heisman also used to be about character – it says so on the Heisman mission statement — but that box no longer needs to be checked. Endless highlights were enough for Reggie Bush (2005) – the only Heisman winner forced to give back his award in disgrace – and the showmanship that overrated the talent of Johnny Manziel (2012). Even Manziel got to keep his Heisman.

But that’s another story.

The two-or-three player funnel based on the national title radar has been narrowed in the College Football Playoff years that began in 2014, but the evolution also can be traced to the dawn of the Bowl Championship Series (1998-2013).

In 1998, the first year of the BCS before the trend began, Williams played on a team that lost three regular-season games, including back-to-back September defeats, Sept. 12 against at UCLA and Sept. 19 at Kansas State. Texas was routed by Kansas State, 48-7. Williams was held to 25 carries and 43 yards (1.7 per carry).

That 1-2-3 punch is automatic elimination these days.

But then-Texas coach Mack Brown, realizing the damage to Williams’ Heisman hopes, unleashed him in the following week’s 59-21 romp over lowly Rice. Williams ran 30 times for 322 yards and six touchdowns.

Brown, telling the story as North Carolina’s head coach at last summer’s ACC preseason media days, says he was relieved Rice coach Ken Hatfield understood why Brown kept Williams in the game. During postgame handshakes, recalled Brown, “Ken was great after the game. ‘I got it, you got to keep him in.’”

In Williams’ 1998 voting, the BCS final matched Tennessee defeating Florida State. Neither Tennessee or Florida State had a player finish in the Top 10 Heisman voting.

Taking such a theory one step further, can a player from outside of what today is called the Power 5 win a Heisman? Doubtful. Extremely unlikely.

The last two non-Power 5 Heisman winners were BYU’s Ty Detmer in 1990s and Houston’s Andre Ware in 1989, although at the time Houston was a member of the defunct Southwest Conference.

Ware won despite Houston losing two games in October and the Cougars finishing ranked No. 14 with a 9-2 record.

Detmer won despite BYU losing in September and a Dec. 1 loss at Hawaii shortly before the Heisman voting deadline. The Cougars finished the regular season ranked No. 13. Their final record after a bowl loss was 10-3 with a No. 14 ranking.

Here’s another sad example of how the best player with the best season has been often overlooked.

In 1992, ESPN’s Lee Corso pounded the table on College Gameday sets making the case for Miami quarterback Gino Torretta to win the Heisman. Torretta, playing for the year-long, No. 1-ranked Hurricanes (Miami lost its bowl game to finish No. 3), easily beat out runner-up Marshall Faulk of San Diego State.

How would that revote turn out?

In another time, Michigan State junior running back Kenneth Walker III might have done enough by now to win the Heisman. That remains to be seen now that we’re in an era heavily influenced by CFP hunt recaps on cable TV the next week or so.

Walker, despite playing the last three games with an ankle injury, finished the regular season averaging 136.3 yards a game with 6.2 per carry. He scored 18 touchdowns, including five in a “Heisman moment” comeback win over Michigan with 197 yards.

In the last three weeks on an injured ankle, he ran for 143 yards and two touchdowns to beat Maryland, was pulled while hobbled after six carries and 25 yards when the Spartans didn’t match up with Ohio State and 138 yards and one touchdown in the snow to beat Penn State and clinch a 10-2 regular season.

Similar statistics were enough for Mark Ingram to win the Heisman in 2009, with the boost of playing for a national championship team. Ingram averaged 127.6 yards and 6.6 per carry. Similarly, Alabama’s Derrick Henry, playing on a 2015 national title team, won the 2015 Heisman with a 150.0 average and 5.6 per carry average.

But entering the final weekend of the 2021 season, Alabama sophomore Bryce Young and Ohio State quarterback C.J. Stroud – two players with more talent around them than Walker — remained ahead of Henry in Heisman odds.

Stroud may drop after the Buckeyes’ loss to Michigan, but that only strengthens the theory. And watch. It also means Michigan defensive end Aiden Hutchinson will climb higher than a d-lineman can usually finish. Barring a collapse from Alabama and Young against Georgia in the SEC final, Young may have already wrapped up the Heisman.

A recent look at the CFP/Heisman correlation:

In 2019, LSU won the national and Tigers quarterback Joe Burrow the Heisman. Second was Oklahoma’s Jalen Hurts and third was Ohio State’s Justin Fields. Both players’ teams were in the CFP.

In 2018, Clemson won the national title without a Heisman winner, but the 1, 2 and 3 Heisman finishers all played in the CFP.  They were Oklahoma’s Kyler Murray, the Heisman winner; Alabama’s Tua Tagovailova, second; and Ohio State’s Dwayne Haskins, third. Clemson running back Travis Etienne was seventh.

In 2017, Alabama won the national title without a Heisman winner, but Heisman winner Baker Mayfield of Oklahoma was a CFP participant. Otherwise, this was a year when the voters showed clear minds to open the field to the most talented players outside the CFP picture. Stanford’s Bryce Love was second and Louisville’s Lamar Jackson, the winner the previous year, was third.

In 2016, Jackson was the only example of the Heisman winner not participating in the CFP. But keep in mind it was only the third year of the CFP. The Heisman runner-up was Clemson’s Deshaun Watson, a CFP participant. Two other CFP participants with Top 10 finishers were Washington, quarterback Jake Browning, sixth, and Alabama, defensive lineman Jonathan Allen, seventh. A defensive lineman doesn’t finish seventh without the boost of CFP attention.

In 2015, Alabama won the national title and Crimson Tide running back Derrick Henry the Heisman. Stanford’s Christian McCaffrey, the runner-up, was outside the CFP, but CFP participant Clemson was represented by third-place Deshaun Watson. Fourth-place Baker Mayfield was a CFP player.

In 2014, the first year of the CFP, Ohio State won the national title with quarterback J.T. Barrett placing fourth. The Heisman winner was Oregon’s Marcus Mariotta, who lost to Ohio State in the CFP final. Third in the Heisman voting was another CFP participant, Alabama wide receiver Amari Cooper.

College football is supposed to be about 100-some teams, not a half-dozen or so.

Bottom line in 2021, no player did more to lift his team to higher heights than Kenneth Walker. The Spartans were picked to finish last in the Big Ten East. Young played for the preseason’s No. 1-ranked team and Stroud for the No. 4.

All of the above should make a strong case for Walker in the 2021 Heisman voting as it did for Ricky Williams in the 1998 Heisman voting on a No. 15-ranked team. But that was an era that was pre-BCS, pre-CFP and pre-cable TV hyped highlights shows.

Walker’s chances dropped not with his performance the last three weeks but with the Spartans falling out of the CFP picture.