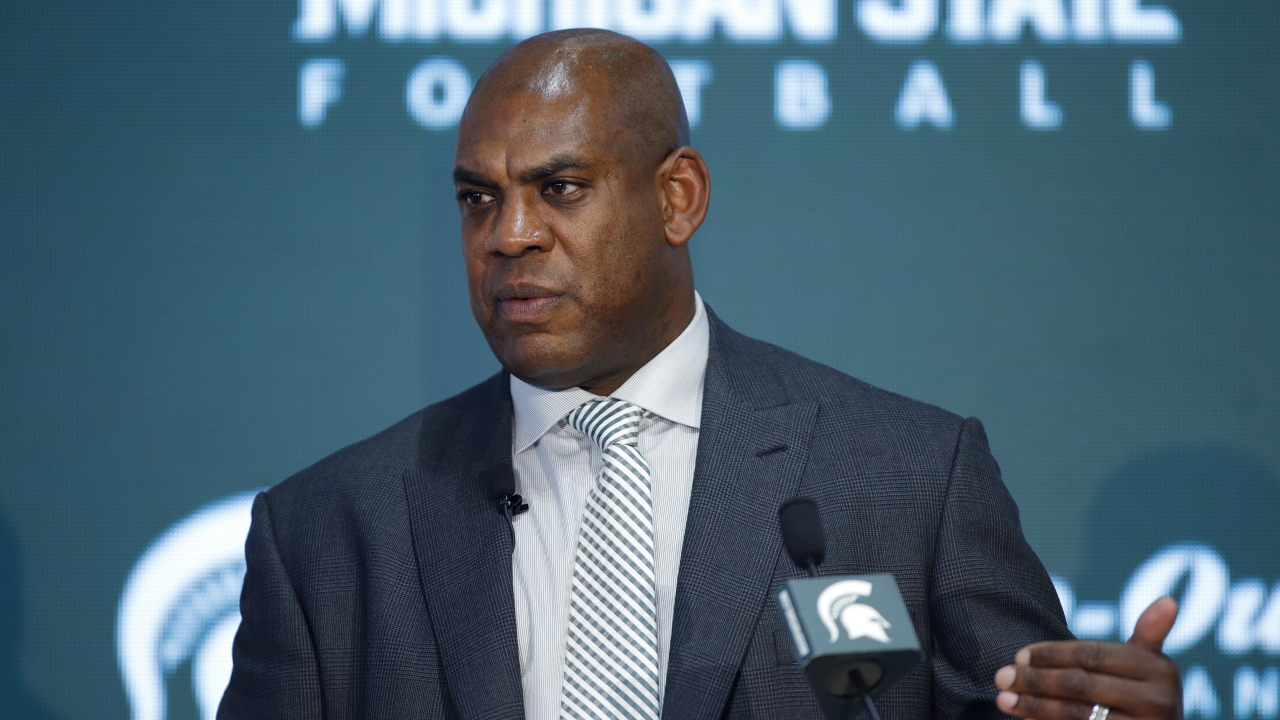 PHOTO: Mel Tucker had a vision for Michigan State when he accepted the job in 2020.

Let’s back up a moment on the rush to judge Michigan State lumping Mel Tucker’s new $95-million contract with Nick Saban, while comparing Saban’s seven national titles to Tucker’s none.

The contract raised the stakes in the eyes of media and fans, but not in Tucker’s mind. He raised that bar on his own long ago with president Samuel L. Stanley, face to face.

I don’t know what Tucker has said to Stanley in private conversations, but I heard his comments as an alumnus on a July Zoom call panel discussion Stanley hosted along with three other coaches, Tom Izzo, Suzy Merchant and Stacy Slobodnik-Stoll.

Tucker didn’t hedge his bets presenting his vision of the program. He understands the potential of a campus that won national titles under Biggie Munn in the 1950s and Duffy Daugherty in the 1950s and 1960s. He’s known it since he was a graduate assistant under Saban with the Spartans, 1997 and 1998.

“There are only two teams in the Big Ten that have been to the (College Football) Playoffs and only 11 (overall) that have been to the playoffs,” Tucker said. “We’re one of them. Why not Michigan State? We’ve got six national championships. There are a lot that don’t have any. We’ve got to get in there and fight. We’ve got the coaching staff; we’ve got the culture. You get the players, now you’ve got a chance. I really believe we can get the players here. We just have to get out there and fight.”

Easily said but tough to do. Tucker already had the job that July Zoom call evening. He didn’t have to remind his boss and inform alumni watching at home of his great expectations, but he proceeded to lay out his road map.

“I tell our coaches we have to recruit every single day, never take a day off recruiting. We have to get out there and fight for the best players in the nation. We’ve got to get in a battle and see if we can find a way to get these guys. That’s what we have to do. We have to sell Michigan State, sell academics, sell branding, NIL (Name Image and Likeness) and all of the things we can do for them on the field and off the field.”

That’s a man with a plan.

Tucker beat other schools for Kenneth Walker III when the former Wake Forest running back entered the transfer portal. Michigan State isn’t contending for a Big Ten title and College Football Playoff berth entering Saturday’s game at Ohio State without Walker leading the nation in rushing and contending for the Heisman Trophy.

I may be jumping to conclusions, but I think the two wealthy Michigan State alums, Mat Ishbia, CEO of United Wholesale Mortgage, and Steve St. Andre, CEO of Shift Digital, didn’t donate money for fear of losing him.

They did it to effectively end speculation he was leaving — to LSU or anywhere else.

Ishbia and St. Andre were weary of ESPN, The Athletic, Sports Illustrated or other haughty national outlets quickly listing Tucker as gone to LSU or USC.

Those same writers think of Michigan State’s history as Duffy Daugherty getting lucky with a handful of southern Black athletes sent to him by a segregationist coach, Alabama’s Bear Bryant. I once read in ESPN article that said Bryant told Duffy about Bubba Smith, the Spartans’ College Football Hall of Fame defensive end on the Michigan State’s 1965 and 1966 national championship teams.

Wrong again. What does Bear Bryant in Tuscaloosa, Alabama, know about a kid in Beaumont, Texas, long before sophisticated recruiting services?

Bubba’s father called up Duffy and asked him to take his son because Willie Ray Smith Sr., like other southern Black high school coaches during segregation, trusted Duffy.

The national media’s knowledge of college football integration history is so simplistic and distorted by 1970 USC-Alabama myths and fiction they don’t understand Bryant had virtually zero knowledge of Black athletes in the South in the 1960s. To this date too many think Sam Cunningham led college football into the 20th century based on fictional scenes in a failed movie script that 1970 USC linebacker John Papadakis wrote two decades later. They don’t understand 28 of 31 major football programs in the South (including Alabama) had recruited Black athletes before USC arrived in Birmingham.

Tucker, like Mark Dantonio, long ago made it clear he doesn’t consider Michigan State a steppingstone. That was Dantonio’s comment when he was mentioned for the Texas job that opened in 2014 after the Spartans won the Rose Bowl.

Let’s also address labeling Tucker as a career assistant — and thus not worthy of his salary — because he didn’t land his first job as a head coach until age 47.

The media doesn’t build up Black candidates as boy geniuses. That’s left to young white coaches like John Gruden, Lane Kiffin and Steve Sarkisian. What we know now about Gruden and his Proud Boys attitudes didn’t matter when  national football writers made the rounds in the 1990s, regurgitating each other’s stories as they pumped Gruden as a future head coach.

Tucker — or a Super Bowl winning coach such as Pittsburgh’s Mike Tomlin — could have had a similar resumes as Gruden in their 30s, but it wouldn’t matter. Black coaches aren’t celebrated as a boy genius.

Although it’s true Tucker left Colorado after only one year, he did so for a what he considered a dream job. He wasn’t leaving Colorado for other 2020 openings out there at schools such as Washington, Mississippi and Arkansas.

Tucker isn’t Darryl Rogers, who made a lateral move (less than lateral?) to Arizona State once he realized he had alienated Detroit’s high school coaches and couldn’t recruit against Michigan.

He, thankfully, isn’t George Perles, who upon winning the 1987 Big Ten title and Rose Bowl turned into an ego maniac to annually use offers from the NFL as leverage. First, for pay raises and then to gain a dual role as athletic director – an outdated concept in college athletics by the 1990s.

He isn’t Nick Saban, whose name was annually mentioned as an NFL or college candidate until finally he left for LSU. And, by the way, one of the reasons he gave up on Michigan State was an inability to recruit against Michigan. LSU doesn’t have an in-state rival.

He has a lot of Duffy Daugherty in him.

Duffy turned down a lucrative deal from Texas A&M in 1958. In 1963, Notre Dame wanted Duffy. Michigan State president John Hannah met with Duffy in his hotel suite after a game at USC. He told Duffy he didn’t want to lose him. He gave Duffy what he wanted to stay – reporting only to Hannah.

Hannah and Duffy knew what Michigan State was – college football’s first fully integrated rosters on its way to back-to-back national titles, in 1965 and 1966.

Tucker and Stanley – and apparently Ishbia and St. Andre as well – know what Michigan State can be with the right coach and resources.